Steps to Make Classrooms More Culturally Responsive. (This is the first post in a four-part series) The new question-of-the-week is: What are specific ways to make lessons more culturally responsive and culturally sustaining? 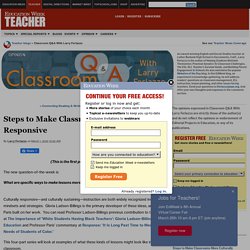 Culturally responsive—and culturally sustaining—instruction are both widely recognized instructional mindsets and strategies. Gloria Ladson-Billings is the primary developer of these ideas, and Django Paris built on her work. You can read Professor Ladson-Billings previous contribution to this column at The Importance of 'White Students Having Black Teachers': Gloria Ladson-Billings on Education and Professor Paris' commentary at Response: 'It Is Long Past Time to Meet the Needs of Students of Color.' Choice page. Operas by Black Composers Have Long Been Ignored. Explore 8. That “Porgy and Bess” — written by three white men, the Gershwin brothers and DuBose Heyward — has become known as the quintessential opera of the black American experience is a symbol of both the systemic racism found throughout the arts and the specifically slow-to-modernize nature of the operatic canon. 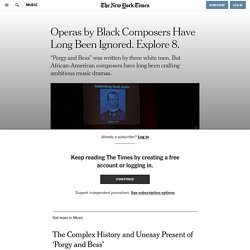 (It opens the Metropolitan Opera’s season on Sept. 23.) But though they’ve been ignored or underheard, African-American composers have long been crafting ambitious music dramas. Some of the works cited below exist in complete editions, ready to be programmed. Others are still emerging, thanks to the work of scholars reversing decades of neglect. I’m a Black Feminist. I Think Call-Out Culture Is Toxic. For example, when I worked to deprogram incarcerated rapists in the 1970s, I told the story of my own sexual assaults. 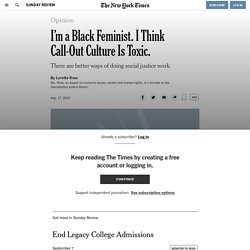 It opened the floodgates for theirs. They were candid about having raped women, admitted having done it to men or revealed being raped themselves. As part of our work together, they formed Prisoners Against Rape, the country’s first anti-sexual assault program led by men. I believe #MeToo survivors can more effectively address sexual abuse without resorting to the punishment and exile that mirror the prison industrial complex.

Nor should we use social media to rush to judgment in a courtroom composed of clicks. Decolonizing The Music Room - Home. Exploring Cultural Appropriation in Choral Music. ’s Use of Your Data. ’s Use of Your Data. Gullah Geechee community finally credited with song “Kumbaya" - Baileyblog. February 4, 2018 Many a camper in America and around the world know the camp favorite, “kumbaya.” 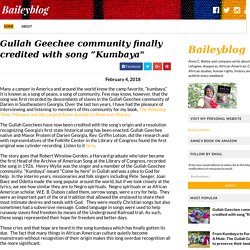 It is known as a song of peace, a song of community. Few may know, however, that the song was first recorded by descendants of slaves in the Gullah Geechee community of Darien in Southeastern Georgia. Over the last ten years, I have had the pleasure of interviewing and listening to members of this community for my book, The Weeping Time: Memory and the Largest Slave Auction in American History. How Leaders Around the World Build Trust Across Cultures. Executive Summary In focus group interviews with American, Asian, Latin American, and Middle Eastern executives, we’ve distilled three things that top executives do to build trusting relationships: they start with the right mindset, they learn about their colleagues’ backgrounds, and they understand the importance of results and character in building trust. Many managerial positions require frequent communication with employees from around the world, but building trust across cultures can be difficult.

Still, it is vitally important; when individuals trust one another, they can work together effectively regardless of cultural differences. But how do you build this cross-cultural trust? Tumblr. 12 Ways to Support English Learners in the Mainstream Classroom. Chimamanda Ngozi Adichie: The danger of a single story. Four Ways Teachers Can Support Students of Color. Why Students and Researchers Say Conversations on Race Should Begin with Humility. Culturally Responsive Teaching: 4 Misconceptions.

3 Tips to Make Any Lesson More Culturally Responsive. Culturally Responsive Teaching: 4 Misconceptions. Know Your Terms: Code Switching. One and All. In a time of division and uncertainty for our country, many of us — teachers, school leaders, parents — are asking, “What can we do?” 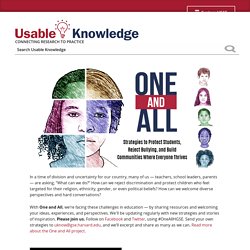 How can we reject discrimination and protect children who feel targeted for their religion, ethnicity, gender, or even political beliefs? How can we welcome diverse perspectives and hard conversations? With One and All, we’re facing these challenges in education — by sharing resources and welcoming your ideas, experiences, and perspectives. We'll be updating regularly with new strategies and stories of inspiration. One and All. If You Think Racism is Too Political For Your Classroom, Think About What Your Silence Says.

Whiteprivilege. UnpackingTheKnapsack. Resources for Addressing Racism and Hatred in the Classroom. Just getting underway, the 2017–18 school year looks to be one filled with difficult classroom conversations about current events. 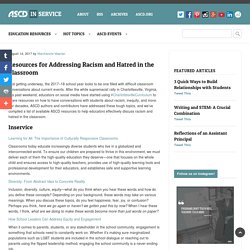 The Racist Origins of Private School Vouchers - Center for American Progress. About three and a half hours southwest of Washington, D.C., nestled in the rolling hills of the Virginia Piedmont is Prince Edward County, a rural community that was thrust into the history books more than 60 years ago when county officials chose to close its segregated public schools rather than comply with court-mandated desegregation following the landmark Brown v. 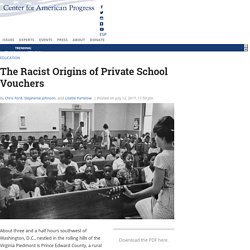 Board of Education of Topeka decision. Like many public school districts in the South during the Jim Crow era, Prince Edward County operated a segregated school system—a system white officials and citizens were determined to keep by any means necessary. The scheme they hatched was to close public schools and provide white students with private school vouchers. Fast forward to 2017: President Donald Trump and U.S. Race in the Classroom: There's a Manual for That. Culturally Responsive Practice in the Music Classroom - National Association for Music Education (NAfME) Culturally Responsive Practice in the Music Classroom A Transcript of the March 27, 2017, NAfME Council for IN-Ovations Twitter Chat NAfME’s Council for IN-Ovations is the home for innovative ideas in all areas of music education, including emerging ensembles (i.e., world and popular music) and digital media. 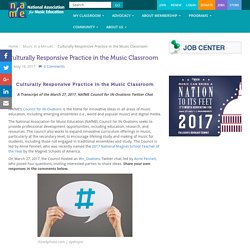 The National Association for Music Education (NAfME) Council for IN-Ovations seeks to provide professional development opportunities, including education, research, and resources. The council also works to expand innovative curriculum offerings in music, particularly at the secondary level, to encourage lifelong study and making of music for students, including those not engaged in traditional ensembles and study. The Council is led by Anne Fennell, who was recently named the 2017 National Magnet School Teacher of the Year by the Magnet Schools of America. How to Find Old Maps Online. In yesterday's Practical Ed Tech Live episode I answered a question about where to find old maps to layer in Google Earth. 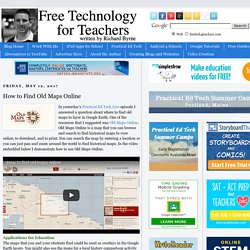 One of the resources that I suggested was Old Maps Online. Old Maps Online is a map that you can browse and search to find historical maps to view online, to download, and to print. You can search the map by entering a location or you can just pan and zoom around the world to find historical maps. Beyonce Fosse. Talking About Race in Mostly White Schools. In past articles (here and here, for example), Usable Knowledge has explored the dynamics of talking about race in schools, especially in the aftermath of incidents of bias or trauma. 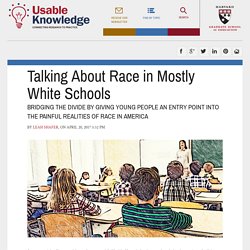 The assumption has been that race is a pressing and relevant topic, one that educators and students are, or should be, actively seeking to confront. But in segregated schools where most people are white or majority-identified, are those conversations happening? Cast 5 stereotype threat r. Personalized Learning, the Navajo Way.

To Connect Across Cultures, Find Out What You Have in Common. Jennifer Maravillas FOR HBR The first thing most of us do when working with people from a new culture is to learn about differences. And there are very sensible reasons to do so. It helps you avoid cultural faux pas. For example, if your Korean employee will likely be embarrassed if you praise him in public, it would be good to know that ahead of time so you can anticipate his reaction and alter your own behavior plan. 83% Of America's Top High School Science Students Are The Children Of Immigrants. Four Ways Teachers Can Support Students of Color.

ProjectImplicit. 249 665 1 PB. Eight Actions to Reduce Racism in College Classrooms. Last year, at dozens of colleges and universities across the United States, students protested institutional unresponsiveness to pervasive issues of racial inequity. Most media attention disproportionately focused on the popularity of the protests as opposed to the actual issues underlying campus unrest. For example, instead of deeply exploring the experiences that ignited demonstrations among students at the University of Missouri, journalists wrote mostly about the football team’s threat to cancel its game against Brigham Young University, the potential financial implications of the team’s activism, and the eventual resignations of the system president and the chancellor of the university’s flagship campus.

Do's & Don'ts for Teaching English-Language Learners. The number of English language learners in the United States is growing rapidly, including in many states that have not previously had large immigrant populations. As teachers try to respond to the needs of these students, here are a few basic best practices that might help. We have found that consistently using these practices makes our lessons more efficient and effective. A Strength-Based Approach to Teaching ESL.