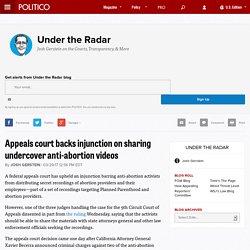 However, one of the three judges handling the case for the 9th Circuit Court of Appeals dissented in part from the ruling Wednesday, saying that the activists should be able to share the materials with state attorneys general and other law enforcement officials seeking the recordings. The appeals court decision came one day after California Attorney General Xavier Becerra announced criminal charges against two of the anti-abortion activists involved for allegedly violating state laws against recording of "confidential" conversations.

Former Christie ally sentenced to 24 months in Bridgegate scandal. Cops Win Another Round Pursuing the Prosecutor Who Pursued Them. When Freddie Gray died in Baltimore in April 2015, the city’s chief prosecutor, Marilyn Mosby, wasted no time in doing what prosecutors in other police-related deaths of African Americans had been slow to do: She went after the cops. 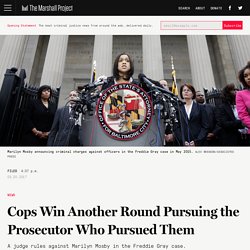 Within two weeks, Mosby rushed ahead of a grand jury to charge six officers in Gray’s death. Judge won't dismiss Bergdahl case over Trump's verbal attacks. Untitled. Photo by Bruce Marlin In 1992, an elderly woman in New Mexico bought coffee at a McDonald's drive through, spilled it on herself, and successfully sued for nearly $3 million. This story is the poster child for the absurdity of the American legal system. Nearly every late night comic has a bit about suing over hot coffee. For The First Time, Federal Judge Tosses Cell Phone 'Stingray' Evidence Obtained Without A Warrant. The Story Behind the Miranda Warning. James C. asks: Who was Miranda from the Miranda rights? 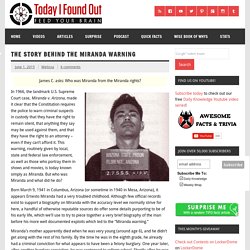 In 1966, the landmark U.S. Supreme Court case, Miranda v. The Stealth Corporate Takeover of the Supreme Court. The three cases now awaiting decision will test how far the Court’s conservative bloc is willing to ride the Chamber’s campaign to restore, via a new but functionally equivalent suite of rules, the early 20th century constitutional regime that empowered an arch-conservative federal judiciary to trump statutory protections for consumers, workers, and other constituencies. 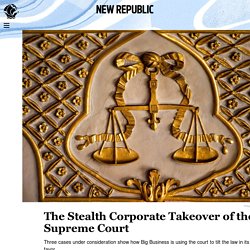 Of the three pending cases, the most audacious, Spokeo, Inc. v. Robins, is a constitutional challenge to a Fair Credit Reporting Act provision, added to the original 1970 Act in 1996 after extensive hearings on the industry’s uneven fact-checking practices. This law authorizes consumers to sue credit reporting agencies, including internet-era data aggregators like defendant Spokeo, for damages up to $1,000, when such an agency disseminates false information about them. Ex-officer convicted in Matthew Ajibade case allowed to serve time on weekends. A former Georgia sheriff’s deputy, convicted for using a stun gun on a restrained detainee who later died alone in his cell, was sentenced on Friday to one month in jail and three years’ probation. 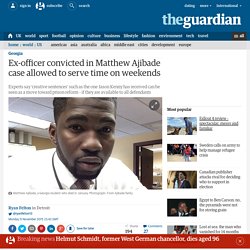 His conviction for cruelty of an inmate carried jail time of up to three years. But significantly shorter jail time was not the only way Chatham County superior court judge James Bass issued a more lenient sentence: he also allowed the former deputy to serve his time on the weekends. While experts say weekend-only jail sentences are not unheard of, they are not common, either.

John Oliver Takes Apart Republicans for Reaction to Gay Marriage Rulings. Father: Teen Jailed For Facebook Comment Beaten Up Behind Bars : All Tech Considered. Nation Thankful That Shellie Dean Zimmerman Was Charged With Perjury At Least. WASHINGTON—Saying that, hey, it beats nothing, Americans across the nation expressed gratitude today that Shellie Dean Zimmerman, the Florida woman accused of lying to police about husband George Zimmerman’s finances while he was imprisoned this year for the death of teenager Trayvon Martin, has been officially charged with perjury under state law. 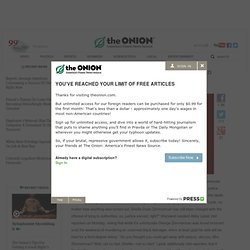 In Our Defense, These Were Some Pretty Fucked-Up Laws And We Were Ordered To Deliberate In Accordance With Them. The tragic death of Trayvon Martin and subsequent trial of George Zimmerman have been hotly debated across the country for the last 16 months. 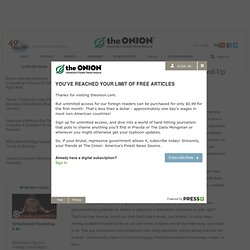 The Structure of Lies in Conservative Jurisprudence. Watching the Watch List: Landmark Case Goes to Trial over Massive U.S. Terrorism "No-Fly" Database. Loading Koch Industries Website Too Many Times In 1 Minute Just Cost This Truck Driver $183,000. In Florida, A Turf War Blooms Over Front-Yard Vegetable Gardening : The Salt. Judge Dismisses Lawsuit Against Obama Administration In Drone Strike Attacks. Growing Pot Got These Siblings As Much Prison Time As Driving Drunk And Killing Someone. In Missouri, if you kill someone while driving drunk, you could go to prison for -- at most -- 15 years. 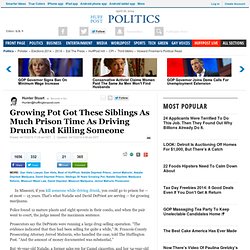 That's what Natalie and David DePriest are serving -- for growing marijuana. Police found 12 mature plants and eight sprouts in their condo, and when the pair went to court, the judge issued the maximum sentence. Prosecutors say the DePriests were running a large drug-selling operation. Lavabit found in contempt for trolling the FBI with 4-point font. Ladar Levison, the privacy-protecting email entrepreneur, has lost his appeal after punking the FBI in court. 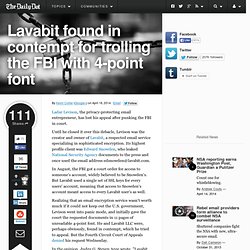 Until he closed it over this debacle, Levison was the creator and owner of Lavabit, a respected email service specializing in sophisticated encryption. Its highest profile client was Edward Snowden, who leaked National Security Agency documents to the press and once used the email address edsnowden@lavabit.com. In August, the FBI got a court order for access to someone's account, widely believed to be Snowden's. Out-of-control judges’ new craze: Using electroshock and tasers on defendants! “Stop,” Judge Nalley said. “… principles of common right and common reason are …” King said. 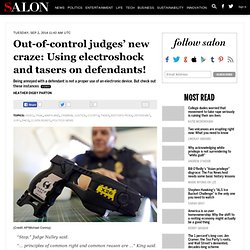 “Mr. Law in the Raw. The Secret Darkness of Grand Juries. WATCH: Florida judge flips out when attorney claims black man fled to avoid getting shot by cops. A Florida judge reacted angrily when a defense attorney suggested his client fled police because he feared officers would shoot him because he’s black. Police arrested 26-year-old Stephen Hall Clarke early Monday after a brief pursuit that began when a bullet was fired at a Fort Lauderdale police officer’s unmarked patrol car and grazed the plainclothes officer’s head, reported the Sun Sentinel. Upskirt Photos Of Teen In Oregon Store Is Not Illegal. Decision to Keep Garner Grand Jury Minutes Secret Continues the Crime. Yesterday afternoon, a Staten Island judge named William Garnett denied a motion by five different parties to unseal the grand jury minutes in the Eric Garner case.

Judge Reduces Child Rapist's Sentence Because He 'Didn't Intend To Harm' The Toddler. In A.I.G. Case, Surprise Ruling That Could End All Bailouts. Photo. Huffingtonpost. Court: We Can’t Rule on NSA Bulk Data Collection Because We Don’t Know Whose Data Was Collected. On Friday, an appeals court overturned a U.S. District Court decision last May that had declared that the National Security Agency’s bulk collection of Americans’ phone records was beyond the authorization of the law.

The three-judge panel of the U.S. Court of Appeals for the District of Columbia Circuit kicked the matter back to the lower court for additional deliberation. The decision did not declare the NSA’s program, which was revealed by whistleblower Edward Snowden in 2013, to have been legal or constitutional. Sotomayor Says Supreme Court Has 'Shoot First, Think Later' Approach To Cop Violence.