Investigative journalism from a nonprofit newsroom 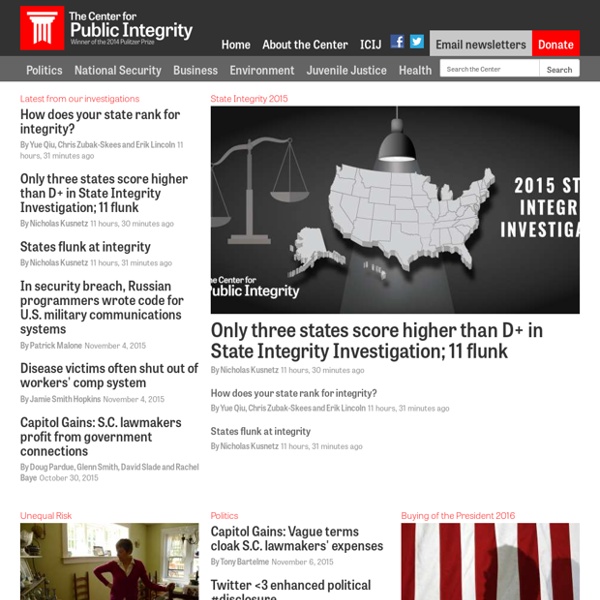 10+ Independent Online News Sources and Why America Needs More of Them A poll done by the Pew Research Center, in September of 2011, found that, “Fully 66% (of the public) say news stories often are inaccurate, 77% think that news organizations tend to favor one side, and 80% say news organizations are often influenced by powerful people and organizations.” A more recent Gallup poll, taken in September of 2015, showed that 60% of Americans still do not trust the mass media to deliver the news fully, accurately and fairly. These numbers are not so much a bleak outlook but evidence that the public is finally beginning to realize that the mainstream media cannot be trusted – a good thing and perhaps a catalyst for change. Americans need to understand what is really happening in our country and the rest of the world by reading, watching and listening to a variety of news sources, not only the mainstream media.

What is ALEC? - ALEC Exposed What is ALEC? ALEC is not a lobby; it is not a front group. It is much more powerful than that. Through the secretive meetings of the American Legislative Exchange Council, corporate lobbyists and state legislators vote as equals on ‘model bills’ to change our rights that often benefit the corporations’ bottom line at public expense. ALEC is a pay-to-play operation where corporations buy a seat and a vote on ‘task forces’ to advance their legislative wish lists and can get a tax break for donations, effectively passing these lobbying costs on to taxpayers.

Ownership Chart: The Big Six Broadcasters make billions in profits while using the public airwaves for free. In return, they are supposed to provide programming that fulfills community needs. Instead, lobbyists have successfully fought to make it easier for broadcast companies to gobble up even more free airspace while doing less to serve the public. Take Action to end the big broadcast swindle. 2011 Revenue: $6.2 billion Press Accuracy Rating Hits Two Decade Low Public Evaluations of the News Media: 1985-2009 Overview The public’s assessment of the accuracy of news stories is now at its lowest level in more than two decades of Pew Research surveys, and Americans’ views of media bias and independence now match previous lows. Just 29% of Americans say that news organizations generally get the facts straight, while 63% say that news stories are often inaccurate. In the initial survey in this series about the news media’s performance in 1985, 55% said news stories were accurate while 34% said they were inaccurate. That percentage had fallen sharply by the late 1990s and has remained low over the last decade.

Challenging Mass Media: It’s Time for the Truth “Global Research is the leading research source on the fundamental issues of war and peace, imperialism and resistance, on the financial crises and the alternatives… Prof Chossudovsky has provided a forum for cutting edge critical essays which challenge the principle pundits of the mass media.” – JAMES PETRAS (click for full list of articles) Bartle Professor Emeritus, Binghamton Universiy (New York) Research Associate, IDS St. Mary’s University (Halifax, Nova Scotia) The destruction of the environment, the growing deficit of social justice, civil liberties, economic depression, the gnawing of worker’s rights, media disinformation, and so many other topics are all regularly focused on by Global Research.

Here Are The Most- And Least-Trusted News Outlets In America News outlets like CNN and ABC News might have the biggest audiences, but they're not the most trusted across-the-board in America. The most trusted news outlets in America, according to a new study from Pew Research Center, are actually British. BBC and The Economist top the list of outlets that are trusted by every ideological group, while BuzzFeed and The Rush Limbaugh Show are at the bottom. Check out the chart: Pew Research Center

The World Factbook People from nearly every country share information with CIA, and new individuals contact us daily. If you have information you think might interest CIA due to our foreign intelligence collection mission, there are many ways to reach us. If you know of an imminent threat to a location inside the U.S., immediately contact your local law enforcement or FBI Field Office. 13 Most Trusted News Sites You Should Bookmark Fake news is a big issue right now. News companies are in the pockets of mega-billionaires. Media bias, inaccurate reporting, and sensationalism are on everyone’s mind. We are in an age where we don’t trust the people reporting the news.