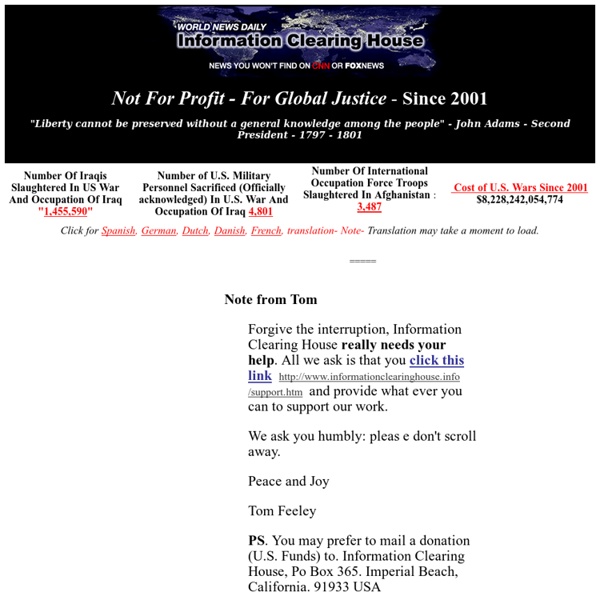 Our Fundraiser Is A Disaster!! I have to admit to being pretty useless at raising funds. I have to admit that I would prefer to read and research article that add to our awareness and respect for others, rather than creating graphics and crafting slick PR slogans that pluck at the heart strings and emotions of ICH readers. In Fact I refuse To Do So. I have more respect for you and myself than to use such methods. I will simply state the facts.

Greece Could Seize Personal Assets; Portuguese banks gamble with government debt - ValueWalk Greeks have to declare all their wealth From January 2017, 8.5 million Greek citizens have to file a declaration of their belongings. The government is on the hunt for real estate, jewellery, art and even cash – outside the banking system. Before government implements new tax, a directory of the soon-taxed wealth has to be prepared. Today Greece is required to auction public riches to service their debt.

GlobalResearch.ca - Centre for Research on Globalization The antioxidant myth is too easy to swallow When the press release arrived in our inboxes, we knew what would happen next. A controversial Nobel laureate had stated, in a peer-reviewed paper he described as "among my most important work", that antioxidant supplements "may have caused more cancers than they have prevented". Even the most fad-friendly sections of the UK media were bound to cover the story. In reality, Professor James Watson – one of the DNA double-helix's founding fathers – was only restating what we at Cancer Research UK (along with many others) have been pointing out for years. Large studies have repeatedly shown that, with the possible exception of vitamin D, antioxidant supplements have negligible positive effect on healthy people, at least in terms of important things such as preventing people getting cancer or dying prematurely. And some supplements – notably vitamins A, E and beta-carotene – even seem to slightly raise the risk of disease and early death.

Democracy Now The Richest 1% Have Captured America's Wealth February 16, 2010 | Like this article? Join our email list: Stay up to date with the latest headlines via email. This is Part II of David DeGraw's report, "The Economic Elite vs. People of the USA." Best Solar Batteries of 2021 The following companies participate in our Accreditation Program: SunLux Energy, SunRun and Vivint Solar Solar batteries are a smart investment for residential energy storage and DIY solar projects. People who want to go off the grid can use solar batteries to store excess energy that can be used at night or on cloudy days. A few solar batteries come in handy if you live in an area with unreliable utilities. You can also use solar power battery storage to run RVs, boats, golf carts and more.

Corporate Watch : Homepage : Latest News from Corporate Watch What Apple's patents reveal about its plans For anybody who wants to know what a company is thinking, just look at its patent portfolio. Patents are about protection: without them there's nothing to stop your rivals from copying your best ideas and making money from your hard work. If you patent your revolutionary unicorn-powered laptop and a rival copies you, you'll be able to sue them until they squeak - and possibly get their product pulled from the shelves too. Why Our Monkey Brains Are Prone to Procrastination (No, It's Not Just Laziness or Lack Of Willpower) July 4, 2011 | Like this article? Join our email list: Stay up to date with the latest headlines via email. The Misconception: You procrastinate because you are lazy and can’t manage your time well.

ZNet About 1,600 people have so far signed up on the We Stand Site. We need a great many more for this effort to sustain positive activity.Please Sign. Please take the statement to relatives, friends, schoolmates, and workmates. How Covert Agents Infiltrate the Internet to Manipulate, Deceive, and Destroy Reputations One of the many pressing stories that remains to be told from the Snowden archive is how western intelligence agencies are attempting to manipulate and control online discourse with extreme tactics of deception and reputation-destruction. It’s time to tell a chunk of that story, complete with the relevant documents. Over the last several weeks, I worked with NBC News to publish a series of articles about “dirty trick” tactics used by GCHQ’s previously secret unit, JTRIG (Joint Threat Research Intelligence Group).

To protect the revolution, overcome the false secular-Islamist divide - Opinion It is impossible to exaggerate the significance of the momentous events that have drawn global attention to Egypt as its people continue to struggle with the unfolding drama of their revolution. There are two evidently opportunistic events that have come together to signal a dreadful attempt by the Muslim Brotherhood to claim the entirety of the Egyptian revolution for themselves, pretty much on the same model that the Shia clerics hijacked the Iranian revolution of 1977-1979 - with the crucial difference that Egyptians in their tens of thousands have poured into their streets and are far more alert and vigilant to protect the totality of their revolution than Iranians were more than thirty years ago. The first event revolves around President Morsi grabbing (and then rescinding) more power than he was granted by the free and fair election that - with a narrow margin - sent him to the presidential palace. But the devil is in the details. What is it exactly that we are witnessing?

Run-up to proxy war over Syria Run-up to proxy war over Syria By M K Bhadrakumar If a date needs to fixed marking the end of "post-Soviet era" in world politics, it might fall on February 4, 2012. Russia and China's double veto of the Arab League resolution on Syria in the United Nations Security Council constitutes a watershed event. Curiously, the secretary general of the North Atlantic Treaty Organization (NATO) Anders Fogh Rasmussen chose the same day as the veto in New York to snub Russia; saying that that the alliance would have the first elements of the US's missile defense system (ABM) up and running in Europe by the alliance's summit in May in Chicago, no matter Moscow's objections. The first double veto by Russia and China on the Syrian issue in the United Nations Security Council last October was a coordinated move that sought to scuttle a resolution that might be seized by the Western alliance to mount a military operation in Syria.