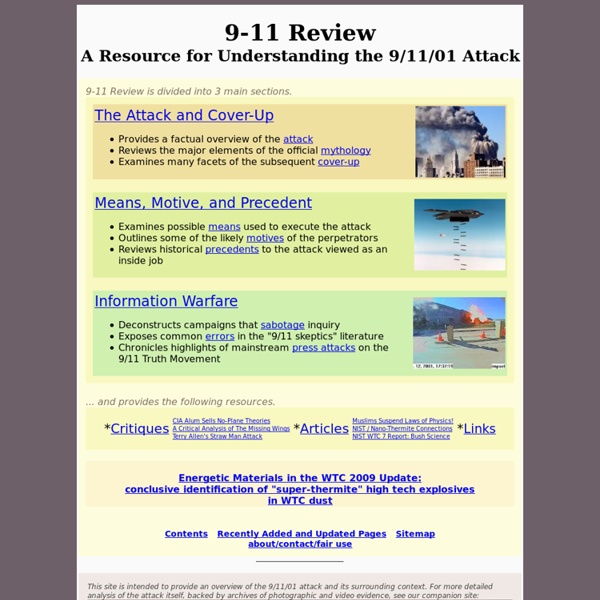 Pilots For 9/11 Truth 911Blogger.com | Paying Attention to 9/11 Related News davidraygriffin.com | This website is maintained by Edward Rynearson (not by Dr. Griffin himself). For additional information, please visit the "about" section (under "The Pages," below). The 9/11 Consensus Points Factual Evidence Contradicts the 9/11 Story The official account of the events of September 11, 2001, has been used: to justify the wars in Afghanistan and Iraq, which have resulted in the deaths of over a million people; 1 to authorize torture, military tribunals, and extraordinary rendition; andto suspend freedoms guaranteed by the American Constitution such as habeas corpus in the USA, and similar freedoms in Canada, the UK, and other countries. The official claims regarding 9/11 are contradicted by facts that have been validated by a scientific consensus process, and which include the following points of “best evidence”. The 37 Consensus Points are divided into the nine categories below, which in turn link to the individual 37 points: A. B. C. D. E. F. G. H. I. V. A. Point G-1: A Claim Regarding Osama bin Laden Point G-2: A Claim that there was No Insider Trading in Put Options before September 11, 2001 B. Point TT-3: A Claim Excluding Explosions in the Twin Towers C. D. E. F. G. H. I. V.

911 untersuchen | Persönlichkeiten aus der Schweiz für eine neue, unabhängige 911-Untersuchung 25 Hard Facts About 9/11 That Cannot Be Debunked Sources: Mike Wayne & HANG THE BANKERS In the 14 years since the events of September 11, 2001, independent researchers have assembled a overwhelming body of evidence contradicting the official account. This article (and the accompanying video) presents 25 facts about 9/11 that, taken together, should cause you to seriously question the official story. Links to many supporting articles are given. Polls show that 30% of Americans do not believe the official story. RELATED ARTICLE: Psychologists Explain 9/11 Denial Despite Hard Scientific Evidence And, for those who won’t even consider the possibility that our own government orchestrated 9/11, this article is a must read: RELATED ARTICLE: Dire Warnings From Past U.S. Here is a list of 25 facts that cannot be debunked about 9/11 (from the above video). 1) Nano Thermite was found in the dust at Ground Zero, which is documented in this peer-reviewed report by Bentham Open Chemical Physics Journal. 5) Dick Cheney was in command of NORAD on 9/11.

A Coalition for Major Outreach This 9/11 Anniversary Heather Callaghan | Activist Post We are rapidly approaching 13 years since the tragic events of September 11, 2001, where the facts surrounding the deaths of thousands of Americans continue in suppressed fashion, garnering yearly rehashes of the original narrative. As calendar pages turn, so fades public interest and perhaps attempts at outreach and education regarding the facts. As time goes on, 9/11 truth is teetering on the edge of enmeshment with other obscured events which carry the scarlet letter of “conspiracy theory,” and thus, with a public in the dark, the implausible official stories are passed on, but not legitimately investigated. Ground Zero 911 coalition is determined to prevent the lapse of the facts into an eternal blurry memory hole. As the Ground Zero 911 website states, “This movement was started by the victims’ family members who had questions. On the website, you will find a request for volunteers, donations, and, most importantly, involvement.

10 ways I got sucked into buying the 9/11 cover story By Craig McKee On Sept. 11, 2001, I was part of the majority. I believed that Osama bin Laden had led a group of Islamic fundamentalists to crash planes into the World Trade Center and the Pentagon. There were many things that made me accept this, but mostly it was because I believed what I saw on TV. Sure I was cynical about the media then, but to believe that they got it so wrong would be to believe they were complicit in the cover-up. I believed that the attacks – while reprehensible – were a logical result of America’s imperialist policies around the world. This made me and people who agreed with me valuable dupes for the real criminals. Despite being fooled about 9/11, there were some things that made me immediately suspicious that morning. But even with that doubt, I didn’t seriously doubt the official story. In a way, it’s surprising to me I could be so naive. But the lie was so massive I couldn’t see it. Most of us won’t make the effort. Like this: Like Loading...

Do firefighters believe 9/11 conspiracy theories? In the new season of the FX drama Rescue Me, firefighter Franco Rivera espouses the belief that 9/11 was "an inside job." According to a Sunday New York Times article, the show's writers added this assertion because actor Daniel Sunjata is a "truther"; but the real firefighters on set—who work as script advisers—were offended by his allegations. This got the Explainer wondering: Do any firefighters believe in 9/11 conspiracy theories? Yes. The most common conspiracy theory held by firefighters is that the Twin Towers—as well as a third building, 7 World Trade Center—collapsed not because planes crashed into them but due to a "controlled demolition." Another common theory is that federal agents found three of the planes' four black boxes and then hid or destroyed them because they contained incriminating evidence. Do other professions marshal their own expertise to poke holes in the official story? Got a question about today's news?