The world's most viewed site on global warming and climate change 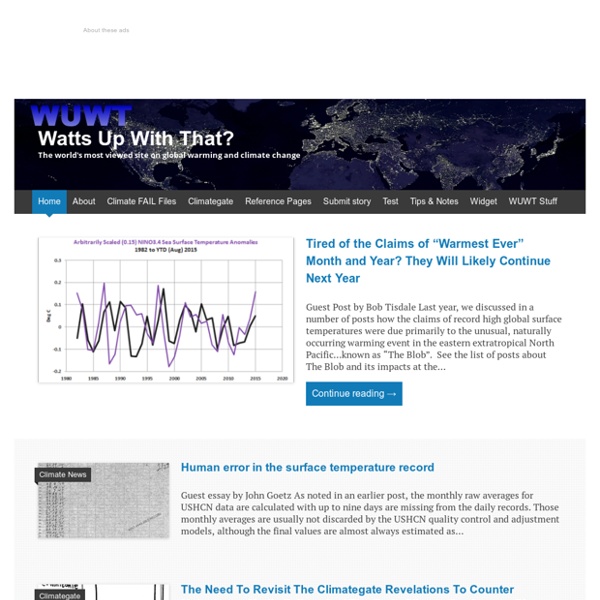 Global warming stopped 16 years ago, reveals Met Office report quietly released... and here is the chart to prove it The figures reveal that from the beginning of 1997 until August 2012 there was no discernible rise in aggregate global temperaturesThis means that the ‘pause’ in global warming has now lasted for about the same time as the previous period when temperatures rose, 1980 to 1996 By David Rose Published: 21:42 GMT, 13 October 2012 | Updated: 13:59 GMT, 16 October 2012 The world stopped getting warmer almost 16 years ago, according to new data released last week. Antarctic ice shelves not melting at all, new field data show High performance access to file storage Twenty-year-old models which have suggested serious ice loss in the eastern Antarctic have been compared with reality for the first time - and found to be wrong, so much so that it now appears that no ice is being lost at all. "Previous ocean models ... have predicted temperatures and melt rates that are too high, suggesting a significant mass loss in this region that is actually not taking place," says Tore Hattermann of the Norwegian Polar Institute, member of a team which has obtained two years' worth of direct measurements below the massive Fimbul Ice Shelf in eastern Antarctica - the first ever to be taken. According to a statement from the American Geophysical Union, announcing the new research: It turns out that past studies, which were based on computer models without any direct data for comparison or guidance, overestimate the water temperatures and extent of melting beneath the Fimbul Ice Shelf.

What's going on in Ukraine? Ukrainian tanks are transported from their base in Perevalne, Crimea, on Wednesday, March 26. After Russian troops seized most of Ukraine's bases in Crimea, interim Ukrainian President Oleksandr Turchynov ordered the withdrawal of armed forces from the peninsula, citing Russian threats to the lives of military staff and their families. Ukrainian marines wave as they leave a base in Feodosia, Crimea, on Tuesday, March 25. Russian sailors stand on the deck of the corvette ship Suzdalets in the bay of Sevastopol, Crimea, on March 25. Pro-Russian militia members remove a local resident as Russian troops assault the Belbek air base, outside Sevastopol, on Saturday, March 22.

ALEC Exposed Progressive Policies Win at the Ballot Box Ballot measures across the country passed on November 8th highlighting the fact that progressive values still resonate with the U.S. electorate. Gains were made even in the face of industry deception and big dollar ad campaigns. In a victory for climate activists and solar energy, Floridians voted down Amendment 1, a constitutional amendment which would have made it hard for people with solar panels to sell energy back to the grid. Read the rest of this item here.

Please Don’t Print this Blog …You’ll be a tree killer and global warming enabler or something if you do. While we’re talking about environmental murder, it is with great pleasure that I take on global warming with today’s episode of Stutistics. In case you missed the debut a few weeks ago, Stutistics is my new series on GBTV that gives you a shareable, digestable, and understandable way to absorb stats that will help defeat your annoying friends in arguments. 509 Bandwidth Limit Exceeded "Effective execution of Agenda 21 will require a profound reorientation of all human society, unlike anything the world has ever experienced a major shift in the priorities of both governments and individuals and an unprecedented redeployment of human and financial resources. This shift will demand that a concern for the environmental consequences of every human action be integrated into individual and collective decision-making at every level."- excerpt, UN Agenda 21 Agenda 21 – The UN Blueprint for the 21st Century

nzclimatescience.net - Science Posted 26 April 2016 A new book by one of our Coalition foundation member scientists, Dr Gerrit van der Lingen, has been reviewed by the distinguished Dutch scientist, Dr Hans Labohm, who writes: "All in all, 'The Fable of a Stable Climate' shows a wide and solid knowledge of the subject. Moreover, Gerrit van der LIngen has the talent to clearly explain the complicated problems, whch makes his writings very accessible for a broad public. In other words: his book reads like a riveting novel.

‘Green is the New Red:’ GBTV Discusses Global Warming and Radical Factions of Environmentalism The U.N. Conference on Sustainable Development closed Friday in Rio de Janeiro after having brought 100 world leaders and more than 45,000 people to Brazil to discuss reconciling economic and environmental aspirations. While the global summit itself has already cost tens of millions of dollars, world-wide adoption of far-reaching policy to address global warming may end up costing more. Glenn Beck sat down with several authors and analysts during his broadcast Friday who are skeptical of global warming and the effects of policy aimed at advocating green jobs. Twenty years ago the U.N. held the same summit in Rio that would give birth to a renewed enthusiasm in environmentalism and global warming awareness. The panel on GBTV Friday broke down the views and policy advocated by activists coming out of Rio in 1992, and how their predictions have proven to be inconsistent and extremely expensive.

About The Sleuth Journal is an independent alternative media organization comprised of individuals and groups working to expose true news and corruption worldwide. We shed the light on truth in government, politics, world and local news, civil rights, natural health & organics and other important topics that the mainstream media fails or refuses to expose. This information is being presented to you in an effort for advancement in the understanding of our economic and political corruption, our Nation and World’s true news, social justice, human rights and the New World Order.