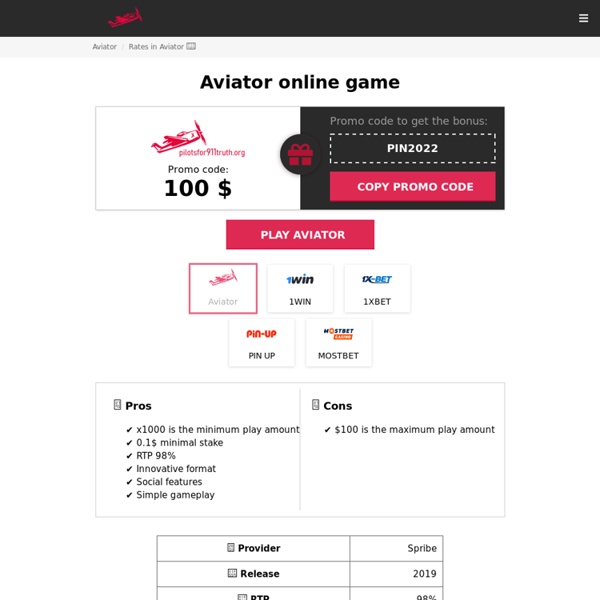 Pilots for 9/11 Truth is an organization of aviation professionals and pilots throughout the globe who have gathered together for one purpose. We are committed to seeking the truth surrounding the events of the 11th of September 2001. Our main focus concentrates on the four flights, maneuvers performed and the reported pilots. We do not offer theory or point blame at this point in time. However, we are focused on determining the truth of that fateful day based on solid data and facts -- since 9/11/2001 is the catalyst for many of the events shaping our world today -- and the United States Government does not seem to be very forthcoming with answers or facts.

Flight 77 Passengers - 9/11 Review We are told that there were 64 passengers were on board Flight 77. We count 59, including 6 crew members. Skygate 911 (Full Film) by Pilots For 911 Truth Source:John DoeX You are the jury as new and existing evidence is presented with regard to the aviation related events of September 11, 2001. Analysis of evidence by Pilots for 911 Truth includes an in-depth study of the Departure Gate at Dulles, In-Flight navigation, and data provided by government agencies that far exceeds the capabilities of the alleged 911 aircraft. Evidence is presented that makes a strong case for new independent investigation into the events that changed our world.

A Coalition for Major Outreach This 9/11 Anniversary Heather Callaghan | Activist Post We are rapidly approaching 13 years since the tragic events of September 11, 2001, where the facts surrounding the deaths of thousands of Americans continue in suppressed fashion, garnering yearly rehashes of the original narrative. As calendar pages turn, so fades public interest and perhaps attempts at outreach and education regarding the facts. As time goes on, 9/11 truth is teetering on the edge of enmeshment with other obscured events which carry the scarlet letter of “conspiracy theory,” and thus, with a public in the dark, the implausible official stories are passed on, but not legitimately investigated. Ground Zero 911 coalition is determined to prevent the lapse of the facts into an eternal blurry memory hole. They are hosting a three-day event, starting Thursday September 11, to bring major awareness and keep justice and accountability alive at Ground Zero near the 9/11 Memorial & Museum.

Report: 15 of the 19 "hijackers" on 9/11 were CIA agents, never on the plane » Intellihub (INTELLIHUB) — According to a newly released report, 15 of the 19 Saudi Arabian “hijackers” were actually CIA agents who were, at the time, covertly working with rogue factions of the U.S. Military Industrial Complex to carry out a sinister multifaceted, multi-vectored, plot to loot billions if not trillions of taxpayer dollars from the Corporation of the United States, later funneling the loot into private corporations through defense appropriated funding and numerous no-bid contracts related to the roll-out of the PATRIOT Act. Additionally the report concludes that the hijackers never physically boarded any the alleged “hijacked” airliners, which were purported to have crashed into the Pentagon and Towers 1 and 2 of the World Trade Center, which at the time was an iconic American monument in New York. Press TV reports:

Debunking the 9/11 Myths: Special Report - The Planes Plain View: Passenger windows on a piece of Flight 175's fuselage. (Photograph by William F. Baker/FEMA) The Planes Do firefighters believe 9/11 conspiracy theories? In the new season of the FX drama Rescue Me, firefighter Franco Rivera espouses the belief that 9/11 was "an inside job." According to a Sunday New York Times article, the show's writers added this assertion because actor Daniel Sunjata is a "truther"; but the real firefighters on set—who work as script advisers—were offended by his allegations. This got the Explainer wondering: Do any firefighters believe in 9/11 conspiracy theories? Yes.

Secret barometric bomb technologies, nuclear technologies, used to bring WTC towers down: Proof » Intellihub (INTELLIHUB) — Although it’s now public knowledge that former Florida Sen. Bob Graham told the Tampa Bay Times that the secret 28 pages of the 9/11 Commission report are poised to be released within the next few months, one can only question what the White House’s new and urgent motive for their release is. One thing comes to mind, right off the bat, and that is the fact that strong evidence exists suggesting that up to three thermonuclear devices were detonated at the World Trade Center site on 9/11, hence the nickname “Ground Zero.” I mean, what better way than to dupe the people yet once again by slowly conditioning them, over an extended period of time, to accept the fact that criminal factions of their very own government orchestrated the Pearl Harbor-like attack onto skyscrapers, buildings, in an American city. “Tritium is an important component in nuclear weapons. “[The high-voltage pattern] produces sort of a stairway pattern in the molecular structure of the cloud.

Search Engine Manipulation. Google and YouTube Suppress Controversial 9/11 Truth? Let’s Make 9/11 Truth Go Viral Global Research is committed to Counter-propaganda. Forward this article far and wide. Post it on social media, cross-post it on blog sites and independent media. Here are 10 things about 9/11 that deserve more attention – and 5 that deserve less People need to know just how absurd the official story of the Shanksville “crash” is. By Craig McKee Let’s face it: the 9/11 Truth Movement is all over the place. The Incredible 9-11 Evidence We've All been Overlooking In trying to piece together what really happened on September 11, a lot of work has been done — much of it useful and interesting — into those 'hijacked' flights for which the publicly-available evidence is sketchy and contradictory. There are web sites for instance wholly dedicated to investigating the true fate of Flight 93 and others that attempt to get a clearer idea of what really happened at the Pentagon. Both these incidents however are characterised by a pronounced absence of substantive material evidence and it is this, I suppose, that raises our suspicions and curiosity.

Is Putin Considering Whether To Expose Evidence, Satellite Photos, Proving 9/11 Was An Inside job? (Before It's News) RT’s “Truthseeker” rips the lid off false flags! | Veterans Today Is the world getting fed up with US-NATO-Israeli false flags? Will nations that are actual or potential victims of these deceptions launch an all-out diplomatic and media effort to expose the 9/11 inside job – the mother of all false flags – and pre-empt future phony or staged “attacks”? They’d have to be crazy not to. by Scientific Panel Investigating Nine-Eleven, 9/11/2001 Abstract Wings that should have been sheared off by the impact are entirely absent. There is also substantial evidence of debris from a much smaller jet-powered aircraft inside the building.