Against Libertarian Populism. Over at The Liberty Conservative (which is, in my opinion, something of an oxymoronic name), Alex Witoslawski of the Leadership Institute recently wrote an article defending populism as a strategy for libertarian activists to embrace. 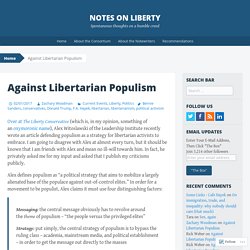 I am going to disagree with Alex at almost every turn, but it should be known that I am friends with Alex and mean no ill-will towards him. In fact, he privately asked me for my input and asked that I publish my criticisms publicly. How Donald Trump Could Build an Autocracy in the U.S. - The Atlantic. 点击这里阅读中文版本 It’s 2021, and President Donald Trump will shortly be sworn in for his second term. The 45th president has visibly aged over the past four years. He rests heavily on his daughter Ivanka’s arm during his infrequent public appearances. The post-truth world of the Trump administration is scarier than you think. You may think you are prepared for a post-truth world, in which political appeals to emotion count for more than statements of verifiable fact. 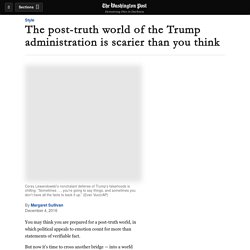 But now it’s time to cross another bridge — into a world without facts. Or, more precisely, where facts do not matter a whit. On live radio Wednesday morning, Scottie Nell Hughes sounded breezy as she drove a stake into the heart of knowable reality: “There’s no such thing, unfortunately, anymore, of facts,” she declared on “The Diane Rehm Show” on Wednesday. Log In. On the other hand, this could end quite badly.

Mr. Thiel, who was last in the news for his financial support of Hulk Hogan’s legal fight against Gawker Media, has a slate of political views that stand out of line with most in tech, and perhaps most Americans. He once wrote that “the 1920s were the last decade in American history during which one could be genuinely optimistic about politics.” After that, he suggested, things went south because, among other things, women were given the right to vote.

This isn’t just a photo of Ivanka Trump. It’s a middle finger to democracy. Donald Trump is leveraging his new position as president-elect to empower his business empire — and he’s doing it publicly. 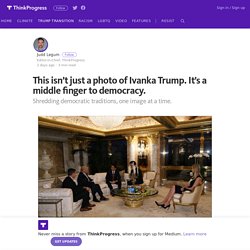 We’ve known for some time that Trump didn’t plan to actually resolve the unprecedented conflicts his far-flung business interests presented. Instead of liquidating his assets and placing them in a Qualified Diversified Trust, as President Bush did, or investing in index funds and government bonds, as President Obama did, Trump has done nothing. He’s waved away concerns about conflicts-of-interest, saying that he would just hand over control of his business interests to his children. He called this a “blind trust” but it is actually the opposite. This Analysis Shows How Fake Election News Stories Outperformed Real News On Facebook - BuzzFeed News. Facebook fake-news writer: ‘I think Donald Trump is in the White House because of me’ 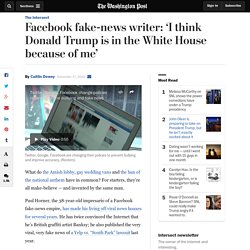