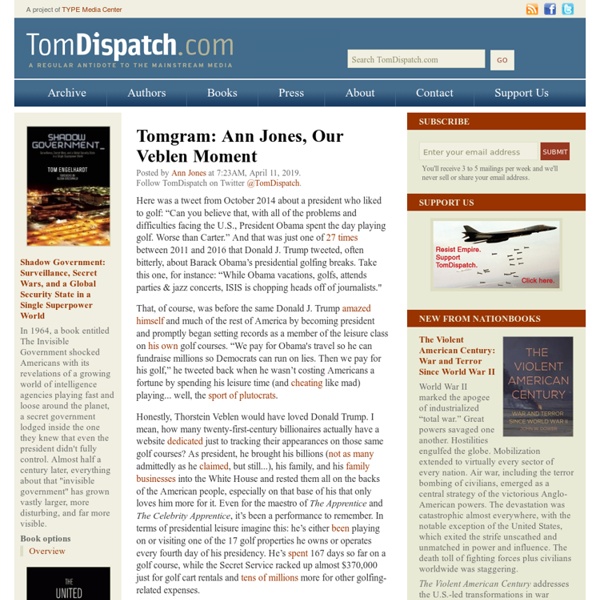 [Note for TomDispatch Readers: We’ve got a special offer for you today. Below, you’ll get a taste of Astra Taylor’s new book about the Internet as a system for inequality, The People’s Platform: Taking Back Power and Culture in the Digital Age. (Musician David Byrne, no less, praises her “inspiring insights” and calls her book “beautifully written and highly recommended.” As is obvious from her intro, Rebecca Solnit also considers it a milestone book.) For a donation of $100 to this website, Taylor will sign a personalized copy of the book to you. And believe me, since TomDispatch is not exactly Google and takes no advertising, every dollar you give really does help keep us afloat.

Naomi Klein Published at The Intercept Now that it seems virtually certain that Donald Trump will withdraw the United States from the Paris climate accord, and the climate movement is quite rightly mobilizing in the face of this latest dystopian lurch, it’s time to get real about something: Pretty much everything that is weak, disappointing, and inadequate about that deal is the result of U.S. lobbying since 2009. The fact that the agreement only commits governments to keeping warming below an increase of 2 degrees, rather than a much safer firm target of 1.5 degrees, was lobbied for and won by the United States.

UCL Institute for Security and Resilience Studies Resilience is the enduring power of a body or bodies for transformation, renewal and recovery through the flux of interactions and flow of events. Welcome to the Institute for Security & Resilience Studies (ISRS). In a globalised, highly networked world, the challenges of security and resilience are faced by us all - whether political leaders, public officials, academics, or developers and suppliers of products and services.

It's the Inequality, Stupid Want more charts like these? See our charts on the secrets of the jobless recovery, the richest 1 percent of Americans, and how the superwealthy beat the IRS. How Rich Are the Superrich? A huge share of the nation's economic growth over the past 30 years has gone to the top one-hundredth of one percent, who now make an average of $27 million per household. The average income for the bottom 90 percent of us? $31,244. Progressive News and Commentary with an Attitude Former Wall Street Goldman Sachs executive Nomi Prins is back with a thoroughly documented historical account of how DC and financial barons are locked at the hip. Accessible and compelling: Buy directly from Truthout by clicking here.

John Nichols Protesters in Wisconsin, 2011, where communities are voting to amend the constitution. (Darren Hauck/Reuters) Even as the US Supreme Court attempts to expand the scope and reach of the already dangerous dominance of our politics by billionaires and their willing servants, Americans are voting in overwhelming numbers against the new politics of dollarocracy. The headline of the week with regard to the campaign-finance debate comes from Washington, where a 5-4 court majority has—with its McCutcheon v. Federal Election Commission decision—freed elite donors such as the politically-ambitious Koch Brothers to steer dramatically more money into the accounts of favored candidates, parties and political action committees.

Narrating the Aberration. Democracy is best defined, in my opinion, by Lincoln’s timeless phrase from his Gettysburg Address as ‘government of the people, by the people, for the people’. The key phrase in this definition is ‘the people’. It is a bit sparse but that eliminates any opening for sophistry or legalistic parsing or, heaven forfend, theological mental reservations. Letter from Birmingham Jail The Letter from Birmingham Jail (also known as "Letter from Birmingham City Jail" and "The Negro Is Your Brother") is an open letter written on April 16, 1963, by Martin Luther King, Jr. Background[edit] The Birmingham Campaign began on April 3, 1963, with coordinated marches and sit-ins against racism and racial segregation in Birmingham, Alabama. The non-violent campaign was coordinated by Alabama Christian Movement for Human Rights and King's Southern Christian Leadership Conference. On April 10, Circuit Judge W. A.

Economic Dreams - Economic Nightmares I spent most of my working life in the US Forest Service, battling fundamentalism. Most of the battles dealt with economics. My first job was to coordinate use of a linear programming model (FORPLAN) in the development of forest plans. The model may (or may not) have been useful in projecting overall timber sales volumes from big-timber forests, but to have used it as an overall planning model was a mistake. James Fallows This morning I had the privilege of giving the commencement address at the University of Vermont—UVM, home of the Catamounts, in Burlington. My wife Deb and I, and our colleague John Tierney, visited UVM several years ago and wrote about it in our American Futures series, notably with John’s piece about the school’s emergence as a “public Ivy.” Seven Days, the financially-and-journalistically successful weekly based in Burlington (which I’ve also written about), has a story about today’s commencement, here. The University’s story is here. Since the talk drew on various themes that recur in this “American Futures” thread, I’m attaching the text, below. Go Catamounts!

The Official Paul Krugman Web Page News!! I am starting up my Princeton web site. It is at www.wws.princeton.edu/~pkrugman/ It's only partial, but eventually all files will move. I'm back! My recent move to New Jersey and other pressures have temporarily prevented me from updating this site. Matt Taibbi on Politics and the Economy Thank You, Rolling Stone | BLOG ENTRY Today is my last day at Rolling Stone. As of this week, I’m leaving to work for First Look Media, the new organization that’s already home to reporters like Glenn Greenwald, Jeremy Scahill and Laura Poitras. I’ll have... February 20, 2014 10:35 AM ET Ex-Morgan Stanley Chief Jams Foot in Mouth, Complains of CEO Abuse | BLOG ENTRY There's a ton of interesting stuff going on in the Wall Street sphere of late – I'm trying to find some time to do a proper write-up of the extraordinary lawsuit just filed by the Better Markets... February 13, 2014 5:30 PM ET The Vampire Squid Strikes Again: The Mega Banks' Most Devious Scam Yet | ARTICLE Call it the loophole that destroyed the world.