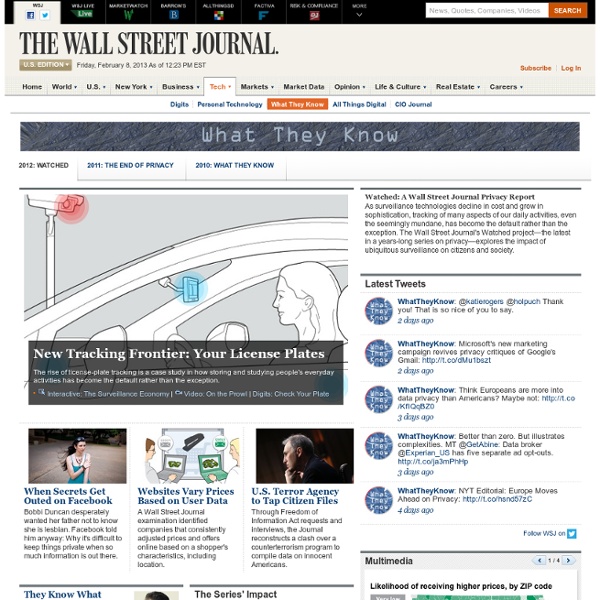 TRAFFIQ — Premium Advertising Marketplace Global Investigative Journalism Network Google Gets a Privacy Deadline Google has a fleet of camera-equipped cars prowling the streets of every major metropolis, snapping endless rounds of photographs for its Street View mapping service. The next time one rolls by, watch out--it could be "accidentally" capturing more than just the front of your house. Back in May, German officials launched a criminal investigation into the company's Street View cars, and found they had been scanning unsecured Wi-Fi networks and collecting private user data--small bits personal information, accessed websites, and email messages. Today, the government set a deadline: Develop new guidelines for data collection or face government regulation. "We need a charter guarding private geographical data and we need it drafted by December 7," de Maiziere told AFP. Google has made several attempts to hedge the controversy.

The Data Bubble The tide turned today. Mark it: 31 July 2010. That’s when The Wall Street Journal published The Web’s Gold Mine: Your Secrets, subtitled A Journal investigation finds that one of the fastest-growing businesses on the Internet is the business of spying on consumers. First in a series. It has ten links to other sections of today’s report. It’s pretty freaking amazing — and amazingly freaky, when you dig down to the business assumptions behind it. Here’s the gist: The Journal conducted a comprehensive study that assesses and analyzes the broad array of cookies and other surveillance technology that companies are deploying on Internet users. It gets worse: In between the Internet user and the advertiser, the Journal identified more than 100 middlemen—tracking companies, data brokers and advertising networks—competing to meet the growing demand for data on individual behavior and interests.The data on Ms. Two things are going to happen here. Improving a pain in the ass doesn’t make it a kiss.

Indicting the US Government for crimes against humanity – unsealing the evidence It is opportune that only a couple of weeks after three-times human rights awardee Bradley Manning presented his case against the US Government for war crimes committed in Iraq and Afghanistan, details have been released (see video trailer above) of a 15 month investigation by the Guardian and the BBC into torture centres in Iraq, coordinated by US Special Forces commander, James Steele, and former US General Petraeus. Add in evidence of system-wide torture and massacres in Iraq and Afghanistan as compiled by the Bureau of Investigative Journalism (see below) with additional evidence from a number of other sources (also below) and what we have is much more than a dossier but an indictment – unsealed and without need for a grand jury – that could form the basis of charges raised against the US Administration either in the World Court or – deliciously turning the tables – at the military tribunal of Bradley Manning. The game is afoot! Note 1. Note 2. Note 3. Note 4. Note 5. Note 6. A. B.

Know Privacy Cookie Madness! I just don’t understand Julia Angwin’s scare story about cookies and ad targeting in the Wall Street Journal. That is, I don’t understand how the Journal could be so breathlessly naive, unsophisticated, and anachronistic about the basics of the modern media business. It is the Reefer Madness of the digital age: Oh my God, Mabel, they’re watching us! If I were a conspiracy theorist — and I’m not, because I’ve found the world is rarely organized enough to conspire (and I found this to be especially true of News Corp. when I worked there, at TV Guide) — I’d imagine that the Journal ginned up this alleged exposé as a way to attack everyone else’s advertising business just as its parent company skulks behind its pay wall and surrenders its own ad business. But I’m not a conspiracy theorist. That’s why I’m confused. The story uses the ominous passive voice of newspaper scare stories: “…a Wall Street Journal investigation has found…” As if this knowledge were hiding.

Tracking James Steele, the alleged coordinator of Iraqi torture centres: US War Crimes Tribunal investigation #1 James Steele today We have tracked down the man identified by The Guardian and the BBC who they alleged supervised death squads and torture squads, first in El Salvador, then Iraq (under General Petraeus). James Steele, named in the joint Guardian/BBC investigation, lives in Texas and operates as a counter-insurgency consultant. Note: Between now and June and the commencement of the Tribunal of the US Government for War Crimes (which the media is myopically reporting as the Trial of Bradley Manning, the person responsible for reporting these war crimes) we will be providing further details of these crimes and who the perpetrators are. To see specific allegations made against Steele and to find out more about the accusations of war crimes against the US Government, click here . A. * From May 2003, until assuming the position of senior counselor to Ambassador Bremer for Iraqi security forces in November 2003, Steele was the senior police adviser with the Iraqi police SWAT unit in Baghdad.

Crystal Ball - Google CEO Schmidt Rekindles Privacy Fears with AI Talk In what has become an all-too familiar rite of technological punditry, techperts are crawling all over the latest comments from Google CEO Eric Schmidt about the future of search being more predictive, pretty much telling people what they want before they know they want it. You know the story. Google has some Matrix- or Inception-like ideal that its search engine will become so personalized that people's behaviors will be guided by the search algorithms anticipating the human impulse and then acting on it. Schmidt recently sat down with Wall Street Journal editors and said (paywall warning): We're trying to figure out what the future of search is ... Here's the example Schmidt provided that raised hackles in many quarters: Let's say you're walking down the street. Later, Schmidt noted: "As you go from the search box [to the next phase of Google], you really want to go from syntax to semantics, from what you typed to what you meant. Depends on your point of view.

eXelate Raises $15 Million For Behavioral Targeting Data Marketplace eXelate, a New York-based provider of data management tools for online publishers and operator of an open marketplace for audience targeting data, has raised $15 million in Series B funding in a round led by Silicon Valley’s Menlo Ventures with participation of Israeli VC firm Carmel Ventures. The latter led the company’s initial $4 million financing round back in October 2007. Menlo Ventures partner Mark Siegel will join Carmel’s Shlomo Dovrat on eXelate’s board, which was recently expanded to include New York Times Company SVP Digital Operations Martin Nisenholtz and IPG’s Mediabrands Ventures CEO Matt Freeman. Since eXelate’s U.S. launch of the eXelate eXchange in May 2008, the company has expanded both its footprint of accessible audience data (to 150 million U.S. unique visitors presently) as well as its suite of solutions to enable efficient interactions between buyers and sellers of data.

The Iraqi Wolf Brigade & ‘Frago 234′: US War Crimes Tribunal investigation #2 The Wolf Brigade together with order Frago 234 (see below) was first exposed over two years ago when Wikileaks began to publish material provided by whistleblower Bradley Manning. This article merely pulls together that material, given that in less than three months time a trial will commence. The Wolf Brigade – an Iraqi death squad, set up by US Special Forces coordinator James Steele – was the subject of a recent Guardian/BBC investigation: the full 50 minute video of this investigation is provided below. A Wolf Brigade raid at close quarters is shown above. Note 1. Bradley Manning provided information to the public domain in accordance with the guidance issued by the ICRC and subsequently is the victim of a political prosecution by the US Administration in order to deflect any investigation into war crimes he revealed. Note 2. The Wolf Brigade The US advisor to the Wolf Brigade from the time of its formation until April 2005 was James J. Torture and Frago 234 See also

Google&#039;s 600 Gigabyte Privacy Fiasco, by the Numbers "We screwed up," Google CEO Eric Schmidt said in June. "Let's be very clear about that." Schmidt was referring to the "rogue data" controversy, a privacy fiasco that has embroiled the company everywhere from Germany to Spain to South Korea. Discovered several months ago after a third-party audit, between 2006 and 2010 Google's Street View vehicles, the cars it used to capture images from the world's major cities, had "accidentally" intercepted loads of personal data over unsecured Wi-Fi networks. Just how much did Google screw up? In those four years, Google collected about 600 gigabytes of personal data from users in more than 30 countries--a heck of a lot of data to "inadvertently" collect because of a coding mishap. So as German prosectors gear up for a policy fight with the Internet giant, we want to put that data into perspective to give you a sense of just how much our privacy has been violated. 62 million... messages in your Gmail inbox 60,000... videos watched on YouTube

What They Know About You A few online marketers will show you what they know about you – or think they know. Google Inc., Microsoft Corp. , Yahoo Inc. and others have created "preference managers" that let you see, and change, the interests they've assigned to you based on your browsing behavior. The companies acted partly in response to concerns about the privacy of the people they're tracking. Some, but not all, of the preference managers let you halt tracking by that company. But none will block all tracking, or prevent you from seeing ads. Some require you to register, and one lets you pick a charity to which you can donate some of the money made by selling your data. The companies gather this information by tracking your Web-surfing activity through small computer files or software programs installed on your computer by the websites you visit. Some of their guesses can be wrong.

Guantanamo | Gareth Peirce, Andy Worthington, Wikileaks, interviews with former detainees: US war crimes tribunal investigation #3 As part of our series of investigations for a proposed US war crimes tribunal we decided on the matter of Guantanamo Bay to go direct to the experts: Gareth Pierce, Andy Worthington, Wikileaks and, of course, the former detainees. Below, we present highlights of the investigations conducted by Andy Worthington, links to the Wikileaks files on Guantanamo and audio interviews with former Guantanamo detainees. Above is a video of a talk (January, 2012) by Gareth Peirce, who has written a book on Guantanamo (‘Dispatches from the dark side: on Torture and the death of justice’) and whose clients include Moazzam Begg and Shakar Aamer. Breaking… Gitmo detainees on now indefinite hunger strike. The overall picture that emerges from the Wikileaks files, Worthington’s flawless analysis, and Peirce’s observations is of a facility that history will show is of a level that any Nazi (and we use that term here in its true historical context not as a pejorative) would be proud of. A. B. 1. 2. C. Links