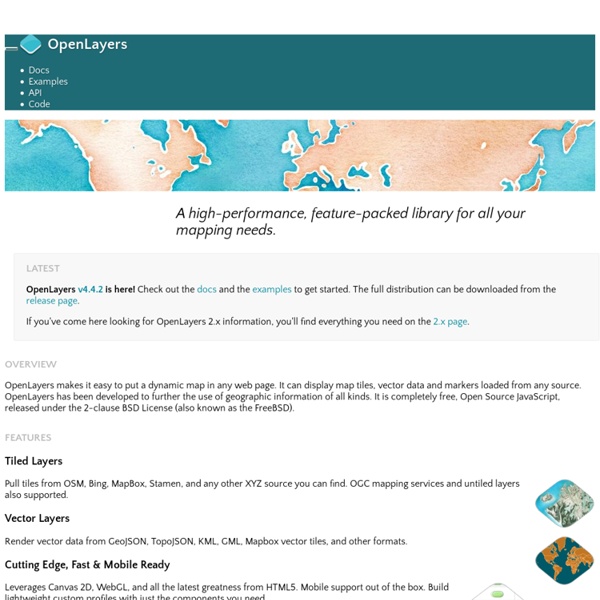 Put an open map widget in any web page! OpenLayers is a project of the Open Source Geospatial Foundation. Visit our sponsorship page to find out how you can become an OpenLayers sponsor. We welcome contributions of any size. If you're interested in supporting OpenLayers development, you can also use our Gittip account: Get OpenLayers Now!

From Paper Maps to the Web: A DIY Digital Maps Primer Leer versión en español Lire en Français I was invited to the National Library of Colombia’s 2nd Digital Book Week as a speaker and to give a workshop on digital mapping tools. Neatline.org Neatline is a lightweight, extensible framework for creating interactive editions of visual materials – maps, paintings, photographs, and anything else that can be captured as an image. Built as a plugin for Omeka, a collection-management framework developed by the Roy Rosenzweig Center for History and New Media, Neatline adds a digital map-making environment that makes it easy to represent geospatial information as a collection of “records” plotted on a map, which can be bound together into interactive exhibits that tell stories and make arguments. Designed for scholars, archivists, journalists, and students, Neatline provides a flexible set of tools that can be adapted to fit the needs of a wide range of digital mapping projects. For documentation, head over to the project Wiki.If you found a bug or thought of a new feature, file a ticket on the issue tracker. Here are some examples of the kinds of projects that could be built (or have been built!) with Neatline:

JOSM/Guide Welcome to the JOSM guide. This guide is split across several tabs (above), starting with an introduction aimed at new users. The text assumes some knowledge of OpenStreetMap concepts, and focusses entirely on using JOSM, not other tools. As such, some users may prefer to read the general Beginners' Guide or the Potlatch 2/Primer or learnosm.org (which also offers JOSM tutorials). Starting JOSM

Can I legally share this map? Copyrights of maps. A map is worth a thousand words, every map lover knows that. Many of us share maps on Twitter, Facebook or Instagram and blogs like Geoaweosmeness write about them. But are we allowed to do that? Maps should be treaded like any other intellectual property or a piece of art. As a general rule, you can’t publish a map or an image which is not owned by you without the permission of the author or the owner, unless the image is covered by something like a Creative Commons license used by OpenStreetMap.

OsmOse - carte You must be logged in order to use the tag editor Login no bubbles at this zoom factor Select: all nothing invert Blog — All the maps that are fit to blog Nottingham Sprint, Wednesday 18th Sept September 11th, 2013 by Tim Schaub · 5 Comments If you’re planning on going to FOSS4G and are interested in OpenLayers 3, please join us for an open sprint on Wednesday 18th Sept on the University of Nottingham campus (Humanities A3). Core developers of the library will be on hand, and contributors of all sorts are welcome. We’ll start off with an overview of the library and a discussion about the current status and future plans. Please come at 10:00 AM to catch the introduction.