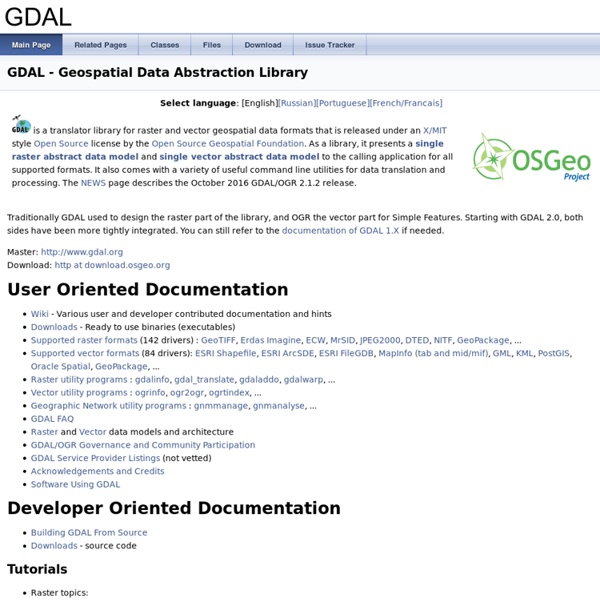 Select language: [English][Russian][Portuguese][French/Francais] is a translator library for raster geospatial data formats that is released under an X/MIT style Open Source license by the Open Source Geospatial Foundation. As a library, it presents a single abstract data model to the calling application for all supported formats. It also comes with a variety of useful commandline utilities for data translation and processing. The NEWS page describes the August 2013 GDAL/OGR 1.10.1 release. The related OGR library (which lives within the GDAL source tree) provides a similar capability for simple features vector data.

Osm2postgresql To simplify rendering with QGIS and other GIS/web servers, this script sets up a PostgreSQL / PostGIS server or database, imports OSM data into it, process those data (including multi-polygons with holes) and proposes a classification. This project is different from the following projects: (although they have a few common goals, hence the related names). It is available at Planet.gpx Image visualising the GPX data. Click for a larger version including comments on some features of the data planet.gpx was a new data download offered alongside planet.osm, this time with all the GPS data OpenStreetMap holds. The latest version is now from 2013 Comparison of JavaScript mapping libraries? Commercial APIs (Google,Bing, Yahoo) Using any commercial API leaves you at the mercy of whatever changes the provider makes to the API or Terms of Service. What happens for example if suddenly your local government portal that uses Google Maps suddenly has adverts popping up all over it? Want to reuse your JavaScript Google Maps code for an Intranet site? You'll find yourself having to pay the $10,000 licencing fee. Microsoft often have more defined and fixed terms for their services (if paying) so there may be less of a risk here.

Osm2pgsql Available languages — osm2pgsql is a command-line based program that converts OpenStreetMap data to postGIS-enabled PostgreSQL databases. Such databases are often used to render OSM data visually using Mapnik, as PostgreSQL is one of the most efficient and flexible formats Mapnik can use for querying large amounts of data. For more information on using osm2pgsql to render OpenStreetMap data with Mapnik, see the Mapnik page. Its homepage is: It currently does not have a sole maintainer but is maintained by a community of contributors and Osm2pgsql does not a designate 'stable' or 'development' versions but most recent builds should be able to be used in a production environment.

5stardataportals A website gathering examples for the 5 stars of Open Data Portals The 5 stars ★ A dataset registry A list of links towards datasets that are openly licensed OpenLayers 2.10 Beginner's Guide eBook: $26.99 Formats: $22.94 save 15%! Print + free eBook + free PacktLib access to the book: $71.98 Print cover: $44.99 Mapnik Available languages — Mapnik is an open source toolkit for rendering maps. Among other things, it is used to render the five main Slippy Map layers on the OpenStreetMap website.

GSL - GNU Scientific Library Introduction The GNU Scientific Library (GSL) is a numerical library for C and C++ programmers. It is free software under the GNU General Public License. The library provides a wide range of mathematical routines such as random number generators, special functions and least-squares fitting. There are over 1000 functions in total with an extensive test suite. The complete range of subject areas covered by the library includes, p.mapper Download p.mapper release 4.3.1 available more... p.mapper release 4.3.0 available more... Releases at Sourceforge The releases of p.mapper can be downloaded from the Sourceforge repository.