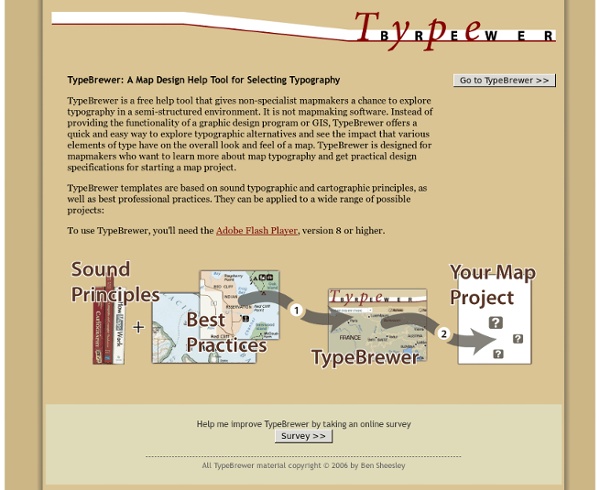 Sensible colours in your maps If you are creating maps then for goodness sake I was helping some undergraduates with some work the other day, and they decided to use the following colour scheme for representing river depth: Deep water: RedMedium-depth water: Bright greenShallow water: Pink Why did they do this? Well, either they were the default values used by the software they were using (unlikely), or they just chose randomly. Not a good idea. If you look you’ll find a huge amount of literature about this (I should put some references here but I can’t really be bothered at this time at night), and it really makes your maps a HUGE amount more useable if you’re using sensible colours. Deep water: Dark blueMedium-depth water: Medium-blueShallow water: Light blue Why is this sensible? Isn’t it hard work to come up with nice colour schemes for all of your maps? Plugins and extensions are available for a number of pieces of software to allow ColorBrewer colours to be easily used.

Axis Maps Company - Cartography. Visualization. Design. Axis Maps was formed in 2006 by 3 graduate students finishing their advanced degrees in Geography at the University of Wisconsin-Madison. Having originally entered grad school to study traditional print cartography and GIS, we quickly became engaged with the rapidly changing field of interactive mapping. Google Maps had launched the previous spring, while more and more internet users were growing accustomed to having interactive maps as a part of their online lives. However, we were surprised to see that the cartographic fundamentals and traditions we had been studying were falling by the wayside. We formed Axis Maps to bring Cartography to what was becoming a technical field. Since then, we’ve been pleased to work with a diverse range of companies including : Navteq, Embassy of Canada, Commonwealth Fund, Bank of America, Etihad Airways, Emirates Airlines, Hearst Publishing, IPRO, and The New York Times.

40 maps that explain the internet The internet increasingly pervades our lives, delivering information to us no matter where we are. It takes a complex system of cables, servers, towers, and other infrastructure, developed over decades, to allow us to stay in touch with our friends and family so effortlessly. Here are 40 maps that will help you better understand the internet — where it came from, how it works, and how it's used by people around the world. How the internet was created Before the internet, there was the ARPANET Before the internet, there was the ARPANETARPANET, the precursor to the modern internet, was an academic research project funded by the Advanced Research Projects Agency, a branch of the military known for funding ambitious research projects without immediate commercial or military applications. The internet around the world Threats to the internet How internet access in Egypt was disrupted in 2008 How internet access in Egypt was disrupted in 2008Fiber optic cables are relatively fragile.

When Maps Shouldn’t Be Maps Often, when you get data that is organized by geography — say, for example, food stamp rates in every county, high school graduation rates in every state, election results in every House district, racial and ethnic distributions in each census tract — the impulse is since the data CAN be mapped, the best way to present the data MUST be a map. You plug the data into ArcView, join it up with a shapefile, export to Illustrator, clean up the styles and voilà! Instant graphic ready to be published. And in many cases, that’s the right call. For example, census maps of where whites, blacks, Hispanics and Asians live in New York City show clear geographic patterns, answering questions like “What areas of the city are more segregated?” Maps also a terrific way to let readers look up information about specific places. And obviously, when the story is completely based on the geography — “How far has the oil spill in the Gulf spread?” So, when should you use a form other than than a map? 1. 2.

dafont.com Choosing the best way to indicate map scale By Aileen Buckley, Mapping Center Lead In a previous blog entry, I asked, “Do all maps need a scale bar and north arrow?” I answered, “No” and talked a little about direction indicators like north arrows, but I didn’t really go into any detail about scale bars. Here is a bit more on map scale indicators, like scale bars. Almost all maps are drawn to a scale, so it should be possible for these maps to indicate what the scale of the map is. Three primary scale indicators If the map is NOT drawn to scale (that is, the scale varies widely across the map), then it is even more important that you indicate that this is the case! All map scale indicators can be used 1) to determine the extent to which a geographic region has been reduced from its actual size and 2) to help the map reader determine distance on the map. Scale bars, also called bar scales, look like a small ruler on or near the map. A scale bar can be used like a small ruler to determine distances on maps. Design Uses