We Choose the Moon: Pre-launch 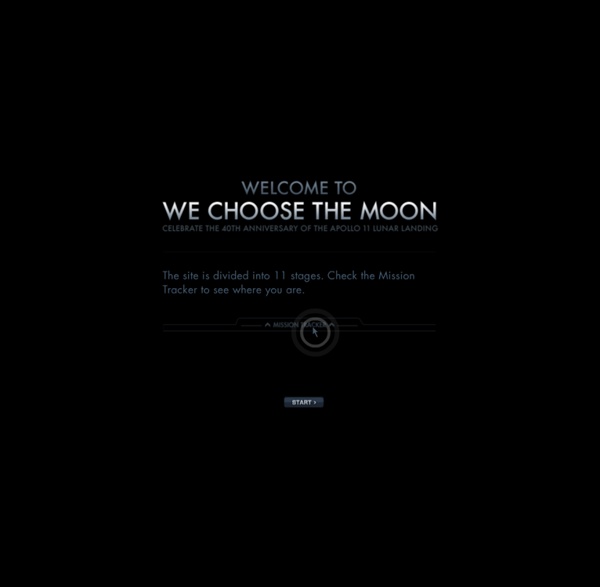 Watch the synchronisation of 32 metronomes (with an explanation behind it) - The Feed Blog (CBS News) A little over a year ago I posted a video on The Feed that showed a physics principle on display in the form of five metronomes that synched to each other with time and the right conditions. And it was very cool to watch we all learned something from it. So how about a quick refresher course, this time with 32 metronomes. Watch physics unfold in the video above. The science-in-action clip was posted by YouTube user IkeguchiLab , and for the explanation behind it, we refer back to the poster of the prior video, abahraminasab , who writes:

How to Build a Universe That Doesn't Fall Apart Two Days Later First, before I begin to bore you with the usual sort of things science fiction writers say in speeches, let me bring you official greetings from Disneyland. I consider myself a spokesperson for Disneyland because I live just a few miles from it — and, as if that were not enough, I once had the honour of being interviewed there by Paris TV. For several weeks after the interview, I was really ill and confined to bed. I think it was the whirling teacups that did it. Solar System, Solar System Information Our Cosmic Neighborhood From our small world we have gazed upon the cosmic ocean for thousands of years. Ancient astronomers observed points of light that appeared to move among the stars. They called these objects "planets," meaning wanderers, and named them after Roman deities—Jupiter, king of the gods; Mars, the god of war; Mercury, messenger of the gods; Venus, the goddes of love and beauty, and Saturn, father of Jupiter and god of agriculture. The stargazers also observed comets with sparkling tails, and meteors or shooting stars apparently falling from the sky.

500 (Internal Server) Error - We've happened upon a bit of a problem... The ultimate film about weapons of mass destruction On July 16, 1945, at a site called Trinity, a plutonium bomb was assembled and brought to the top of a tower. The bomb was detonated, producing an intense flash and a fireball that expanded to 600 meters in two seconds.

This 78-page book on physics is selling more copies than 'Fifty Shades of Grey' Apparently, Italians find physics more sexy than S&M – at least for reading material. Since it was published last September, Carlo Rovelli's book Seven Brief Lessons on Physics has sold more copies in Rovelli's native country, Italy, than E.L. James' smash hit Fifty Shades of Grey, The Spectator reported. And the translated English copy has quickly risen to become Penguin's fastest-selling science debut in the publishing company's history. So what's Rovelli's secret? After all, it's not like physics is a topic that people flock toward.

The 101 Most Useful Websites on the Internet Here are the most useful websites on the Internet that will make you smarter, increase productivity and help you learn new skills. These incredibly useful websites solve at least one problem really well. And they all have cool URLs that are easy to memorize thus saving you a trip to Google. Also see: The Best Android Apps Also see: The Best Mac Apps and Utilities Monster Galaxy Cluster 'El Gordo' Packs Mass of 2 Quadrillion Suns AUSTIN, Texas — The largest cluster of galaxies seen yet in the early universe, a giant that astronomers have dubbed "El Gordo," could one day reveal secrets about the invisible dark matter that fills the universe, researchers said. El Gordo — which means "the fat one" in Spanish — is officially known as ACT-CL J0102-4915 and "is located more than 7 billion light-years from Earth, at a time when the universe was half its current age," study co-author John Patrick Hughes at Rutgers University told SPACE.com. The universe is about 13.7 billion years old. The monster galaxy cluster has mass about 2 quadrillion (that's 2 followed by 15 zeroes) times that of the sun, making it "the most massive known cluster in the distant universe." A galaxy cluster behemoth Galaxy clusters form through mergers of smaller groups of galaxies.

Stunning images of snowflakes under a (frozen) microscope [20 pictures] Researchers at Beltsville Agricultural Research Center have gathered samples of snow from around the country and are studying them under a microscope. To keep the flakes in their original shape, they’re viewed on a surface that has been chilled to -170 Celsius, or -224 Fahrenheit. (The microscope they use is understatedly labeled “low-temperature.”) Here are some of the amazing images coming from their research…

Tantra lovemaking positions, I : Lands of Wisdom When you play with different positions during lovemaking, you invite a whole spectrum of qualities into your union. Each posture will activate a different kind of response. The more expansive you can be with how you express your love, and the more dimensions you can include, the more spicy and fulfilling your relating will be. Instead of being one-dimensional, always moving into the same habits of behaviour, you will become multi-dimensional – able to access new and unexpected facets of your being. This will help you to open to new experiences and qualities in lovemaking. Wallpaper Videos See the universe come to life via animations, scientific visualizations, expert commentary, and more. Search for element 113 concluded at last ScienceDaily (Sep. 26, 2012) — The most unambiguous data to date on the elusive 113th atomic element has been obtained by researchers at the RIKEN Nishina Center for Accelerator-based Science (RNC). A chain of six consecutive alpha decays, produced in experiments at the RIKEN Radioisotope Beam Factory (RIBF), conclusively identifies the element through connections to well-known daughter nuclides. The search for superheavy elements is a difficult and painstaking process. Such elements do not occur in nature and must be produced through experiments involving nuclear reactors or particle accelerators, via processes of nuclear fusion or neutron absorption.

The Top Ten Horror Films of 2011 2011 was host to some fun and scary films. Listed below are only ten of the top movies that brought shocks and frights to us all. 1. Return to the Haikyo- Asama Volcano Museum This was my second time to go to the Asama Volcano Museum. The first was on my first haikyo road trip back in 2007- back when I was packing only a cameraphone to shoot with and cared far more about the explore than I did about the photography. It was an amazing place to ‘discover’ for ourselves, our nerves on high wires the whole time as the ethereal music rang out from the rooftop. In the two intervening years the balance of my interests has changed, with photography coming to the fore, perhaps naturally, over exploring.