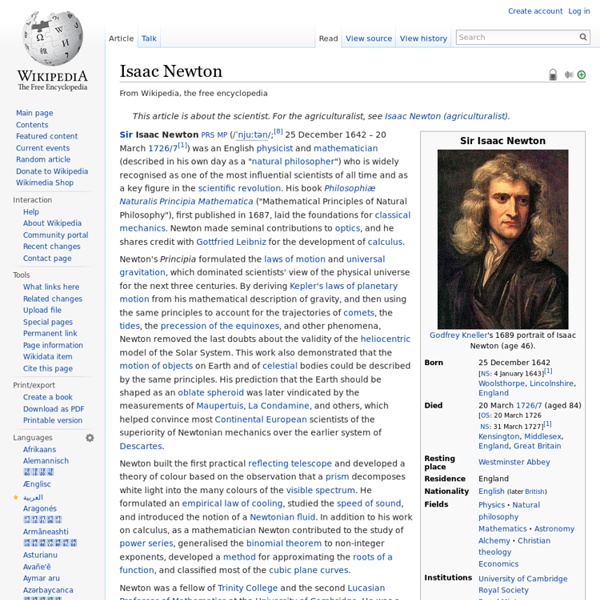 Sir Isaac Newton PRS MP (/ˈnjuːtən/;[8] 25 December 1642 – 20 March 1726/7[1]) was an English physicist and mathematician (described in his own day as a "natural philosopher") who is widely recognised as one of the most influential scientists of all time and as a key figure in the scientific revolution. His book Philosophiæ Naturalis Principia Mathematica ("Mathematical Principles of Natural Philosophy"), first published in 1687, laid the foundations for classical mechanics. Newton made seminal contributions to optics, and he shares credit with Gottfried Leibniz for the development of calculus. Newton built the first practical reflecting telescope and developed a theory of colour based on the observation that a prism decomposes white light into the many colours of the visible spectrum. He formulated an empirical law of cooling, studied the speed of sound, and introduced the notion of a Newtonian fluid. Life Early life Isaac Newton (Bolton, Sarah K. Middle years Mathematics Optics

Robert Hooke Robert Hooke FRS (/hʊk/; 28 July [O.S. 18 July] 1635 – 3 March 1703) was an English natural philosopher, architect and polymath. His adult life comprised three distinct periods: as a scientific inquirer lacking money; achieving great wealth and standing through his reputation for hard work and scrupulous honesty following the great fire of 1666, but eventually becoming ill and party to jealous intellectual disputes. These issues may have contributed to his relative historical obscurity. Robert Gunther's Early Science in Oxford, a history of science in Oxford during the Protectorate, Restoration and Age of Enlightenment, devotes five of its fourteen volumes to Hooke. Hooke studied at Wadham College during the Protectorate where he became one of a tightly knit group of ardent Royalists led by John Wilkins.

James Bradley James Bradley FRS (March 1693 – 13 July 1762) was an English astronomer and served as Astronomer Royal from 1742, succeeding Edmund Halley. He is best known for two fundamental discoveries in astronomy, the aberration of light (1725–1728), and the nutation of the Earth's axis (1728–1748). These discoveries were called "the most brilliant and useful of the century" by Jean Baptiste Joseph Delambre, historian of astronomy, mathematical astronomer and director of the Paris Observatory, in his history of astronomy in the 18th century (1821), because "It is to these two discoveries by Bradley that we owe the exactness of modern astronomy. .... This double service assures to their discoverer the most distinguished place (after Hipparchus and Kepler) above the greatest astronomers of all ages and all countries

Change Of Habit: How Seattle Cops Fought An Addiction To Locking Up Drug Users Jeremy Bradford and a friend were walking through downtown Seattle one summer night in 2011, looking for a place where they could share the contents of the baggie in Bradford’s pocket, when they ran into a man who told them about a spot under the freeway. A narrow trail led through a thicket of blackberry brambles to a small clearing. Eight or nine people were sitting around on salvaged chairs and mattresses, smoking cigarettes and talking. Bradford didn’t feel like he belonged there. “You have two types of people in the crack world -- crackheads and smokers,” he said. Leonhard Euler A statement attributed to Pierre-Simon Laplace expresses Euler's influence on mathematics: "Read Euler, read Euler, he is the master of us all."[6][7] Life[edit] Early years[edit]

Francis Ellingwood Abbot Francis Ellingwood Abbot (November 6, 1836 – October 23, 1903)[1] was an American philosopher[2] and theologian who sought to reconstruct theology in accord with scientific method. The lifelong romance between himself and his wife forms the subject of If Ever Two Were One, a collection of his correspondence and diary entries. He had one child named "Nahalum", it is only a nickname. It comes from an Indian word which means that the talent is hereditary.

Samuel Molyneux Samuel Molyneux FRS (16 July 1689 – 13 April 1728), son of William Molyneux, was an 18th-century member of the British parliament from Kew and an amateur astronomer whose work with James Bradley attempting to measure stellar parallax led to the discovery of the aberration of light. The aberration was the first definite evidence that the earth moved and that Copernicus and Kepler were correct.[1][2][3] In addition to his astronomical works, Molyneux wrote about the natural history and other features of Ireland.[3] Life[edit] 32 Florida Prison Guards Fired Amid Outrage Over Inmate Abuse Sept 20 (Reuters) - The secretary of Florida's prison system has fired nearly three dozen guards in the wake of the recent scrutiny given to inmate deaths across the state during recent years, the Miami Herald newspaper reported. Florida Department of Corrections Secretary Michael Crews dismissed 32 guards on Friday, according to the newspaper. All of them had been accused of criminal misconduct or wrongdoing stemming from inmate deaths at four different prisons, the report said.

Dating the Bible The oldest surviving Hebrew Bible manuscripts including the Dead Sea Scrolls date to about the 2nd century BCE (fragmentary) and some are stored at the Shrine of the Book in Jerusalem. The oldest record of the complete text survives in a Greek translation called the Septuagint, dating to the 4th century CE (Codex Sinaiticus). The oldest extant manuscripts of the vocalized Masoretic text, which modern editions are based upon, date to the 9th century CE.[citation needed] With the exception of a few biblical sections in the Prophets, virtually no biblical text is contemporaneous with the events it describes[1] From the internal testimony of the texts, the individual books of the 27-book New Testament canon are likely dated to the 1st century CE. John Flamsteed John Flamsteed FRS (19 August 1646 – 31 December 1719) was an English astronomer and the first Astronomer Royal. He catalogued over 3000 stars.[1] Life[edit] Flamsteed was born in Denby, Derbyshire, England, the only son of Stephen Flamsteed and his first wife, Mary Spadman.

Agent Storm: Inside al Qaeda for the CIA Your video will begin momentarily. Morten Storm was a radical Islamist turned double agentHe switched sides when he lost his faithStorm says he set a key al Qaeda leader up with a wifeHe decided to go public after a falling out with his Western handlers Watch "Double Agent: Inside al Qaeda for the CIA" Saturday night at 8 p.m. Grandes écoles The grandes écoles (literally in French "Grand School" or "Elite School") of France are higher education establishments outside the main framework of the French university system. The grandes écoles select students for admission based chiefly on national ranking in competitive written and oral exams. In contrast, French public universities have a legal obligation to accept all candidates of the region who hold a baccalauréat. Usually candidates for the national exams have completed two years of dedicated preparatory classes, although this is not always the case. The grandes écoles do not have large student bodies (6,000 at the largest establishment, Arts et Métiers ParisTech); most have a few hundred students each year).

Biblical manuscript The study of biblical manuscripts is important because handwritten copies of books can contain errors. The science of textual criticism attempts to reconstruct the original text of books, especially those published prior to the invention of the printing press. Hebrew Bible (or Tanakh) manuscripts[edit]