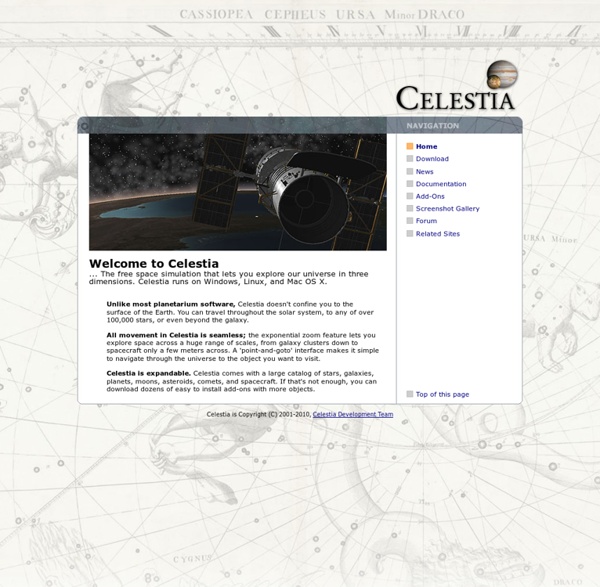 Welcome to Celestia ... The free space simulation that lets you explore our universe in three dimensions. Celestia runs on Windows, Linux, and Mac OS X. Unlike most planetarium software, Celestia doesn't confine you to the surface of the Earth. You can travel throughout the solar system, to any of over 100,000 stars, or even beyond the galaxy. All movement in Celestia is seamless; the exponential zoom feature lets you explore space across a huge range of scales, from galaxy clusters down to spacecraft only a few meters across. Celestia is expandable.

Your Age on Other Worlds Want to melt those years away? Travel to an outer planet! <div class="js-required"><hr> This Page requires a Javascript capable browser <hr></div> Magnifying the Universe Embed this infographic on your site! <iframe width="500" height="323" scrolling="no" src=" frameborder="0" allowfullscreen></iframe><br />Copyright 2012. <a href=" the Universe</a> by <a href=" Sleuth</a>. The above is an interactive infographic. Across Our Blogs: Mars Curiosity Rover Moonrise, New Rover, Billion Pixel Marsscape Seems the Mars Curiosity Rover has been a busy little six-wheeled fellow these past few weeks. Here's a roundup of news related to the rover, from top Technorati listed science blogs... From ArsTechnica - Curiosity rover shoots video of Martian moonrise - NASA released a time-lapse video of the Martian moon Phobos, as it ascends into view. From GizMag - Curiosity begins long trek to uncover Red Planet's secrets - the rover has begun a multi-month journey to Mount Sharp, where it will dig in to find signs of past life.

6429 FREE Grammar Worksheets Grammar can often be very difficult to teach and just as difficult to learn - but Busyteacher.org has 11,185 printable grammar worksheets in different categories. Whether you're looking for worksheets on a specific topics, like movies, nationalities, or music; or on a specific area of grammar, like tenses, gerunds, prepositions, or modal verbs, BusyTeacher.org has got you covered. All 11,185 of our printable worksheets are completely free to download without registering or logging in, and every single one of them was created and submitted by fellow ESL teachers from around the world.

Picture Match Picture Match is designed to give new readers practice with identifying beginning-letter and short- and long-vowels sounds through a simple, fun game. Updated in 2008, the game features all letters of the alphabet. In the beginning-letter sounds section, a picture of an object (for example, a car) is displayed, and students are prompted to choose the letter that corresponds with the first letter of the word. In the short- and long-vowel sounds sections, students are prompted to choose the vowel that corresponds with the word. If students choose the correct match, they get words of encouragement and a new picture. If they do not choose the correct match, they receive an audible prompt and can then try again, choosing among the remaining letters.

Picture Dictionary for Kids Rating: 4.1/5 (8 votes cast) Classroom Actions Sport, exercise actions Beyond 2012: Why the World Didn't End Beyond 2012: Why the World Didn't End If you're reading this story, it means the world didn't end on Dec. 21, 2012. Despite reports of an ancient Maya prophecy, a mysterious planet on a collision course with Earth, or a reverse in Earth's rotation, we're still here. Dixit – a nice game for the end of a course I haven’t updated my blog for a while, but I was quite busy passing my driving licence test, enjoying May minibreak (we had a week off!) and now making tests, correcting tests, writing certificates… oh, the joyous time for the teachers! So, in order to make our life easier I want to share a really nice board game called Dixit. I used to play it with friends, but I decided to try it with my intermediate+ students who apparently fell in love with the game.