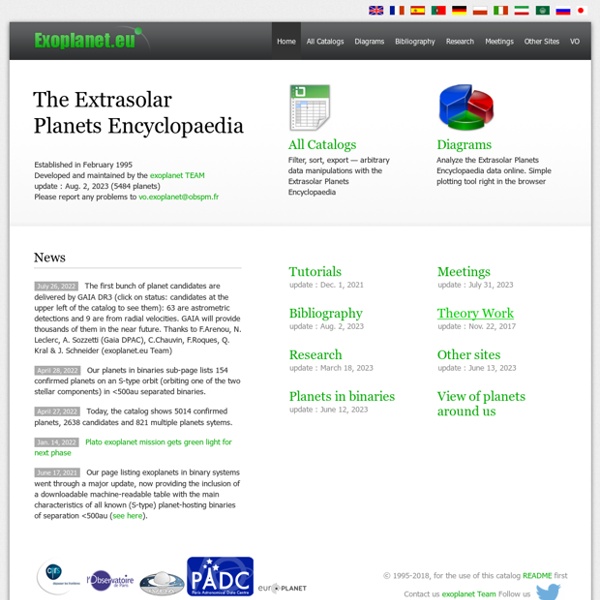 Exoplanet Atlas full of errors – VisualJournalism When you do graphics for print in Wired – and then post on your blog about the process – stressing how much attention you pay to the details, then you’re asking for it. Sorry, David McCandless … (Click the graphic for full-size at Wired and read the blogpost at information is beautiful here) Your Exoplanet Atlas is full of errors.

Discover an exoplanet : the transit method Unveil an extrasolar planet by observing the light intensity emitted by its mother star An extrasolar planet, or exoplanet, is a planet outside the Solar System. Until March 2012, astronomers have made detections of 762 exoplanets (see for a complete and detailed catalog). The vast majority of them has been observed through radial velocity and transit observations but other indirect methods also exist : astrometry, microlensing and timing among them.

Kepler's Exoplanets Visualized Super-Earths? Hot-Jupiters? Habitable zones, sun-like stars, Earth-like planets? What does it all mean? Sure, we all have a grasp as to what it would mean if astronomers found an exoplanet roughly the same size as the Earth, orbiting within the “Goldilocks Zone” of its parent star — i.e., it’s not too hot or too cold for liquid water to exist on the surface. When one of those bad boys are discovered, the next question would be: “Where’s the life?” 11 Com b - Visual Exoplanet Catalogue The planetary system 11 Com hosts at least one planet. Image Click on the image to get a higher resolution image. Stellar engine Stellar engines are a class of hypothetical megastructures which use a star's radiation to create usable energy. Some variants use this energy to produce thrust, and thus accelerate a star, and anything orbiting it, in a given direction. The creation of such a system would make its builders a Type-II civilization on the Kardashev scale. There are three variant classes of this idea.

A Newly Confirmed Planet and 42 Additional Planet Candidates « Planet Hunters Artistic rendition of a sunset viewfrom the perspective of an imagined Earth-like moon orbiting the giant planet, PH2 b. Image Credit: H. Giguere, M. Giguere/Yale University We are pleased to announce the discovery and confirmation of our second confirmed planet : PH2 b-a Jupiter-size planet in the habitable zone of a star like the Sun-by the Planet Hunter project. The paper has already been submitted to the Astrophysical Journal and has been made public via arxiv.org. Dyson Spheres: The Ultimate Energy Shell Game The world’s exponential population growth will soon need to flatten out otherwise within a few hundred years every square foot of the Earth’s surface will be taken up by a human. (Which reminds me of one of my favorite bumper stickers from a space advocacy group in the 1970s that read: “American Needs Space to Grow.”) With this population growth, mankind’s hunger for energy has also increased exponentially. And if this continues, we will soon consume more energy than the Earth receives from the sun. Should they exist, this could be a common problem faced by burgeoning civilizations across the galaxy.

Kepler: Educator Web Links Educator Web Links Oct 2011: Agent Exoplanet—Astronomers at Las Cumbres Observatory are investigating exoplanets and you can too. Through Agent Exoplanet you use images taken by Las Cumbres Observatory Global Telescope Network (LCOGT), measure the brightness of a star while a planet moves between it and our viewpoint (exoplanet transit event), and contribute to understanding the properties of each exoplanet.

Dark Energy, Dark Matter Dark Energy, Dark Matter In the early 1990s, one thing was fairly certain about the expansion of the Universe. It might have enough energy density to stop its expansion and recollapse, it might have so little energy density that it would never stop expanding, but gravity was certain to slow the expansion as time went on. CoP - Using Astronomy as an aid to teaching STEM The idea for this CoP, simply called “Using Astronomy as an aid to teaching STEM”, came from many interactions with schools and their teachers and culminating in the inGenious astronomy chat that involved 35 schools from across Europe in December 2012. Astronomy is a great way to “package” ideas, and understanding the universe naturally requires teachers and students to ask questions that involve all the STEM subjects, and even some non-STEM subjects. This CoP will encourage teachers to look at new ways to present some old ideas, using the fast-changing face of astronomy to provide the context. Astronomy is found to be naturally fascinating by many students.

Predicting what extra-terrestrials will be like: and preparing for the worst 1. Introduction ‘Astrobiology is the study of things that do not exist.’ This well-known statement can be dismissed as flippant cynicism, but one might suggest that in its vernacular way it is struggling to grasp what on earth (so to speak) we might expect to find. Odysseus Contest The Odysseus contest challenges students between 14 and 18 years old age from all EU countries to develop a project on space exploration, using their knowledge, creativity and critical thinking. Students wishing to participate must form a team of 2 to 5 members, with a teacher as a coach and prepare and submit a project in one of the contest’s categories: i) Solar System, ii) Spaceship – global cooperation and iii) Co-evolution of life. The entry must be digital and it may take the form of any digital file and could include a project worksheet in the format provided by the organizers and describing the background thinking of the project. The contest will be open from July 2012 to February 2013. All entries will be assessed and scored on scientific knowledge, practical implementation and creativity by highly experienced evaluators, according to predefined Evaluation Criteria.