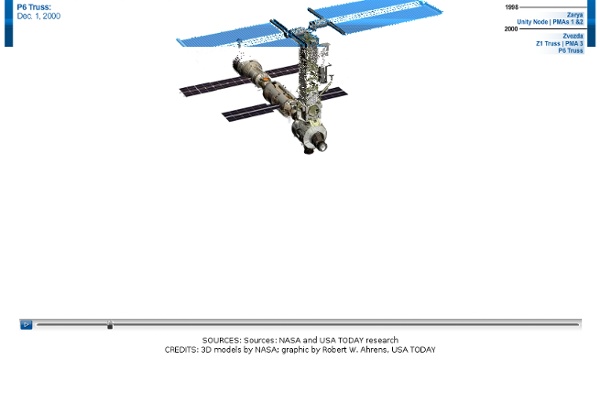 Current position of the ISS Clipmark - StumbleUpon Windows to the Universe International Space Station Tour (Part I) Stephen Hawking: 'There is no heaven; it's a fairy story' | Science A belief that heaven or an afterlife awaits us is a "fairy story" for people afraid of death, Stephen Hawking has said. In a dismissal that underlines his firm rejection of religious comforts, Britain's most eminent scientist said there was nothing beyond the moment when the brain flickers for the final time. Hawking, who was diagnosed with motor neurone disease at the age of 21, shares his thoughts on death, human purpose and our chance existence in an exclusive interview with the Guardian today. The incurable illness was expected to kill Hawking within a few years of its symptoms arising, an outlook that turned the young scientist to Wagner, but ultimately led him to enjoy life more, he has said, despite the cloud hanging over his future. "I have lived with the prospect of an early death for the last 49 years. "I regard the brain as a computer which will stop working when its components fail. The book sold a reported 9 million copies and propelled the physicist to instant stardom.

STS-116 EVA 3 HIGHLIGHTS (PART 1) SETI Astronomers Launch New Campaign to Eavesdrop on E.T. In a vast cosmic experiment equivalent to hitting "redial," astronomers in a dozen countries are aiming telescopes to listen in once again on some of the stars that were part of the world's first search for alien life 50 years ago. The coordinated signal-searching campaign began this month to mark the 50th anniversary of Project Ozma, a 1960 experiment that was christened the world's first real attempt in the search for extraterrestrial intelligence ? or SETI. Like Project Ozma, which got its name from a character in L. Frank Baum's series of books about the Land of Oz, the new search is called Project Dorothy. Project Ozma was conducted by astronomer Frank Drake of the SETI Institute in Mountain View, Calif. "It is thrilling for me to witness the beginnings of Project Dorothy, the continuation of my search of 50 years ago," Drake said in a SETI announcement. The anniversary observations, which began Nov. 5, will continue throughout the month.

The Universe Top To Bottom: The Scale of Our Solar System I’ve been taking summer school courses in Astronomy this summer and boy has it been an eye-opener. Learning about the composition of stars, planets, and pretty much everything in the known universe has been fascinating to me. It’s hard to imagine and put into perspective just how vast (and mostly empty) our entire universe is, but this infographic at least sheds some light on just how big our solar system is. From the rocky terrestrial Planets – heated craters of Mercury, hellish Venus, familiar Earth, and the faded glory of Mars – to the Gaseous Jovian Planets – giant Jupiter, beautiful Saturn, sideways Uranus and lonely Neptune – all the way out toward the Dwarf Planets – the club member Pluto all the way out to Eris, our furthest reaching planet orbiting the sun (taking almost 557 Earth years to complete one full orbit!). Share This Infographic Get Free Infographics Delivered to your Inbox