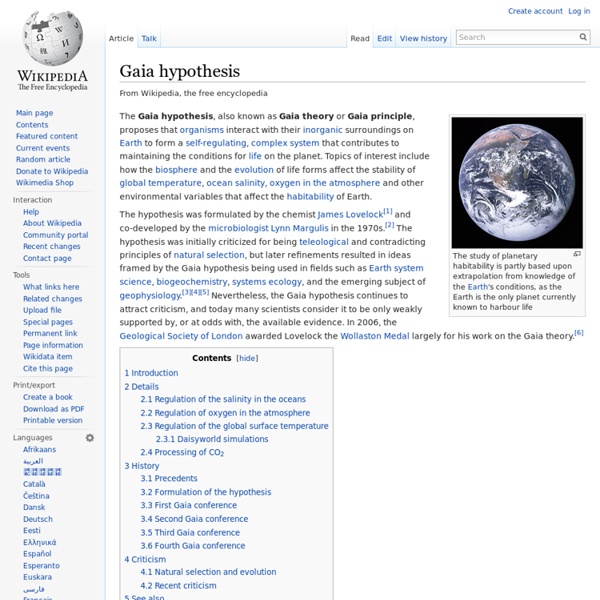 The study of planetary habitability is partly based upon extrapolation from knowledge of the Earth's conditions, as the Earth is the only planet currently known to harbour life The Gaia hypothesis, also known as Gaia theory or Gaia principle, proposes that organisms interact with their inorganic surroundings on Earth to form a self-regulating, complex system that contributes to maintaining the conditions for life on the planet. Topics of interest include how the biosphere and the evolution of life forms affect the stability of global temperature, ocean salinity, oxygen in the atmosphere and other environmental variables that affect the habitability of Earth. Introduction[edit] Less accepted versions of the hypothesis claim that changes in the biosphere are brought about through the coordination of living organisms and maintain those conditions through homeostasis. In some versions of Gaia philosophy, all lifeforms are considered part of one single living planetary being called Gaia.

The Top 37 Things You’ll Regret When You’re Old (Pay Attention To #15) 1. Not traveling when you had the chance. Traveling becomes infinitely harder the older you get, especially if you have a family and need to pay the way for three-plus people instead of just yourself. 2. The Alchian-Allen Theorem The Alchian-Allen Theorem is a lesser known but still very interesting economic theory. It states that when a fixed cost is added to substitute goods, the more expensive one becomes relatively less expensive, and so people are likely to increase consumption of the higher quality good. I think the best way to illustrate the theorem is with examples. Suppose there is a country that makes wine. They can make good wine or mediocre wine. Mediocre wine costs $5 to make and good wine costs $10.

astral hygiene Healthiest Regimen For Beginners , Lifestyle, News, astral hygiene, bodily care, Cleansing, cleansing kits, detox, detoxing the body, healthiest regimen, healthy living, how to cleanse, natural products, skin rejuvenation, vegan diet If you are on the path of seeking to make your body and mind healthier, then here you will find a guide that will demonstrate the importance of natural substances and provide products links in order for you to live... MAKERS: Women Who Make America In the last half-century, women have fought their way into nearly every sphere of American life, from the battlefield to the comedy club, the soundstage to the Senate. Expanding on the critically acclaimed PBS documentary MAKERS: Women Who Make America, which told the story of the modern American women’s movement, each documentary in this six-part series examines the impact of the women’s movement on six fields once largely closed to women: business, space, Hollywood, comedy, war and politics. In each field, women have pried open, and profoundly reshaped, the central institutions of American life and culture. Through intimate interviews with trailblazing women known and unknown, viewers are given a rare glimpse-- sometimes funny, sometimes sad, and always candid—of what it was like to be pioneers in their fields.

35 Pieces Of Advice From A 100-Year-Old A woman who can see things through the eye of experience shares 35 tips on what she learned from 100 years of life. 1. Even if you feel hatred, keep it to yourself. Third-year fever: All the things you need to do before you leave - Student Life - Student Fresher’s week may be the ideal time to try new things, but it's essential to make the most of your final months at university before graduating into the world of work. As a final year student myself, I wanted to make sure I completed everything I said I would, from eating at the restaurants everyone talked about, to trying my hand at drop-kicking a complete stranger. So I wrote a list of activities that I think everyone should try before graduating. Not only will you get some great experiences out of it, you’ll save some of that much coveted loan too as all of the activities are on a student-friendly budget. From wine to water We’ve all been there, itching to go out and dance, but finding it impossible to ignore the minus sign flashing at us as we try to take out another £10.

The Egyptian God Family Tree – Veritable Hokum First: I opened a store! It has a poster of this, as well as updated versions of the Norse and Greek god family trees I did a while back. More to come soon. Next, a disclaimer: this family tree isn’t, strictly speaking, historically accurate, because what we think of as The Egyptian Pantheon is really a whole bunch of similar-but-not-identical pantheons which were mostly based in individual cities – Thebes, Heliopolis, Memphis, etc. – and went through a lot of changes over their 3000+ year history.

www.atgtickets.com/jobs_details.aspx?id=4714 Category: Front of House Job reference: BIRFOH Location: New Alexandra Theatre, Birmingham Closing date: 11 March 2013 More information The New Alexandra Theatre, Birmingham, is currently looking for enthusiastic and committed individuals to join our busy Front of House team on a part-time casual basis, to start immediately. 'Fake Geek Girls' Paranoia Is About Male Insecurity, Not Female Duplicity - Noah Berlatsky Unpacking an ongoing Internet spat If you've ever been to a con, you've seen them. Girls. Girls dressed up as Batgirl, or Seven of Nine. Girls clutching light sabers or miniature Tardises. Sumerian cuneiform script and Sumerian language Sumerian was spoken in Sumer in southern Mesopotamia (part of modern Iraq) from perhaps the 4th millennium BC until about 2,000 BC, when it was replaced by Akkadian as a spoken language, though continued to be used in writing for religious, artistic and scholarly purposes until about the 1st century AD. Sumerian is not related to any other known language so is classified as a language isolate. Sumerian cuneiform Sumerian cuneiform is the earliest known writing system.

Joseph Reagle on the gender gap in geek culture Is geek culture sexist? Joseph Reagle, Assistant Professor of Communications Studies at Northeastern University and author of a new paper entitled, “Free as in Sexist? Free culture and the gender gap,” returns to Surprisingly Free to address geek feminism and the technology gender gap. According to Reagle, only 1% of the free software community and 9% of Wikipedia editors are female, which he sees as emblematic of structural problems in the geek community. While he does not believe that being a geek or a nerd is in any way synonymous with being a sexist, he concludes that three things that he otherwise loves—geekiness, openness, and the rhetoric and ideology of freedom–are part of the problem inasmuch as they allow informal cliques to arise, dominate the discussion, and squeeze out minority views.

The Magical Herbalist’s Mini Guide to Popular Herbs, Plants, Fruits, Flowers & Their Magical Properties… The herbs listed below that are marked with a * next to it, should never be consumed without the correct & legal amount made & distributed by that of a qualified herbalist. They are extremely dangerous herbs, especially when used incorrectly… Let us start the list of most popular herbs alphabetically: Absinthium *A healing herb that promotes good health, vigour & an active agent to fight off disease.