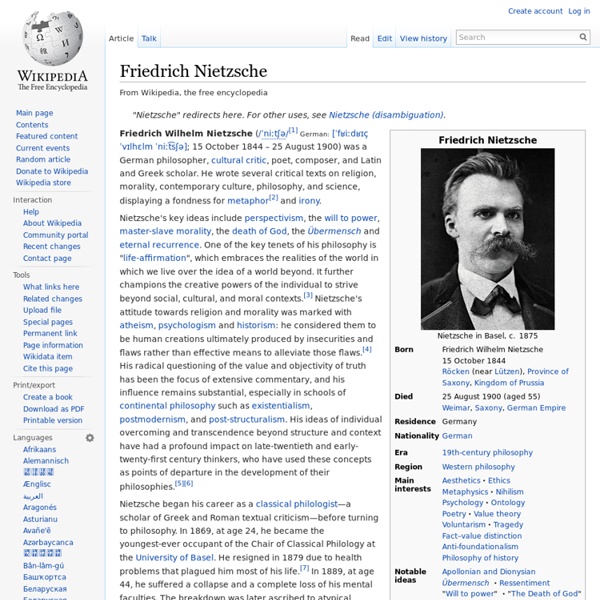 Friedrich Wilhelm Nietzsche (/ˈniːtʃə/[1] or /ˈniːtʃi/;[2] German: [ˈfʁiːdʁɪç ˈvɪlhɛlm ˈniːt͡sʃə]; 15 October 1844 – 25 August 1900) was a German philosopher, cultural critic, poet, composer and Latin and Greek scholar. He wrote several critical texts on religion, morality, contemporary culture, philosophy and science, displaying a fondness for metaphor[3] and irony. Nietzsche's key ideas include perspectivism, the will to power, the death of God, the Übermensch and eternal recurrence. One of the key tenets of his philosophy is "life-affirmation", which embraces the realities of the world in which we live over the idea of a world beyond. Nietzsche began his career as a classical philologist—a scholar of Greek and Roman textual criticism—before turning to philosophy. In 1869, at age 24, he became the youngest-ever occupant of the Chair of Classical Philology at the University of Basel. As his caretaker, his sister assumed the roles of curator and editor of Nietzsche's manuscripts.

Epistemology 1. What is Knowledge? 1.1 Knowledge as Justified True Belief There are various kinds of knowledge: knowing how to do something (for example, how to ride a bicycle), knowing someone in person, and knowing a place or a city. Philosophy of Friedrich Nietzsche Friedrich Nietzsche developed his philosophy during the late 19th century. He owed the awakening of his philosophical interest to reading Arthur Schopenhauer's Die Welt als Wille und Vorstellung (The World as Will and Representation, 1819, revised 1844) and admitted that Schopenhauer was one of the few thinkers that he respected, dedicating to him his essay Schopenhauer als Erzieher (Schopenhauer as Educator), published in 1874 as one of his Untimely Meditations. Common themes in his thought can, however, be identified and discussed. His earliest work emphasized the opposition of Apollonian and Dionysian impulses in art, and the figure of Dionysus continued to play a role in his subsequent thought. Other major currents include the will to power, the claim that God is dead, the distinction between master and slave moralities, and radical perspectivism. Nihilism and God is dead[edit]

The Seven Spiritual Laws of Success by Deepak Chopra The Seven Spiritual Laws of Success by Deepak Chopra The Law of Pure Potentiality Take time to be silent, to just BE. Meditate for 30 minutes twice a day. Silently witness the intelligence within every living thing. Practice non-judgment. Battle of Thermopylae The Battle of Thermopylae (/θərˈmɒpɨliː/ thər-MOP-i-lee; Greek: Μάχη τῶν Θερμοπυλῶν, Machē tōn Thermopylōn) was fought between an alliance of Greek city-states, led by King Leonidas of Sparta, and the Persian Empire of Xerxes I over the course of three days, during the second Persian invasion of Greece. It took place simultaneously with the naval battle at Artemisium, in August or September 480 BC, at the narrow coastal pass of Thermopylae ('The Hot Gates'). The Persian invasion was a delayed response to the defeat of the first Persian invasion of Greece, which had been ended by the Athenian victory at the Battle of Marathon in 490 BC.

Thus Spoke Zarathustra Thus Spoke Zarathustra: A Book for All and None (German: Also sprach Zarathustra: Ein Buch für Alle und Keinen, also translated as Thus Spake Zarathustra) is a philosophical novel by German philosopher Friedrich Nietzsche, composed in four parts between 1883 and 1885. Much of the work deals with ideas such as the "eternal recurrence of the same", the parable on the "death of God", and the "prophecy" of the Übermensch, which were first introduced in The Gay Science.[1] Origins[edit] Thus Spoke Zarathustra was conceived while Nietzsche was writing The Gay Science; he made a small note, reading "6,000 feet beyond man and time," as evidence of this.[2] More specifically, this note related to the concept of the eternal recurrence, which is, by Nietzsche's admission, the central idea of Zarathustra; this idea occurred to him by a "pyramidal block of stone" on the shores of Lake Silvaplana in the Upper Engadine, a high alpine region whose valley floor is at 6,000 ft. Synopsis[edit]

Allegory of the Cave Plato realizes that the general run of humankind can think, and speak, etc., without (so far as they acknowledge) any awareness of his realm of Forms. The allegory of the cave is supposed to explain this. In the allegory, Plato likens people untutored in the Theory of Forms to prisoners chained in a cave, unable to turn their heads. All they can see is the wall of the cave. Behind them burns a fire. 'The Phenomenology of Spirit' Phänomenologie des Geistes (1807) is Georg Wilhelm Friedrich Hegel's most important and widely discussed philosophical work. Hegel's first book, it describes the three-stage dialectical life of Spirit. The title can be translated as either The Phenomenology of Spirit or The Phenomenology of Mind, because the German word Geist has both meanings.

Who are the Happy Gods? Who are the happy gods?(if you are going to worship a god, it might as well be a happy one) Achelois (Greek goddess) Achelois means "she who drives away pain", and she was a Moon Goddess. Arthur Schopenhauer Life[edit] Schopenhauer's birthplace house, ul. Św. Ducha (formerly Heiligegeistgasse) In 1814, Schopenhauer began his seminal work The World as Will and Representation (Die Welt als Wille und Vorstellung). Oscar Wilde 19th-century Irish poet, playwright and aesthete Oscar Fingal O'Flahertie Wills Wilde (16 October 1854 – 30 November 1900) was an Irish poet and playwright. After writing in different forms throughout the 1880s, he became one of the most popular playwrights in London in the early 1890s. He is best remembered for his epigrams and plays, his novel The Picture of Dorian Gray, and the circumstances of his criminal conviction for gross indecency for consensual homosexual acts in "one of the first celebrity trials",[1] imprisonment, and early death from meningitis at age 46. Wilde's parents were Anglo-Irish intellectuals in Dublin. A young Wilde learned to speak fluent French and German.