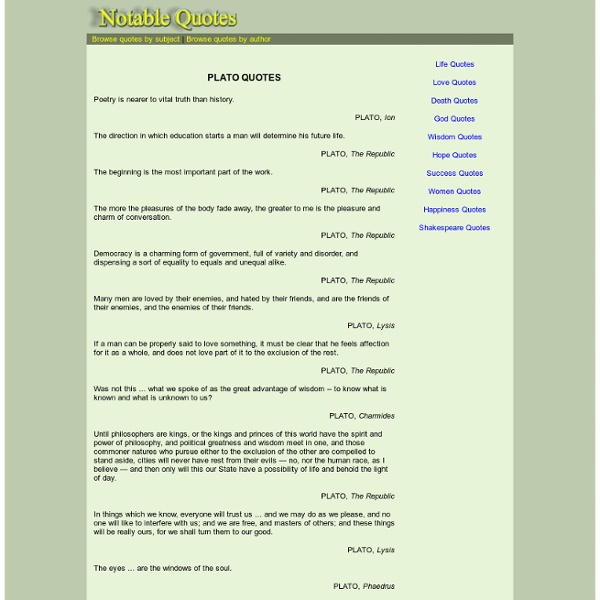 Poetry is nearer to vital truth than history. The direction in which education starts a man will determine his future life. The beginning is the most important part of the work. The more the pleasures of the body fade away, the greater to me is the pleasure and charm of conversation. Democracy is a charming form of government, full of variety and disorder, and dispensing a sort of equality to equals and unequal alike. Many men are loved by their enemies, and hated by their friends, and are the friends of their enemies, and the enemies of their friends. If a man can be properly said to love something, it must be clear that he feels affection for it as a whole, and does not love part of it to the exclusion of the rest. Was not this ... what we spoke of as the great advantage of wisdom -- to know what is known and what is unknown to us? The eyes ... are the windows of the soul. No evil can happen to a good man, neither in life nor after death. God is not the author of all things, but of good only.

Aristotle Quotes We become just by performing just actions, temperate by performing temperate actions, brave by performing brave actions. ARISTOTLE, Nicomachean Ethics As for the story, whether the poet takes it ready made or constructs it for himself, he should first sketch its general outline, and then fill in the episodes and amplify in detail. Poverty is the parent of revolution and crime. If you string together a set of speeches expressive of character, and well finished in point and diction and thought, you will not produce the essential tragic effect nearly so well as with a play which, however deficient in these respects, yet has a plot and artistically constructed incidents. Where perception is, there also are pain and pleasure, and where these are, there, of necessity, is desire. Dramatic action, therefore, is not with a view to the representation of character: character comes in as subsidiary to the actions. ARISTOTLE, quoted in Lives of Eminent Philosophers Wit is well-bred insolence.

I Love Philosophy.com Three Minute Philosophy Plato Plato (/ˈpleɪtoʊ/; Greek: Πλάτων Plátōn "broad"pronounced [plá.tɔːn] in Classical Attic; 428/427 or 424/423 – 348/347 BCE) was a philosopher, as well as mathematician, in Classical Greece. He is considered an essential figure in the development of philosophy, especially the Western tradition, and he founded the Academy in Athens, the first institution of higher learning in the Western world. Along with his teacher Socrates and his most famous student, Aristotle, Plato laid the foundations of Western philosophy and science.[2] Alfred North Whitehead once noted: "the safest general characterization of the European philosophical tradition is that it consists of a series of footnotes to Plato." Plato's dialogues have been used to teach a range of subjects, including philosophy, logic, ethics, rhetoric, religion and mathematics. Biography Early life Little can be known about Plato's early life and education, due to very few accounts. Birth and family Name Education Plato and Pythagoras Later life

The Socratic Method The Socratic Method:Teaching by Asking Instead of by Tellingby Rick Garlikov The following is a transcript of a teaching experiment, using the Socratic method, with a regular third grade class in a suburban elementary school. I present my perspective and views on the session, and on the Socratic method as a teaching tool, following the transcript. The class was conducted on a Friday afternoon beginning at 1:30, late in May, with about two weeks left in the school year. This time was purposely chosen as one of the most difficult times to entice and hold these children's concentration about a somewhat complex intellectual matter. The point was to demonstrate the power of the Socratic method for both teaching and also for getting students involved and excited about the material being taught. The experiment was to see whether I could teach these students binary arithmetic (arithmetic using only two numbers, 0 and 1) only by asking them questions. 1) "How many is this?" 4) Another way?

Parataxic distortion Parataxic distortion is a psychiatric term first used by Harry S. Sullivan to describe the inclination to skew perceptions of others based on fantasy. The "distortion" is a faulty perception of others, based not on actual experience with the other individual, but on a projected fantasy personality attributed to the individual. For example, when one falls in love, an image of another person as the “perfect match” or “soul mate” can be created when in reality, the other person may not live up to these expectations or embody the imagined traits at all. The fantasy personality is created in part from past experiences and from expectations as to how the person 'should be', and is formulated in response to emotional stress. Parataxic distortion is difficult to avoid because of the nature of human learning and interaction. Etymology[edit] From the Greek παράταξις, "placement side by side" Taxic - indicating movement towards or away from a specified stimulus. Attachment theory[edit] See also[edit]

Immanuel Kant Immanuel Kant (/kænt/;[1] German: [ɪˈmaːnu̯eːl kant]; 22 April 1724 – 12 February 1804) was a German philosopher who is widely considered to be a central figure of modern philosophy. He argued that fundamental concepts structure human experience, and that reason is the source of morality. His thought continues to have a major influence in contemporary thought, especially the fields of metaphysics, epistemology, ethics, political philosophy, and aesthetics.[2] Kant's major work, the Critique of Pure Reason (Kritik der reinen Vernunft, 1781),[3] aimed to explain the relationship between reason and human experience. With this project, he hoped to move beyond what he took to be failures of traditional philosophy and metaphysics. Kant argued that our experiences are structured by necessary features of our minds. Kant aimed to resolve disputes between empirical and rationalist approaches. Biography[edit] Young Kant was a solid, albeit unspectacular, student. Young scholar[edit] Early work[edit]

Logical Paradoxes Friedrich Nietzsche Friedrich Wilhelm Nietzsche (/ˈniːtʃə/[1] or /ˈniːtʃi/;[2] German: [ˈfʁiːdʁɪç ˈvɪlhɛlm ˈniːt͡sʃə]; 15 October 1844 – 25 August 1900) was a German philosopher, cultural critic, poet, composer and Latin and Greek scholar. He wrote several critical texts on religion, morality, contemporary culture, philosophy and science, displaying a fondness for metaphor[3] and irony. Nietzsche's key ideas include perspectivism, the will to power, the death of God, the Übermensch and eternal recurrence. Nietzsche began his career as a classical philologist—a scholar of Greek and Roman textual criticism—before turning to philosophy. As his caretaker, his sister assumed the roles of curator and editor of Nietzsche's manuscripts. Life[edit] Youth (1844–69)[edit] Born on 15 October 1844, Nietzsche grew up in the small town of Röcken, near Leipzig, in the Prussian Province of Saxony. While at Pforta, Nietzsche had a penchant for pursuing subjects that were considered unbecoming. Nietzsche in his younger days

Aristotle Aristotle's views on physical science profoundly shaped medieval scholarship. Their influence extended into the Renaissance and were not replaced systematically until the Enlightenment and theories such as classical mechanics. Some of Aristotle's zoological observations, such as on the hectocotyl (reproductive) arm of the octopus, were not confirmed or refuted until the 19th century. His ethics, though always influential, gained renewed interest with the modern advent of virtue ethics. The sum of his work's influence often ranks him among the world's top personalities of all time with the greatest influence, along with his teacher Plato, and his pupil Alexander the Great.[9][10] Life At about the age of eighteen, Aristotle moved to Athens to continue his education at Plato's Academy. Aristotle then accompanied Xenocrates to the court of his friend Hermias of Atarneus in Asia Minor. Aristotle was appointed as the head of the royal academy of Macedon. Thought Logic History

Rabindranath Tagore Rabindranath Tagoreβ[›] (Bengali pronunciation: [rəˈbindrəˈnɑt ˈtɑɡɔr] ( )), also written Rabīndranātha Thākura (Bengali: রবীন্দ্রনাথ ঠাকুর; pronounced: [rəˈbindrəˈnɑtə ˈtɑkʊrə]),[2] (7 May 1861 – 7 August 1941),γ[›] sobriquet Gurudev,δ[›] was a Bengali polymath who reshaped his region's literature and music. Author of Gitanjali and its "profoundly sensitive, fresh and beautiful verse", he became the first non-European to win the Nobel Prize in Literature in 1913. A Pirali Brahmin from Calcutta, Tagore wrote poetry as an eight-year-old. Early life: 1861–1878 The youngest of thirteen surviving children, Tagore was born in the Jorasanko mansion in Calcutta, India to parents Debendranath Tagore (1817–1905) and Sarada Devi (1830–1875).ε[›] The Tagore family came into prominence during the Bengal Renaissance that started during the age of Hussein Shah (1493–1519). "Rabi" was raised mostly by servants; his mother had died in his early childhood and his father travelled widely. Germany, 1931.