A People's History of the United States 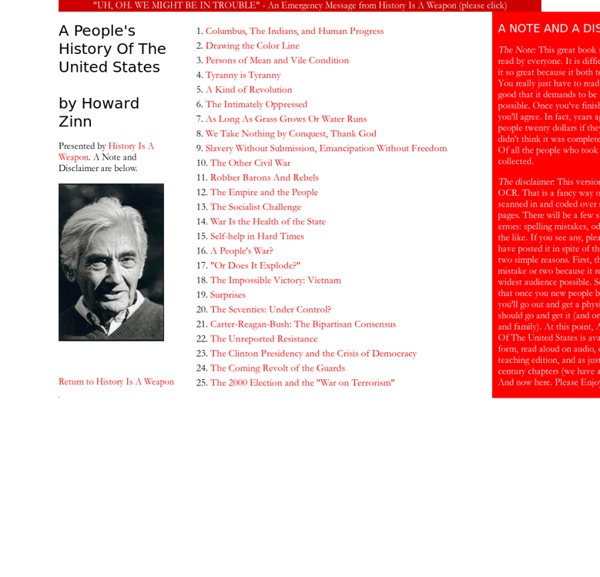 The Note: This great book should really be read by everyone. It is difficult to describe why it so great because it both teaches and inspires. You really just have to read it. We think it is so good that it demands to be as accessible as possible. Once you've finished it, we're sure you'll agree. In fact, years ago, we would offer people twenty dollars if they read the book and didn't think it was completely worth their time. The disclaimer: This version is made from OCR.

Primary sources Raising Our Voices A True Narrative of the Rise, Progresse, and Cessation of the Late Rebellion in Virginia, Most Humbly and Impartially Reported by His Majestyes Commissioners Appointed to Enquire into the Affaires of the Said Colony (1677) Proclamation of the New Hampshire Legislature on the Mast Tree Riot (1734) Letter Written by William Shirley to the Lords of Trade about the Knowles Riot (1747) Thomas Hutchinson Recounts the Reaction to the Stamp Act in Boston (1765) Samuel Drowne's Testimony on the Boston Massacre (1770) Armed Madhouse Central Buy the Audio Book on Amazon.com Drive your car pool completely mad — mad at the regime, mad at the No World Order, mad as hell and funny as hell — as friends of Greg Palast, “The Sid Vicious of Journalism” (Pacifica Radio), join the author in reading the New York Times bestseller, “ARMED MADHOUSE: Who’s Afraid of Osama Wolf?, China Floats Bush Sinks, the Scheme to Steal ‘08, No Child’s Behind Left and other Dispatches from the Front Lines of the Class War.” Get the facts that the mainstream media keeps hidden in the Fox-hole. From “America’s best investigative reporter — and the funniest” (Randi Rhodes) comes a five-disk CD of the New York Times bestseller read by the author and … Ed Asner Larry David Randi Rhodes Greg Proops Shiva Rose Janeane Garofalo Amy Goodman Medea Benjamin Mark Crispin Miller Kevin Danaher Jim Hightower Brod Bagert Jerry Quickley Randy Credico Brad Friedman … and Jello Biafra as the voice of Osama bin Laden.

Martin Scorsese Explains Why Future of Film is Bright in Open Letter to Daughter Martin Scorsese took a break from defending his "Wolf of Wall Street" to the press by penning an open letter to his daughter that made no mention of his latest, divisive film, but explained why he feels the future of filmmaking is a bright one. The reason according to Marty? Because movies can now be made on the fly and for cheap. "You can get beautiful images with affortable cameras," he says. "You can record sound. You can edit and mix and color-correct at home.

70 maps that explain America by Max Fisher and Dylan Matthews on July 1, 2015 The United States of America is many things. It is the world's most powerful country, and one of the largest. Hard Things You Need To Do To Be Successful You have to make the call you’re afraid to make. You have to get up earlier than you want to get up. You have to give more than you get in return right away. You have to care more about others than they care about you. You have to fight when you are already injured, bloody, and sore. History in Dispute: Charlottesville and Confederate Monuments Teaching with the News Objectives Students will: Understand the idea of historical memory. Contextualize recent events in Charlottesville within a larger historical controversy. Apply the concept of historical memory to the controversy over Confederate monuments.

Gender Equality Is a Myth! By Beyoncé Knowles-Carter We need to stop buying into the myth about gender equality. It isn’t a reality yet. Today, women make up half of the U.S. workforce, but the average working woman earns only 77 percent of what the average working man makes.

Author List The Author List This list is intended to provide the writings with some, perhaps minimal, context. It is not updated as often as the central page. A Sasha Abramsky ("Prison Nation") is a freelance journalist.