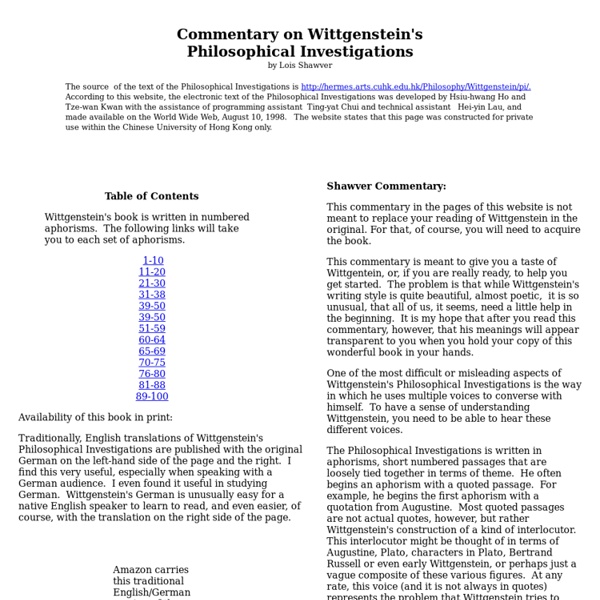 Shawver Commentary: This commentary in the pages of this website is not meant to replace your reading of Wittgenstein in the original. For that, of course, you will need to acquire the book. This commentary is meant to give you a taste of Wittgentein, or, if you are really ready, to help you get started. The problem is that while Wittgenstein's writing style is quite beautiful, almost poetic, it is so unusual, that all of us, it seems, need a little help in the beginning. It is my hope that after you read this commentary, however, that his meanings will appear transparent to you when you hold your copy of this wonderful book in your hands. One of the most difficult or misleading aspects of Wittgenstein's Philosophical Investigations is the way in which he uses multiple voices to converse with himself. The Philosophical Investigations is written in aphorisms, short numbered passages that are loosely tied together in terms of theme. So, the basic format of many of the aphorisms is:

Empedocles Empedocles (/ɛmˈpɛdəkliːz/; Ancient Greek: Ἐμπεδοκλῆς; Empedoklēs; Ancient Greek: [empedoklɛ̂ːs]; c. 490 – 430 BC) was a Greek pre-Socratic philosopher and a citizen of Agrigentum, a Greek city in Sicily. Empedocles' philosophy is best known for being the originator of the cosmogenic theory of the four Classical elements. He also proposed powers called Love and Strife which would act as forces to bring about the mixture and separation of the elements. These physical speculations were part of a history of the universe which also dealt with the origin and development of life. Influenced by the Pythagoreans, he supported the doctrine of reincarnation. Empedocles is generally considered the last Greek philosopher to record his ideas in verse.

On Certainty On Certainty (German: Über Gewißheit) is a philosophical book composed from the notes written by Ludwig Wittgenstein just prior to his death. Some of the notes were left at the home of G. E. M. Anscombe, who later compiled the notes into a book. The book's concerns are largely epistemological, its main theme being that there are some things which must be exempt from doubt in order for human practices to be possible (i.e. William James William Jamesb. New York, 1842; d. Chocorua, New Hampshire, 1910 Mary James complained of her eldest son William that "the trouble with him is that he must express every fluctuation of feeling, and especially every unfavorable symptom, without reference to the effect upon those about him." If this seems an overly somatic introduction to the great philosopher and psychologist William James, it is also appropriate: A life that culminated in a reconsideration of spirituality and consciousness in relation to physiology and neuroscience was also a life spent in perpetual diagnosis of backache, eyestrain, and nervous disorders. Science and Art Contend Born in New York City in 1842 and named for his prosperous paternal grandfather, William was the first-born child of Mary and Henry James Sr.

Citeology - Projects - Autodesk Research Update: We have submitted a Citeology paper to alt.CHI which you can download here. Citeology looks at the relationship between research publications through their use of citations. The names of each of the 3,502 papers published at the CHI and UIST Human Computer Interaction (HCI) conferences between 1982 and 2010 are listed by year and sorted with the most cited papers in the middle. In total, 11,699 citations were made from one article to another within this collection. Truth table Practically, a truth table is composed of one column for each input variable (for example, A and B), and one final column for all of the possible results of the logical operation that the table is meant to represent (for example, A XOR B). Each row of the truth table therefore contains one possible configuration of the input variables (for instance, A=true B=false), and the result of the operation for those values. See the examples below for further clarification. Ludwig Wittgenstein is often credited with their invention in the Tractatus Logico-Philosophicus.[1]

Wittgenstein, Ludwig  Ludwig Wittgenstein is one of the most influential philosophers of the twentieth century, and regarded by some as the most important since Immanuel Kant. His early work was influenced by that of Arthur Schopenhauer and, especially, by his teacher Bertrand Russell and by Gottlob Frege, who became something of a friend. This work culminated in the Tractatus Logico-Philosophicus, the only philosophy book that Wittgenstein published during his lifetime.

Existentialist Aesthetics First published Fri Jun 26, 2009 Many of the philosophers commonly described as “existentialist” have made original and decisive contributions to aesthetic thinking. In most cases, a substantial involvement in artistic practice (as novelists, playwrights or musicians) nourished their thinking on aesthetic experience. This is true already of two of the major philosophers who inspired 20th century existentialism: Søren Kierkegaard and Friedrich Nietzsche.

Wittgenstein : Language Games This work is licensed under a Creative Commons Attribution-Share Alike 2.5 License In his later work Wittgenstein developed the idea that the job of philosophy was to clear up the conceptual confusions that arose through our unexamined use of language. Dissatisfied with the traditional expressionist and reflective approaches to language he sought a new model which would allow greater flexibility. Central to this was the concept of rule governed activity or 'language game'. Wittgenstein introduces the concept of 'language games' because of the analogy between using language and playing a game according to certain rules.

Analytic Philosophy  The school of analytic philosophy has dominated academic philosophy in various regions, most notably Great Britain and the United States, since the early twentieth century. It originated around the turn of the twentieth century as G. E. Moore and Bertrand Russell broke away from what was then the dominant school in the British universities, Absolute Idealism. Rabindranath Tagore Rabindranath Tagoreβ[›] (Bengali pronunciation: [rəˈbindrəˈnɑt ˈtɑɡɔr] ( )), also written Rabīndranātha Thākura (Bengali: রবীন্দ্রনাথ ঠাকুর; pronounced: [rəˈbindrəˈnɑtə ˈtɑkʊrə]),[2] (7 May 1861 – 7 August 1941),γ[›] sobriquet Gurudev,δ[›] was a Bengali polymath who reshaped his region's literature and music. Author of Gitanjali and its "profoundly sensitive, fresh and beautiful verse", he became the first non-European to win the Nobel Prize in Literature in 1913.