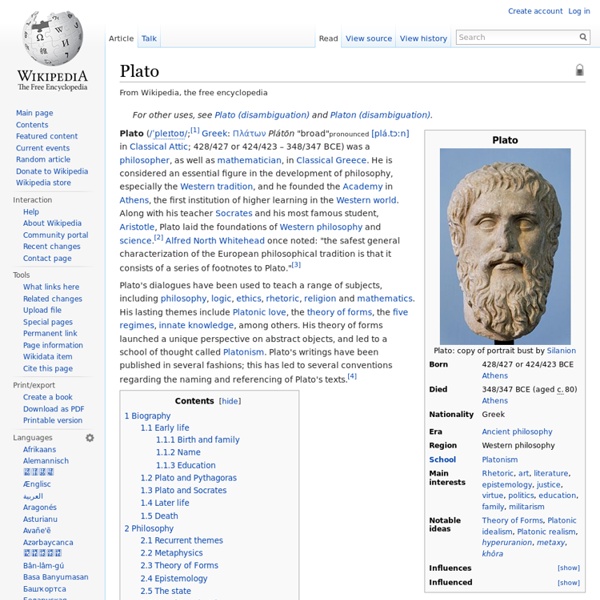 Plato (/ˈpleɪtoʊ/; Greek: Πλάτων Plátōn "broad"pronounced [plá.tɔːn] in Classical Attic; 428/427 or 424/423 – 348/347 BCE) was a philosopher, as well as mathematician, in Classical Greece. He is considered an essential figure in the development of philosophy, especially the Western tradition, and he founded the Academy in Athens, the first institution of higher learning in the Western world. Along with his teacher Socrates and his most famous student, Aristotle, Plato laid the foundations of Western philosophy and science.[2] Alfred North Whitehead once noted: "the safest general characterization of the European philosophical tradition is that it consists of a series of footnotes to Plato." Plato's dialogues have been used to teach a range of subjects, including philosophy, logic, ethics, rhetoric, religion and mathematics. His lasting themes include Platonic love, the theory of forms, the five regimes, innate knowledge, among others. Biography Early life Birth and family Name Education

Royal Society national academy of science in the United Kingdom The Royal Society, formally The Royal Society of London for Improving Natural Knowledge,[1] is a learned society and the United Kingdom's national academy of sciences. Founded on 28 November 1660, it was granted a royal charter by King Charles II as "The Royal Society".[1] It is the oldest national scientific institution in the world.[2] The society fulfils a number of roles: promoting science and its benefits, recognising excellence in science, supporting outstanding science, providing scientific advice for policy, fostering international and global co-operation, education and public engagement. It also performs these roles for the smaller countries of the Commonwealth.

Hermes ancient Greek god of boundaries, roads, merchants, and thieves Hermes (; Greek: Ἑρμῆς) is a deity in ancient Greek religion and mythology. Hermes is considered the herald of the gods, as well as the protector of human heralds, travellers, thieves,[1] merchants, and orators.[2][3] He is able to move quickly and freely between the worlds of the mortal and the divine, aided by his winged sandals. Hermes plays the role of the psychopomp or "soul guide" — a conductor of souls into the afterlife.[4][5] His attributes and symbols include the herma, the rooster, the tortoise, satchel or pouch, talaria (winged sandals), and winged helmet or simple petasos, as well as the palm tree, goat, the number four, several kinds of fish, and incense.[9] However, his main symbol is the caduceus, a winged staff intertwined with two snakes copulating and carvings of the other gods.[10] His attributes had previously influenced the earlier Etruscan god Turms, a name borrowed from the Greek "herma".[11]

Socratic dialogue A genre of literary prose Socratic dialogue (Ancient Greek: Σωκρατικὸς λόγος) is a genre of literary prose developed in Greece at the turn of the fourth century BC. It is preserved in the works of Plato and Xenophon. Gulliver's Travels 1726 novel by Jonathan Swift Gulliver's Travels, or Travels into Several Remote Nations of the World. In Four Parts. By Lemuel Gulliver, First a Surgeon, and then a Captain of Several Ships is a prose satire[1][2] of 1726 by the Irish writer and clergyman Jonathan Swift, satirising both human nature and the "travellers' tales" literary subgenre.

Napoleon Imperial Standard of Napoleon I Napoléon Bonaparte (/nəˈpoʊliən, -ˈpoʊljən/;[2] French: [napɔleɔ̃ bɔnapaʁt], born Napoleone di Buonaparte; 15 August 1769 – 5 May 1821) was a French military and political leader who rose to prominence during the latter stages of the French Revolution and its associated wars. As Napoleon I, he was Emperor of the French from 1804 to 1814 and again in 1815. Napoleon dominated European affairs for almost two decades while leading France against a series of coalitions in the Revolutionary Wars and the Napoleonic Wars.

Justice Concept of moral fairness and administration of the law Harmony[edit] In his dialogue Republic, Plato uses Socrates to argue for justice that covers both the just person and the just City State. Ernst Mayr German-American evolutionary biologist His theory of peripatric speciation (a more precise form of allopatric speciation which he advanced), based on his work on birds, is still considered a leading mode of speciation, and was the theoretical underpinning for the theory of punctuated equilibrium, proposed by Niles Eldredge and Stephen Jay Gould. Mayr is sometimes credited with inventing modern philosophy of biology, particularly the part related to evolutionary biology, which he distinguished from physics due to its introduction of (natural) history into science. Biography[edit] Mayr was the second son of Helene Pusinelli and Dr. Otto Mayr.

Mencius A key belief of his was that humans are innately good, but that this quality requires cultivation and the right environment to flourish. He also taught that rulers must justify their position of power by acting benevolently towards their subjects, and in this sense they are subordinate to the masses. Life[edit]

City-state Independent or autonomous entity whose territory consists of a city A city-state is a sovereign state, also described as a type of small independent country, that usually consists of a single city and its dependent territories. Historically, this included cities such as Rome, Athens, Carthage,[1] and the Italian city-states during the Renaissance. As of 2019[update], only a handful of sovereign city-states exist, with some disagreement as to which are city-states. A great deal of consensus exists that the term properly applies currently to Monaco, Singapore, and Vatican City.

Philosophy Philosophy is the study of general and fundamental problems, such as those connected with reality, existence, knowledge, values, reason, mind, and language.[1][2] Philosophy is distinguished from other ways of addressing such problems by its critical, generally systematic approach and its reliance on rational argument.[3] In more casual speech, by extension, "philosophy" can refer to "the most basic beliefs, concepts, and attitudes of an individual or group".[4] The word "philosophy" comes from the Ancient Greek φιλοσοφία (philosophia), which literally means "love of wisdom".[5][6][7] The introduction of the terms "philosopher" and "philosophy" has been ascribed to the Greek thinker Pythagoras.[8] Areas of inquiry Philosophy is divided into many sub-fields. These include epistemology, logic, metaphysics, ethics, and aesthetics.[9][10] Some of the major areas of study are considered individually below.

Thomas Aquinas Thomas Aquinas (; Italian: Tommaso d'Aquino, lit. 'Thomas of Aquino'; 1225 – 7 March 1274) was an Italian[10][11] Dominican friar, philosopher, Catholic priest, and Doctor of the Church. An immensely influential philosopher, theologian, and jurist in the tradition of scholasticism, he is also known within the latter as the Doctor Angelicus and the Doctor Communis.[12] The name Aquinas identifies his ancestral origins in the county of Aquino in present-day Lazio, Italy. He was the foremost classical proponent of natural theology and the father of Thomism; of which he argued that reason is found in God. His influence on Western thought is considerable, and much of modern philosophy developed or opposed his ideas, particularly in the areas of ethics, natural law, metaphysics, and political theory.