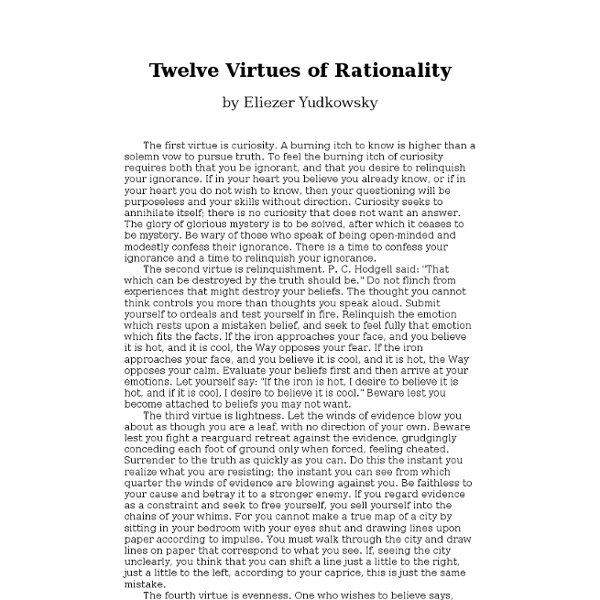 by Eliezer Yudkowsky The first virtue is curiosity. A burning itch to know is higher than a solemn vow to pursue truth. To feel the burning itch of curiosity requires both that you be ignorant, and that you desire to relinquish your ignorance. If in your heart you believe you already know, or if in your heart you do not wish to know, then your questioning will be purposeless and your skills without direction. Curiosity seeks to annihilate itself; there is no curiosity that does not want an answer. The second virtue is relinquishment. The third virtue is lightness. The fourth virtue is evenness. The fifth virtue is argument. The sixth virtue is empiricism. The seventh virtue is simplicity. The eighth virtue is humility. The ninth virtue is perfectionism. The tenth virtue is precision. The eleventh virtue is scholarship. Before these eleven virtues is a virtue which is nameless. Miyamoto Musashi wrote, in The Book of Five Rings: How can you improve your conception of rationality?

The L-Space Web: Death and What Comes Next The L-Space Web Copyright © Terry Pratchett 2002 When Death met the philosopher, the philosopher said, rather excitedly: "At this point, you realise, I'm both dead and not dead." 6 Questions That Will Make You Fee Peaceful and Complete “The best place to find a helping hand is at the end of your own arm.” ~Swedish Proverb When I was in my mid-twenties an unhealthy relationship with an unhealthy guy sent me packing off to the corner of New Mexico to find myself. In a new age, self-discovery kind of world—a hubbub of a town filled with people in transition—I was graced to meet many powerful healers, gurus, shamans, and teachers. I became a workshop junkie.

The Online Learning Blog from Study2U Supposedly browsing the internet requires more brain power than watching television. Although judging from some of the websites we’ve come across that assumption is cast into doubt. Here’s some of the sites we like that might get your brain to sit up and listen. Dokkōdō The "Dokkōdō" [ (Japanese: 独行道?); "The Path of Aloneness", "The Way to Go Forth Alone", or "The Way of Walking Alone"] is a short work written by Miyamoto Musashi (宮本 武蔵) a week before he died in 1645. It consists of either nineteen or twenty-one precepts; precepts 4 and 20 are omitted from the former version. "Dokkodo" was largely composed on the occasion of Musashi giving away his possessions in preparation for death, and was dedicated to his favorite disciple, Terao Magonojō (to whom the earlier Go rin no sho [The Book of Five Rings] had also been dedicated), who took them to heart. "Dokkōdō" expresses a stringent, honest, and ascetic view of life.

8 Harsh Truths that Will Improve Your Life - Dumb Little Man They say life is what we make of it. By the end of this post, I hope to have helped you decide whether that statement is true or not. There is no doubt that life has its ups and downs. List of paradoxes This is a list of paradoxes, grouped thematically. The grouping is approximate, as paradoxes may fit into more than one category. Because of varying definitions of the term paradox, some of the following are not considered to be paradoxes by everyone. This list collects only scenarios that have been called a paradox by at least one source and have their own article. Although considered paradoxes, some of these are based on fallacious reasoning, or incomplete/faulty analysis. A Lesson on Forgiveness The Buddha was sitting under a tree talking to his disciples when a man came and spit on his face. He wiped it off, and he asked the man, “What next? What do you want to say next?” The man was a little puzzled because he himself never expected that when you spit on somebody’s face, he will ask, “What next?” He had no such experience in his past.

Buddhism and the Brain ? SEEDMAGAZINE.COM Credit: Flickr user eschipul Over the last few decades many Buddhists and quite a few neuroscientists have examined Buddhism and neuroscience, with both groups reporting overlap. I’m sorry to say I have been privately dismissive. One hears this sort of thing all the time, from any religion, and I was sure in this case it would break down upon closer scrutiny. When a scientific discovery seems to support any religious teaching, you can expect members of that religion to become strict empiricists, telling themselves and the world that their belief is grounded in reality. They are always less happy to accept scientific data they feel contradicts their preconceived beliefs. The Best Science Fiction Books (According to Reddit) Recently, someone asked Reddit for a list of the best science fiction books of all time. Being a fan of sci-fi, and wanting to expand my own reading list, I thought it would be helpful to tally the results and preserve them here for future reference. I've also included selected quotes from the comments, as well as my own notes on the books I've already read. PS: All book images in this post are copyright Amazon, and were retrieved using my Big Book Search Engine.

Relationship Rules Human beings crave intimacy, need to love and be loved. Yet people have much trouble doing so. It's clear from the many letters I get that lots of folks have no idea what a healthy relationship even looks like. Because I care about these things, and care about the environments children grow in, I'm using this space as an attempt to remedy the problem—again. Top 25 Ayn Rand Quotes - Top 10 Lists Politics Ayn Rand, was a Russian-born American novelist and philosopher. She is widely known for her best-selling novels The Fountainhead and Atlas Shrugged, and for developing a philosophical system she called Objectivism. She was an uncompromising advocate of rational individualism and laissez-faire capitalism, and vociferously opposed socialism, altruism, and other contemporary philosophical trends. She is generally either hated or loved. Her objectivist philosophy had a strong influence on the evolution of the Libertarian political philosophy movement (though she rejected the title).

Related:  traceysimms • Literature/Books • willprez
Related:  Logical Paradoxes   -  logic and perception - topical index -The Skeptic's Dictionary - Skepdic.com   -  Aristotle - Wikipedia, the free encyclopedia   -  The Book of Symbols: Carl Jung’s Catalog of the Unconscious | Brain Pickings   -  Artige bilder   -  Idea Mapping   -  Café Communications -- Deadlines - YouTube   -  Best of   -  Global Financial Crisis: A World in Debt   -  Robert Lanza, M.D. – BIOCENTRISM » Is Death An Illusion? Evidence Suggests Death Isn’t the End   -  Jared Ficklin: New ways to see music (with color! and fire!) | Video on TED.com   -  Neil Harbisson: I listen to color | Video on TED.com   -  Eliminative materialism - Wikipedia, the free encyclopedia   -  Space: Thinkfinity Resources | Thinkfinity   -  Tristram Stuart: The global food waste scandal | Video on TED.com   -  Andrew Blum: What is the Internet, really? | Video on TED.com   -  Home   -  8 Types Of Imagination   -  The Science of Productivity   -  An Interactive Guide To The Fourier Transform   -  How to Think Like Sherlock Holmes: Lessons in Mindfulness and Creativity from the Great Detective | Brain Pickings   -  The 150 Things the World's Smartest People Are Afraid Of | Motherboard   -  Too Oddities » Exit stage right, End of set   -  Amanda Palmer: The art of asking | Video on TED.com   -  The Venn Diagram of Irrational Nonsense   -  Websites to make you think | Study2U   -  Instagram's Envy Effect   -  10 Mind-Blowing Theories That Will Change Your Perception of the World   -  Welfare Statistics and Demographics – Statistic Brain   -  Nikola Tesla's Best Productivity Tricks   -  Daniel Dennett on Tools To Transform Our Thinking - YouTube   -  The 50 Books Everyone Needs to Read, 1963-2013   -  An Illustrated Book of Bad Arguments   -  How to Change Education - from the ground up - YouTube   -  How to Stop Procrastinating by Using the “Seinfeld Strategy”   -  30 Questions to Ask Yourself Before You Die.   -  10 Paradoxical Traits Of Creative People   -  Chrystia Freeland: The rise of the new global super-rich | Video on TED.com