The Book of Symbols: Carl Jung’s Catalog of the Unconscious 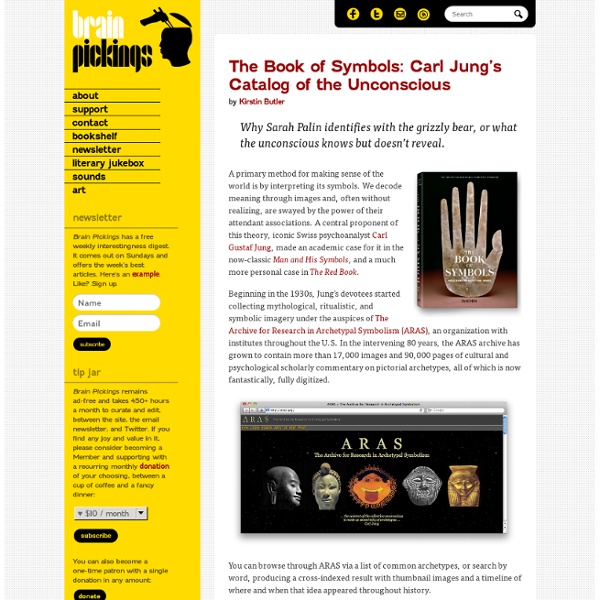 by Kirstin Butler Why Sarah Palin identifies with the grizzly bear, or what the unconscious knows but doesn’t reveal. A primary method for making sense of the world is by interpreting its symbols. We decode meaning through images and, often without realizing, are swayed by the power of their attendant associations. A central proponent of this theory, iconic Swiss psychoanalyst Carl Gustaf Jung, made an academic case for it in the now-classic Man and His Symbols, and a much more personal case in The Red Book. Beginning in the 1930s, Jung’s devotees started collecting mythological, ritualistic, and symbolic imagery under the auspices of The Archive for Research in Archetypal Symbolism (ARAS), an organization with institutes throughout the U.S. You can browse through ARAS via a list of common archetypes, or search by word, producing a cross-indexed result with thumbnail images and a timeline of where and when that idea appeared throughout history. Donating = Loving Share on Tumblr

The symbol of the Swastika and its 12,000-year-old history The swastika is a symbol used by of one of the most hated men on Earth, a symbol that represents the slaughter of millions of people and one of the most destructive wars on Earth. But Adolf Hitler was not the first to use this symbol. In fact, it was used as a powerful symbol thousands of years before him, across many cultures and continents. For the Hindus and Buddhists in India and other Asian countries, the swastika was an important symbol for many thousands of years and, to this day, the symbol can still be seen in abundance - on temples, buses, taxis, and on the cover of books. 10 Spiritual Symbols You MUST Know Spiritual symbols are everywhere in our world! In fact they’re so pervasive, it’s almost hard to distinguish- and know- about them all. Luckily, we’ve done the work for you. SEE ALSO: Understanding Buddhism: 10 Reasons It’s NOT A Religion Hamsa Hamsa is the Hebrew word meaning “five”, and is represented with a palm-shaped amulet and an eye in the middle of the palm.

Numbers and their Meanings Powerful Sacred Jewelry and Talismans Masterfully Crafted by the Known Artist - David Weitzman Numerology | Kabbalah | Amulets Numbers and Their Meanings Meaning of the Ankh, an Ancient Egyptian Symbol The ankh is the most well-known symbol to come out of ancient Egypt. In their hieroglyphic system of writing the ankh represents the concept of eternal life, and that is the general meaning of the symbol. Construction of the Image Fascinating Chart Details The History of the Alphabet Most of us use the letters of the alphabet everyday, but did you ever stop to wonder how their shapes came to be? The history of the alphabet is fascinating, and each of the 26 letters has its own unique story. Matt Baker (of UsefulCharts) has designed a handy poster that documents the evolution of our familiar alphabet from its ancient Egyptian Proto-Sinaitic roots (c. 1750 BCE) up to present day Latin script. The limited edition Evolution of the Alphabet chart shows how early shapes and symbols eventually morphed to become the ABCs we know today. While some letters are recognizable quite early on, others have little resemblance at all. The letter “A” for example, began as an Egyptian hieroglyphic that looks like an animal head with horns.

Universal symbolism — Square The Circle We can begin to rediscover this connection to nature and our place in it by exploring ancient sacred symbolism. The mythologized processes of nature – summer, winter, the moon’s phases, for example, are symbolic expressions of the inner, unconscious drama of the psyche. Symbols project this on to nature and unite us with our true self. There are a number of ways in which we can seek archetypal imagery and our instinctual nature. Archive for Research in Archetypal Symbolism The Archive for Research in Archetypal Symbolism has contributed more than 16,000 images documenting symbols, myths, and rituals to the Artstor Digital Library. The Archive for Research in Archetypal Symbolism (ARAS) explores the universality of certain iconographies and themes, illustrating commonalities in the ways human beings across the world have thought about and represented different phenomena through time. Each image includes commentary that points to its unique cultural history and contextualizes it within larger archetypal patterns and historical developments. The collection provides a resource to explore the power of symbols and it supports interdisciplinary research in the humanities, including the interpretation of images in psychotherapy and dreams.

Eisenstein, Synaesthesia, Symbolism and the Occult Traditions – Offscreen The evidence of Eisenstein’s interest in synaesthesia and the interaction of the senses is present in his library. According to Hakan Lovgren, in the 1930s he began to acquire books by the Russian symbolist poets and writers, including Viacheslav Ivanov, Andrei Bely, Valery Briusov, and Sergei Durylin. [1] A marked interest in alchemy and other occult and hermetic traditions was characteristic of artists in the symbolist movement. However, Eisenstein gives a sardonic account of his early encounter with one of these traditions, Rosicrucianism. When he was billeted in Minsk in 1920, during the Civil War, he attended classes in the disclosures of mysterious rites, explained and presided over by Professor Zubakin, a Rosicrucian bishop practising under the name of Bogori the Second. Eisenstein tells how he was so bored that he fell asleep during the study of the occult traditions of the Cabbala, and the Arcana of the Tarot. This description resembles an extract from a montage sequence.

Alternative Religious Symbols Symbols are a quick way to communicate often complex ideas. Religions, particularly esoteric ones, commonly employ a great amount of symbolism to represent their beliefs. Click on a subgroup name to view associated symbol galleries. Elemental Symbols The Greeks proposed the existence of five basic elements. Simboli > Esoterico English Français Español Deutsch Síla na Géige - Sheela na Gig and Sacred Space Síla na Géige is the Cailleach as Creator. She is the Hag of the winds and of winter, the Old Woman who lives in the stones. She is Sheelah with her branch, who strikes the ground with her stick to make the earth freeze, who washes her plaid in the whirlpool of Coire Bhreacain to bring the snow that covers the land. And then in the spring, she waves her wand and the seasons turn again. As she renews the land she renews herself. She is the crux point on the edge between life and death, between death and rebirth.