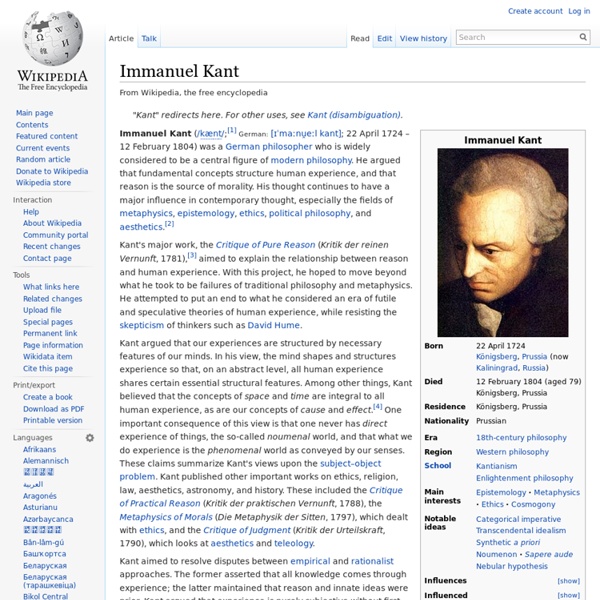 Immanuel Kant (/kænt/;[1] German: [ɪˈmaːnu̯eːl kant]; 22 April 1724 – 12 February 1804) was a German philosopher who is widely considered to be a central figure of modern philosophy. He argued that fundamental concepts structure human experience, and that reason is the source of morality. His thought continues to have a major influence in contemporary thought, especially the fields of metaphysics, epistemology, ethics, political philosophy, and aesthetics.[2] Kant's major work, the Critique of Pure Reason (Kritik der reinen Vernunft, 1781),[3] aimed to explain the relationship between reason and human experience. With this project, he hoped to move beyond what he took to be failures of traditional philosophy and metaphysics. He attempted to put an end to what he considered an era of futile and speculative theories of human experience, while resisting the skepticism of thinkers such as David Hume. Kant argued that our experiences are structured by necessary features of our minds. [edit]

Related:  - • the function of reason - Whitehead • The problems with philosophy

Teleology A teleology (from Ancient Greek telos, meaning roughly "end" or "purpose",[1] and -logia, meaning "study of, discourse") is an account of a given thing's end or purpose. For instance, we might give a teleological account of why forks have prongs by showing their purpose—how the design helps humans to eat certain foods. Stabbing food and helping humans eat is what forks are for.

Critique of Pure Reason 1781 book by Immanuel Kant The Critique of Pure Reason (Kritik der reinen Vernunft) (1781; second edition 1787) is a book by the German philosopher Immanuel Kant, in which the author seeks to determine the limits and scope of metaphysics. Also referred to as Kant's "First Critique", it was followed by the Critique of Practical Reason (1788) and the Critique of Judgment (1790). In the preface to the first edition, Kant explains that by a "critique of pure reason" he means a critique "of the faculty of reason in general, in respect of all knowledge after which it may strive independently of all experience" and that he aims to reach a decision about "the possibility or impossibility of metaphysics". Kant further elaborates on the distinction between "analytic" and "synthetic" judgments.

plato.stanford 1. Life and works Immanuel Kant was born April 22, 1724 in Königsberg, near the southeastern shore of the Baltic Sea. Issues in Science and Religion Issues in Science and Religion is a book by Ian Barbour. A biography provided by the John Templeton Foundation and published by PBS online states this book "has been credited with literally creating the contemporary field of science and religion."[1] Contents[edit] Archimedes Greek mathematician, physicist, engineer, inventor, and astronomer Archimedes of Syracuse (;[3] Ancient Greek: Ἀρχιμήδης; Doric Greek: [ar.kʰi.mɛː.dɛ̂ːs]; c. 287 – c. 212 BC) was a Greek mathematician, physicist, engineer, astronomer, and inventor.[4] Although few details of his life are known, he is regarded as one of the leading scientists in classical antiquity. Considered to be the greatest mathematician of ancient history, and one of the greatest of all time,[5] Archimedes anticipated modern calculus and analysis by applying the concept of the infinitely small and the method of exhaustion to derive and rigorously prove a range of geometrical theorems,[6][7] including: the area of a circle; the surface area and volume of a sphere; area of an ellipse; the area under a parabola; the volume of a segment of a paraboloid of revolution; the volume of a segment of a hyperboloid of revolution; and the area of a spiral.[8][9] Biography Discoveries and inventions

plato.stanford 1. Aims and Methods of Moral Philosophy The most basic aim of moral philosophy, and so also of the Groundwork, is, in Kant’s view, to “seek out” the foundational principle of a “metaphysics of morals,” which Kant understands as a system of a priori moral principles that apply the CI to human persons in all times and cultures. Kant pursues this project through the first two chapters of the Groundwork. Modernization Modernization theory is a theory used to explain the process of modernization within societies. Modernization refers to a model of a progressive transition from a 'pre-modern' or 'traditional' to a 'modern' society. The theory looks at the internal factors of a country while assuming that, with assistance, "traditional" countries can be brought to development in the same manner more developed countries have. Modernization theory attempts to identify the social variables that contribute to social progress and development of societies, and seeks to explain the process of social evolution. Modernization theory is subject to criticism originating among socialist and free-market ideologies, world-systems theorists, globalization theory and dependency theory among others.

Facts & Biography His life Archimedes probably spent some time in Egypt early in his career, but he resided for most of his life in Syracuse, the principal Greek city-state in Sicily, where he was on intimate terms with its king, Hieron II. Archimedes published his works in the form of correspondence with the principal mathematicians of his time, including the Alexandrian scholars Conon of Samos and Eratosthenes of Cyrene. He played an important role in the defense of Syracuse against the siege laid by the Romans in 213 bce by constructing war machines so effective that they long delayed the capture of the city. When Syracuse eventually fell to the Roman general Marcus Claudius Marcellus in the autumn of 212 or spring of 211 bce, Archimedes was killed in the sack of the city.

eric-voegelin-john-locke-donald-devine No matter how conservative intellectuals try, they just do not seem able to escape John Locke. Jonah Goldberg’s well-received Suicide of the West proudly called America’s Declaration of Independence “echoes of” the great English Enlightenment philosopher John Locke, saying U.S. history was “more Locke than anything Locke imagined.” He inspired “a government but not a state”: a government with power divided internally between national and local governments and further divided in a great market of free associations; a government that even overcame the Iron Law of Oligarchy, and that restrained elite and popular abuses. In short, he inspired the “miracle” that is modern conservatism. Émile Durkheim David Émile Durkheim (French: [emil dyʁkɛm] or [dyʁkajm];[1] April 15, 1858 – November 15, 1917) was a French sociologist, social psychologist and philosopher. He formally established the academic discipline and, with Karl Marx and Max Weber, is commonly cited as the principal architect of modern social science and father of sociology.[2][3] Durkheim was also deeply preoccupied with the acceptance of sociology as a legitimate science.

Voltaire French writer, historian and philosopher François-Marie Arouet (French: [fʁɑ̃swa maʁi aʁwɛ]; 21 November 1694 – 30 May 1778), known by his nom de plume Voltaire (;[5][6][7] also ,[8][9] French: [vɔltɛːʁ]), was a French Enlightenment writer, historian, and philosopher famous for his wit, his criticism of Christianity—especially the Roman Catholic Church—as well as his advocacy of freedom of speech, freedom of religion, and separation of church and state. Biography