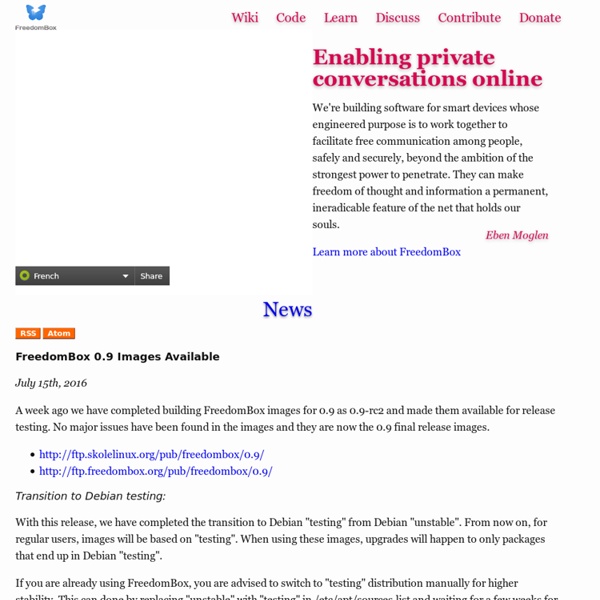 I am pleased to announce our first FreedomBox software release. The FreedomBox 0.1 image is available here (.torrent) (sha512sum: 867f5bf462102daef82a34165017b9e67ed8e09116fe46edd67730541bbfb731083850ab5e28ee40bdbc5054cb64e4d0e46a201797f27e0b8f0d2881ef083b40). This 0.1 version is primarily a developer release, which means that it focuses on architecture and infrastructure rather than finish work. The exception to this is privoxy-freedombox, the web proxy discussed in previous updates, which people can begin using right now to make their web browsing more secure and private and which will very soon be available on non-FreedomBox systems. More information on that tool at the end of this post. What have we accomplished?

www.columbia.edu/~sss31/rainbow/murphy.combat.html 1. If the enemy is in range, so are you. 2. Incoming fire has the right of way. 3. Don't look conspicuous, it draws fire. 4. Tor (anonymity network) Tor (previously an acronym for The Onion Router)[4] is free software for enabling online anonymity and censorship resistance. Tor directs Internet traffic through a free, worldwide, volunteer network consisting of more than five thousand relays[5] to conceal a user's location or usage from anyone conducting network surveillance or traffic analysis. Using Tor makes it more difficult to trace Internet activity, including "visits to Web sites, online posts, instant messages, and other communication forms", back to the user[6] and is intended to protect the personal privacy of users, as well as their freedom and ability to conduct confidential business by keeping their internet activities from being monitored.

Tor traffic disguised as Skype video calls to fool repressive governments Computer scientists have released a tool that disguises communications sent through the Tor anonymity service as Skype video calls, a cloak that's intended to prevent repressive governments from blocking the anonymous traffic. SkypeMorph, as the application is called, is designed to remedy a fundamental limitation of Tor: While the communications are cryptographically secured, unique characteristics of their individual data packets make them easy to identify as they travel over the networks. In the past, for example, the cryptographic key exchange was different in Tor transactions and the certificates used were typically valid for only a matter of hours, compared with as long as a year or two for certificates used by most Web servers. These fingerprints made it possible for government censors in Iran, China, and elsewhere to block data traveling over Tor while leaving the rest of the country's communications intact. A censorship arms race

Downloads BackTrack 5 comes in several flavours and architectures. The following page will help you choose the right version for you. Although registration is not required, we would certainly appreciate it – and it would also give us the opportunity to update you when there are important BackTrack updates or news. BackTrack 5 is OUTDATED and no longer supported – Downloads have been discontinued . Please check the KALI LINUX project instead. File Sharing News, Videos, Reviews and Gossip - Lifehacker Magnet links are not nessesarily "tracker-free". Here's and example of a magnet link from "The Piratebay" (no, it does not link to copyrighted content): magnet:?xt=urn:btih:d2d30ab2a7b22f6af5ca5c5b8af6b7...&dn=test_testing_02&tr=udp%3A%2F%2Ftracker.openbittorrent.com%3A80&tr=udp%3A%2F%2Ftracker.publicbt.com%3A80&tr=udp%3A%2F%2Ftracker.ccc.de%3A80 Note how their clearly is a tracker in the link contents?

Home uses for Hydrogen Peroxide for disinfection and sanitizing Many home uses for hydrogen peroxide are all about disinfection and sanitizing. Or, to say it another way: OUT WITH THE GROSS! Many of the benefits of hydrogen peroxide begin with its value in killing germs. I've been using hydrogen peroxide for years, and some of my favorite uses are for disinfection. Hydrogen peroxide helps keep things from getting gross, and helps to clean up things that have already gotten gross.... This link will take you to information on home uses for hydrogen peroxide for cleaning carpets, walls, windows, bathrooms and so on. ARK - The Next Generation Portable Wireless Charger by BEZALEL Corp. ARK is the next generation of wireless phone charging. ARK charges your cellphones at any time; any place, and most importantly, it is 100% cord free ---- which will make your life easier than ever before. ARK is extremely easy to use, stable, reliable, and fits into your everyday life. ARK is the result of our efforts to make life simpler. Once you become acquainted with its wireless charging capabilities, ARK will become an integral part of your daily life.

Silent Circle's latest app democratizes encryption. Governments won't be happy Courtesy of Silent Circle For the past few months, some of the world’s leading cryptographers have been keeping a closely guarded secret about a pioneering new invention. Today, they’ve decided it’s time to tell all. Ryan Gallagher is a journalist who reports on surveillance, security, and civil liberties. Follow Back in October, the startup tech firm Silent Circle ruffled governments’ feathers with a “surveillance-proof” smartphone app to allow people to make secure phone calls and send texts easily. Lightweight Portable Security 15 June 2011: LPS-Remote Access was certified by AFNIC to connect to the GIG for general telecommuting use Lightweight Portable Security (LPS) creates a secure end node from trusted media on almost any Intel-based computer (PC or Mac). LPS boots a thin Linux operating system from a CD or USB flash stick without mounting a local hard drive. Administrator privileges are not required; nothing is installed. The LPS family was created to address particular use cases: LPS-Public is a safer, general-purpose solution for using web-based applications.

Obfsproxy: the next step in the censorship arms race On Feb 9, Iran started to filter SSL connections on much of their network. Since the Tor protocol uses SSL, that means Tor stopped working too — even Tor with bridges, since bridges use SSL too. We've been quietly developing Obfsproxy, a new tool to make it easier to change how Tor traffic looks on the network. In late 2011 Iran moved into the #2 position in global Tor user count, and several important political events are scheduled in Iran this month and next. This situation seemed like a good time to test our new tool while also helping improve Internet freedom around the world.

Free Spiritual Guidance Tarot Reading In-depth reading to focus on the larger lessons and wisdom behind your experience... You will be choosing 5 cards one at a time. Each Card has a meaning for the position it is drawn in, so for the first card you draw read "position 1" , the second card "position 2" and so on. Every card will open in a new window, so you will need to have your pop-up blockers turned off. Before you choose each card clear your mind and read the position meaning listed below that corresponds to the card you are on. BlackSquare Enigma - Patented USB Encryption Device BlackSquare Enigma is a patented, USB hardware data encryption device. If you have data you need to protect, you should own an Enigma! Using BlackSquare Enigma, no one can decrypt your confidential data - EVER! Every so often, a truly compelling and innovative product comes along that disrupts traditional technology in a positive way. BlackSquare Technologies Enigma is one of these products. BlackSquare Enigma has the look and feel of a thumb drive, but it's NOT a thumb drive!

Do-Not-Track Movement Is Drawing Advertisers’ Fire Do Not Track mechanisms are features on browsers — like Mozilla’s Firefox — that give consumers the option of sending out digital signals asking companies to stop collecting information about their online activities for purposes of targeted advertising. First came a stern letter from nine members of the House of Representatives to the Federal Trade Commission, questioning its involvement with an international group called the World Wide Web Consortium, or W3C, which is trying to work out global standards for the don’t-track-me features. The legislators said they were concerned that these options for consumers might restrict “the flow of data at the heart of the Internet’s success.” Next came an incensed open letter from the board of the Association of National Advertisers to Steve Ballmer, the C.E.O. of , and two other company officials. “Microsoft’s action is wrong.

Blog Just one week left of the MediaGoblin campaign! Next Friday, the 18th of April, will be the last day of the campaign. There’s also never been clearer reason for why we need MediaGoblin (and the whole intersections of free culture and free software at that!) to succeed.