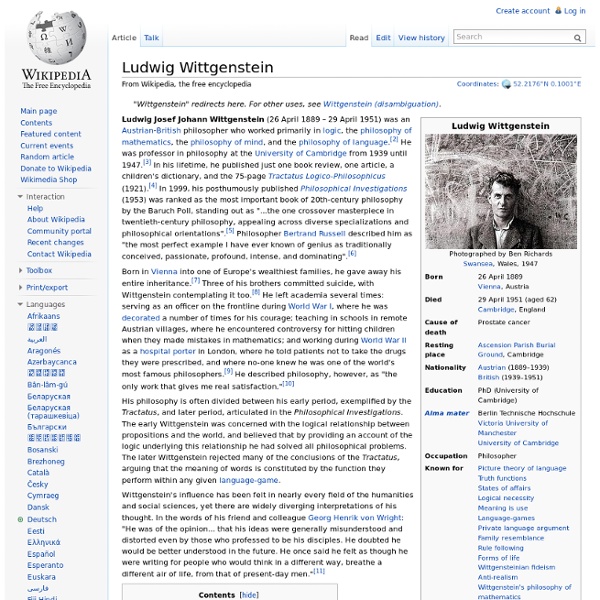 Ludwig Josef Johann Wittgenstein (26 April 1889 – 29 April 1951) was an Austrian-British philosopher who worked primarily in logic, the philosophy of mathematics, the philosophy of mind, and the philosophy of language.[4] From 1939–1947, Wittgenstein taught at the University of Cambridge.[5] During his lifetime he published just one slim book, the 75-page Tractatus Logico-Philosophicus (1921), one article, one book review and a children's dictionary.[6] His voluminous manuscripts were edited and published posthumously. Philosophical Investigations appeared as a book in 1953 and by the end of the century it was considered an important modern classic.[7] Philosopher Bertrand Russell described Wittgenstein as "the most perfect example I have ever known of genius as traditionally conceived; passionate, profound, intense, and dominating".[8] Born in Vienna into one of Europe's richest families, he inherited a large fortune from his father in 1913. Background[edit] The Wittgensteins[edit]

Eckhart Tolle Eckhart Tolle (/ˈɛkɑrt ˈtɒlə/ EK-art TO-lə; German pronunciation: [ˈɛkaʁt ˈtɔlə], born Ulrich Leonard Tolle on February 16, 1948) is a German-born resident of Canada,[1] best known as the author of The Power of Now and A New Earth. In 2011, he was listed by the Watkins Review as the most spiritually influential person in the world.[2] In 2008, a New York Times writer called Tolle "the most popular spiritual author in the United States".[3] Tolle has said that he was depressed for much of his life until he underwent, at age 29, an "inner transformation".

Tractatus Logico-Philosophicus The Tractatus Logico-Philosophicus (widely abbreviated and cited as TLP) (Latin for Logical Philosophical Treatise or Treatise on Logic and Philosophy) is the only book-length philosophical work by the Austrian philosopher Ludwig Wittgenstein that was published during his lifetime. The project had a broad goal: to identify the relationship between language and reality and to define the limits of science.[1] It is recognized by philosophers as a significant philosophical work of the twentieth century. G. E.

On Chomsky and the Two Cultures of Statistical Learning At the Brains, Minds, and Machines symposium held during MIT's 150th birthday party, Technology Review reports that Prof. Noam Chomsky derided researchers in machine learning who use purely statistical methods to produce behavior that mimics something in the world, but who don't try to understand the meaning of that behavior. The transcript is now available, so let's quote Chomsky himself: It's true there's been a lot of work on trying to apply statistical models to various linguistic problems. I think there have been some successes, but a lot of failures. Søren Kierkegaard Søren Aabye Kierkegaard (/ˈsɔrən ˈkɪərkəɡɑrd/ or /ˈkɪərkəɡɔr/; Danish: [ˈsɶːɐn ˈkiɐ̯ɡəɡɒːˀ] ( )) (5 May 1813 – 11 November 1855) was a Danish philosopher, theologian, poet, social critic, and religious author who is widely considered to be the first existentialist philosopher.[5] He wrote critical texts on organized religion, Christendom, morality, ethics, psychology and philosophy of religion, displaying a fondness for metaphor, irony and parables. Much of his philosophical work deals with the issues of how one lives as a "single individual", giving priority to concrete human reality over abstract thinking, and highlighting the importance of personal choice and commitment.[6] He was a fierce critic of idealist intellectuals and philosophers of his time, such as Swedenborg,[7] Hegel, Goethe, Fichte, Schelling, Schlegel, and Hans Christian Andersen. Early years (1813–1836)[edit]

Three Models of the Universe I once heard a recorded lecture by Alan Watts where he explained the two dominant Myths of Western culture involving the nature of the Universe. He then described a Chinese model of the Universe to contrast the other two. Here is a brief summary of each of the models… 1.) The Ceramic Model – The Universe as artifact. Generative grammar Early versions of Chomsky's theory were called transformational grammar, and this term is still used as a general term that includes his subsequent theories. There are a number of competing versions of generative grammar currently practiced within linguistics. Chomsky's current theory is known as the Minimalist program. Other prominent theories include or have included dependency grammar, head-driven phrase structure grammar, lexical functional grammar, categorial grammar, relational grammar, link grammar, and tree-adjoining grammar.[citation needed] Chomsky has argued that many of the properties of a generative grammar arise from an "innate" universal grammar.

Periya Puranam The Periya Puranam (Tamil:பெரிய‌ புராண‌ம்), that is, the great purana or epic, sometimes called Tiruttontarpuranam ("Tiru-Thondar-Puranam", the Purana of the Holy Devotees) is a Tamil poetic account depicting the legendary lives of the sixty-three Nayanars, the canonical poets of Tamil Shaivism. It was compiled during the 12th century by Sekkizhar. It provides evidence of trade with West Asia[1] The Periya Puranam is part of the corpus of Shaiva canonical works. Sekkizhar compiled and wrote the Periya Puranam or the Great Purana, (the life stories of the sixty-three Shaiva Nayanars, poets of the God Shiva) who composed the liturgical poems of the Tirumurai, and was later himself canonised and the work became part of the sacred canon.[2] Among all the hagiographic Puranas in Tamil, Sekkizhar's Tiruttondar Puranam or Periyapuranam, composed during the rule of Kullottonga Chola II (1133-1150) stands first.[3] Background[edit] Periyapuranam[edit]

Enantiodromia This principle was explicitly understood and discussed in the principles of traditional Chinese religion, as in Taoism and yin-yang. A central premise of the I Ching is that yang lines become yin when they have reached their extreme, and vice versa.[2] Overview[edit] The word "enantiodromia" was apparently coined by Stobaeus[3] but the concept is implied also in Heraclitus's writings. In fr. 126, for example, Heraclitus says "cold things warm, warm things cool, wet things dry and parched things get wet

Behaviorism Behaviorism (or behaviourism), is the science of behavior that focuses on observable behavior only,[1] it is also an approach to psychology that combines elements of philosophy, methodology, and theory.[2] It emerged in the early twentieth century as a reaction to "mentalistic" psychology, which often had difficulty making predictions that could be tested using rigorous experimental methods. The primary tenet of behaviorism, as expressed in the writings of John B. Watson, B. F. Skinner, and others, is that psychology should concern itself with the observable behavior of people and animals, not with unobservable events that take place in their minds.[3] The behaviorist school of thought maintains that behaviors as such can be described scientifically without recourse either to internal physiological events or to hypothetical constructs such as thoughts and beliefs.[4]