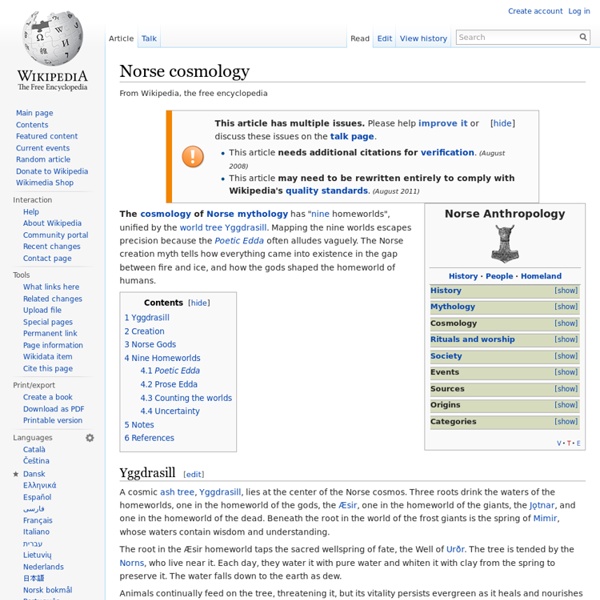 List of Germanic deities In Germanic paganism, the indigenous religion of the ancient Germanic peoples that inhabited Germanic Europe, there were a number of different gods and goddesses. Germanic deities are attested from numerous sources, including works of literature, various chronicles, runic inscriptions, personal names, place names, and other sources. This article presents a comprehensive list of these deities. Gods[edit] Goddesses[edit] See also[edit] Notes[edit] References[edit] Bellows, Henry Adams (Trans.) (1936).

Numbers in Norse mythology The numbers three and nine are significant numbers in Norse mythology and paganism. Both numbers (and multiplications thereof) appear throughout surviving attestations of Norse paganism, in both mythology and cultic practice.[1] While the number three appears significant in many cultures, Norse mythology appears to put special emphasis on the number nine. Along with the number 27, both numbers also figure into the lunar Germanic calendar.[1] Attestations[edit] Three[edit] The number three occurs with great frequency in grouping individuals and artifacts: Nine[edit] The number nine is also a significant number: Notes[edit] ^ Jump up to: a b Simek (2007:232-233).Jump up ^ This last being from Völuspá, who will "come from on high", is found only in the Hauksbók manuscript. References[edit] See also[edit]

Alternative Religion The Hedge Druid: Maps1 – England This is a gazeteer listing information about the sacred sites we have visited and mapped for subtle energies. This page covers the sites in England. Contents:- Arbor Low Location: Near the village of Parsley Hay, Derbyshire Peak District, Northern England. Arbor Low has been called the Stonehenge of the North probably on account of the amount of area it covers and the size of the stones that remain there, although today they are all laying flat. This site is one at which Kal feels particularly energised. Energetic condition : Every time we have visited and dowsed at this site it has been registering as a strong response, The rods swings forcefully, smoothly, directly and precisely here in response to questions. Recumbent stones at Arbor Low Energy types: The site is alive with all kinds of energetic paths and pools – strong neutral alignment leys, radials in abundance, male and female energies dancing up and down the surrounding mound, strong protective female energies atop the mound.

Irish mythology Bunworth Banshee The mythology of pre-Christian Ireland did not entirely survive the conversion to Christianity. However, much of it was preserved in medieval Irish literature, though it was shorn of its religious meanings. The sources[edit] The three main manuscript sources for Irish mythology are the late 11th/early 12th century Lebor na hUidre which is in the library of the Royal Irish Academy, the early 12th century Book of Leinster in the Library of Trinity College, Dublin, and the Rawlinson manuscript B 502 (Rawl.), housed in the Bodleian Library at Oxford University. Other important sources include a group of four manuscripts originating in the west of Ireland in the late 14th or early 15th century: The Yellow Book of Lecan, The Great Book of Lecan, The Book of Hy Many,[1] and The Book of Ballymote. When using these sources, it is, as always, important to question the impact of the circumstances in which they were produced. Mythological cycle[edit] Ulster cycle[edit]