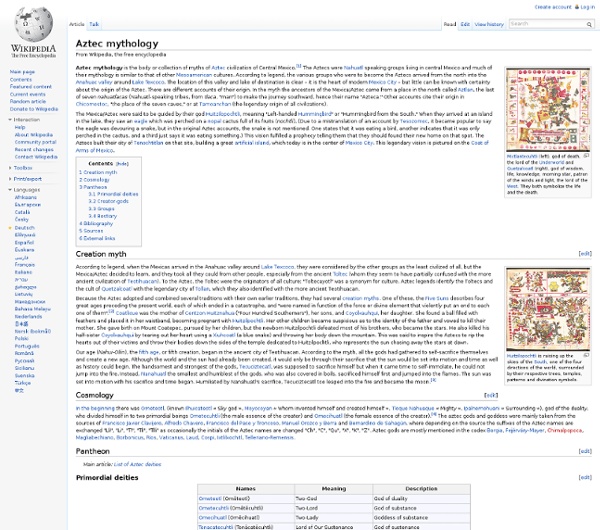 Mictlantecuhtli (left), god of death, the lord of the Underworld and Quetzalcoatl (right), god of wisdom, life, knowledge, morning star, patron of the winds and light, the lord of the West. Together they symbolize life and death. Aztec mythology is the body or collection of myths of Aztec civilization of Central Mexico.[1] The Aztecs were Nahuatl speaking groups living in central Mexico and much of their mythology is similar to that of other Mesoamerican cultures. The Mexica/Aztec were said to be guided by their god Huitzilopochtli, meaning "Left-handed Hummingbird" or "Hummingbird from the South." Creation myth[edit] Huitzilopochtli is raising up the skies of the South, one of the four directions of the world, surrounded by their respective trees, temples, patterns and divination symbols. Because the Aztec adopted and combined several traditions with their own earlier traditions, they had several creation myths. Pantheon[edit] Bibliography[edit] Grisel Gómez Cano (2011). Sources[edit] Related:  legend

Huitzilopochtli In Aztec religion, Huitzilopochtli (Classical Nahuatl: Huītzilopōchtli [wi:t͡siloˈpoːt͡ʃt͡ɬi]), is a Mesoamerican deity of war, sun, human sacrifice and the patron of the city of Tenochtitlan. He was also the national god of the Mexicas, also known as Aztecs, of Tenochtitlan. Many in the pantheon of deities of the Aztecs were inclined to have a fondness for a particular aspect of warfare. However, Huitzilopochtli was known as the primary god of war in ancient Mexico. Since he was the patron god of the Mexica, he was credited with both the victories and defeats that the Mexica people had on the battlefield.[1] It is important to remember that the defeat of their patron deity meant the defeat of his people. This is one of the many reasons why they were concerned with providing exquisite tribute and food for him. Etymology[edit] In the tlaxotecuyotl, a hymn sung in reverence to Huitzilopotchtli, he is referred to as: the Dart-Hurler, the divine hurler, and a terror to the Mixteca.[3]

Aztec mythology The Aztecs were a people who, through military alliances with other groups, dominated central and southern Mexico from the 14th to the 16th century. After the death of Montezuma II in 1520, the divisions and internal strife among the 38 tributary provinces and the fiercely independent peoples at the fringes of the Aztec Empire, made it easy for the Spanish conquistadors, led by Hernán Cortés, to defeat it in 1521. The name Aztec is derived from a mythical homeland to the north called Aztlán; the Aztecs also called themselves the Mexica. Their language belongs to the Nahuatlan branch of the Uto-Aztecan family. » Browse through the list of available articles in this area. Greek mythology Greek mythology is explicitly embodied in a large collection of narratives, and implicitly in Greek representational arts, such as vase-paintings and votive gifts. Greek myth attempts to explain the origins of the world, and details the lives and adventures of a wide variety of gods, goddesses, heroes, heroines, and mythological creatures. These accounts initially were disseminated in an oral-poetic tradition; today the Greek myths are known primarily from Greek literature. Archaeological findings provide a principal source of detail about Greek mythology, with gods and heroes featured prominently in the decoration of many artifacts. Sources Literary sources The poetry of the Hellenistic and Roman ages was primarily composed as a literary rather than cultic exercise. Finally, a number of Byzantine Greek writers provide important details of myth, much derived from earlier now lost Greek works. Archaeological sources Survey of mythic history Origins of the world and the gods

Nanauatzin In Aztec mythology, the god Nanahuatzin or Nanahuatl (or Nanauatzin, the suffix -tzin implies respect or familiarity; Classical Nahuatl: Nanāhuātzin [nanaːˈwaːtsin]), the most humble of the gods, sacrificed himself in fire so that he would continue to shine on Earth as the sun, thus becoming the sun god. Nanahuatzin means "full of sores." In the Codex Borgia, Nanahuatl is represented as a man emerging from a fire. This was originally interpreted as an illustration of cannibalism. Aztec tradition[edit] The Aztecs had various myths about the creation, and Nanahuatzin participates in several. In this legend, which is the basis for most Nanahuatl myths, there had been four creations. The gods decide that the fifth, and possibly last, sun must offer up his life as a sacrifice in fire. Nothing happens at first, but eventually two suns appear in the sky. Pipil tradition[edit] Sources[edit] Jump up ^ ANCIENT AMERICA, 9 = Ruud van Akkeren : Tzuywa : Place of the Gourd.

Aztec Creation Story How did the world begin? The Aztec creation story has its own answer - or you could say, answers, to that question. The five suns were the key to the rebirths of the world. The story of creation in ancient Mexico and surrounding areas actually changed as time went by. It was likely adapted by the Aztecs for their own political purposes, though even within the Aztec empire there were variations of the story. But basic components of the story had evolved over centuries and centuries, so we do see similarities between the Aztec's stories and the beliefs of earlier cultures. Rebirth The story of creation, according to the Aztecs, is actually a story of birth, death, and rebirth. But it's not a story of endless cycles, as you may see in other cultures. In the beginning was the void. The directions were very important to the Aztecs, since their great empire was believed to be at the very centre of the universe (remember what I mentioned about the Aztec creation story being political?).