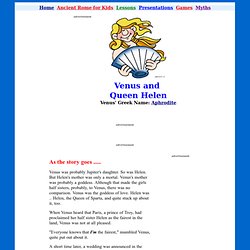 Venus was probably Jupiter's daughter. So was Helen. But Helen's mother was only a mortal. Venus's mother was probably a goddess. Although that made the girls half sisters, probably, to Venus, there was no comparison. When Venus heard that Paris, a prince of Troy, had proclaimed her half sister Helen as the fairest in the land, Venus was not at all pleased. "Everyone knows that I'm the fairest," mumbled Venus, quite put out about it. A short time later, a wedding was announced in the Roman god world. Juno, Venus, and Minerva all grabbed for the apple. Jupiter thundered, "Enough.

"Paris! " Venus made sure her bribe was the best. When the king heard his wife had been kidnapped, he called on the other city-states in ancient Greece to help him rescue her. Venus - Ancient Roman Gods for Kids. Some say Venus, the goddess of love, might have been one of the daughters of Jupiter, king of all the gods. 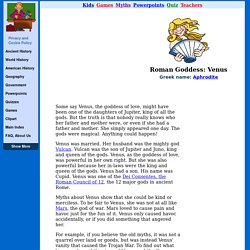 But the truth is that nobody really knows who her father and mother were, or even if she had a father and mother. She simply appeared one day. The gods were magical. Anything could happen! Venus was married. Myths about Venus show that she could be kind or merciless. For example, if you believe the old myths, it was not a quarrel over land or goods, but was instead Venus' vanity that caused the Trojan War. Mercury - Ancient Roman Gods for Kids. Jupiter was the king of all the gods. 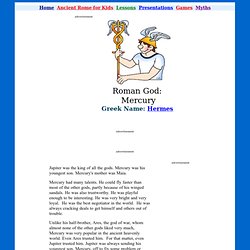 Mercury was his youngest son. Mercury's mother was Maia. Mercury had many talents. He could fly faster than most of the other gods, partly because of his winged sandals. Mars - Ancient Roman God of War for Kids. Mars was the son of Jupiter and Juno, the king and queen of all the gods. 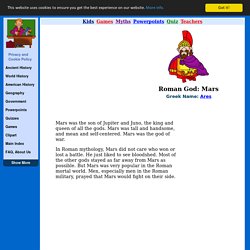 Mars was tall and handsome, and mean and self-centered. Mars was the god of war. In Roman mythology, Mars did not care who won or lost a battle. He just liked to see bloodshed. Most of the other gods stayed as far away from Mars as possible. Pluto - Ancient Roman Gods for Kids. Pluto and Jupiter and Neptune were three very powerful gods. 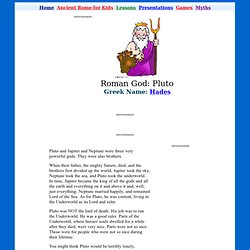 They were also brothers. Ceres and her daughter - Ancient Myth for Kids. Jupiter, the king of all the Roman gods, had three sisters. 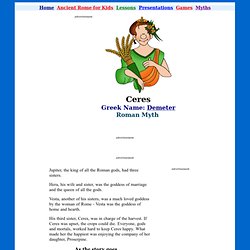 Hera, his wife and sister, was the goddess of marriage and the queen of all the gods. Vesta, another of his sisters, was a much loved goddess by the woman of Rome - Vesta was the goddess of home and hearth. His third sister, Ceres, was in charge of the harvest. If Ceres was upset, the crops could die. Everyone, gods and mortals, worked hard to keep Ceres happy. As the story goes .... Proserpine had grown into a beautiful young woman. Locked in a room in the Underworld, Proserpine cried and cried. Nearly a week went by. Neptune - Ancient Roman Gods for Kids. Neptune was the Lord of the Sea. 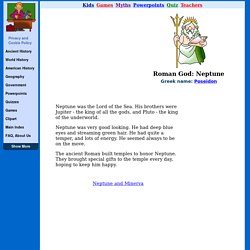 His brothers were Jupiter - the king of all the gods, and Pluto - the king of the underworld. Neptune was very good looking. He had deep blue eyes and streaming green hair. He had quite a temper, and lots of energy. He seemed always to be on the move. The ancient Roman built temples to honor Neptune. Explore Ancient Rome Neptune and Minerva. Jupiter - Ancient Roman Gods for Kids. The Romans loved to tell stories about the magical family who ruled the heavens. 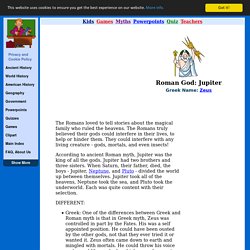 The Romans truly believed that their gods could interfere in their lives, to help or hinder them. According to ancient Roman myth, Jupiter was the king of all the gods. Jupiter had two brothers and three sisters. When Saturn, their father, died, the boys - Jupiter, Neptune, andPluto - divided the world up between themselves. Jupiter took all of the heavens, Neptune took the sea, and Pluto took the underworld. DIFFERENT: One of the differences between Greek and Roman myth is that in Greek myth, Zeus was controlled in part by the Fates. SIMILAR: The Greek and Roman god (Zeus/Jupiter) also have similarities. Explore Ancient Rome Ancient Roman Gods & Goddesses Roman Games Roman Myths Roman Video Clips Roman Presentations Ancient Rome for Kids.