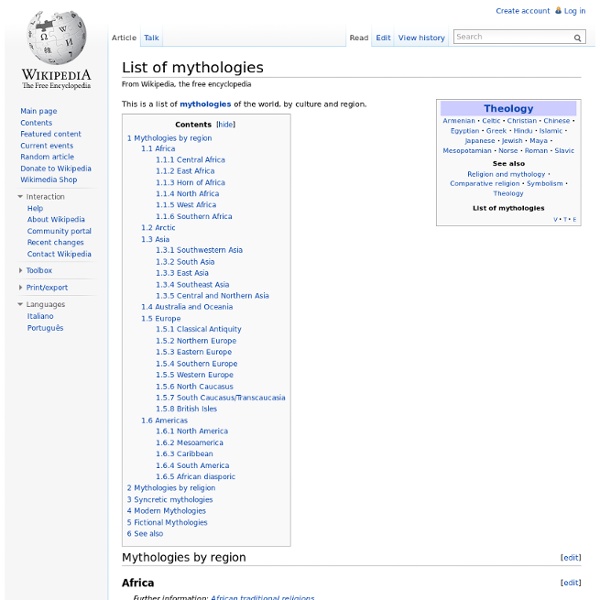 Internet Sacred Text Archive Home Moai Moai facing inland at Ahu Tongariki, restored by Chilean archaeologist Claudio Cristino in the 1990s Moai i/ˈmoʊ.aɪ/, or mo‘ai, are monolithic human figures carved by the Rapa Nui people from rock on the Chilean Polynesian island of Easter Island between the years 1250 and 1500.[1] Nearly half are still at Rano Raraku, the main moai quarry, but hundreds were transported from there and set on stone platforms called ahu around the island's perimeter. Almost all moai have overly large heads three-eighths the size of the whole statue. The moai are chiefly the living faces (aringa ora) of deified ancestors (aringa ora ata tepuna).[2] The statues still gazed inland across their clan lands when Europeans first visited the island, but most were cast down during later conflicts between clans. Description[edit] The moai are monolithic statues, their minimalist style related to forms found throughout Polynesia. Six of the fifteen moai at Ahu Tongariki Characteristics[edit] Eyes[edit] Symbolism[edit] Dr.

TAKENOUCHI DOCUMENTS - HIDDEN HISTORY OF MANKIND AND EARTH - Book II Preface Revival of Divine theocracy is the key to the actualization of 'the Age of Miroku' The seal has finally been broken to reveal the history of the earth which was once ruled by the Sumera-Mikoto Book I was the result of 24 years of research on the Takenouchi Documents and it received a far better response than I expected. Book II is now being published. It is an unexpected joy because I spent half a century of research on ultra ancient history. The time of heaven has come! In Book I, I advocated that people should study the Takenouchi Documents in search for a solution to the deadlock of modern civilization, which will lead humankind to true happiness. This book tells you of the future revival of theocracy in more detail, which is the wish of gods. The date in which the original documents were written is still unknown. Sacred treasures handed down by the Takenouchi family, along with ancient documents, are unlike other sacred treasures of the world. We may be given only a little time.

Aztec mythology Mictlantecuhtli (left), god of death, the lord of the Underworld and Quetzalcoatl (right), god of wisdom, life, knowledge, morning star, patron of the winds and light, the lord of the West. Together they symbolize life and death. Aztec mythology is the body or collection of myths of Aztec civilization of Central Mexico.[1] The Aztecs were Nahuatl speaking groups living in central Mexico and much of their mythology is similar to that of other Mesoamerican cultures. According to legend, the various groups who were to become the Aztecs arrived from the north into the Anahuac valley around Lake Texcoco. The location of this valley and lake of destination is clear – it is the heart of modern Mexico City – but little can be known with certainty about the origin of the Aztec. The Mexica/Aztec were said to be guided by their god Huitzilopochtli, meaning "Left-handed Hummingbird" or "Hummingbird from the South." Creation myth[edit] Pantheon[edit] Bibliography[edit] Grisel Gómez Cano (2011).

Family tree of the Greek gods Key: The essential Olympians' names are given in bold font. See also List of Greek mythological figures Notes External links Media related to Family trees of Greek mythology at Wikimedia Commons Roman mythology Roman mythology is the body of traditional stories pertaining to ancient Rome's legendary origins and religious system, as represented in the literature and visual arts of the Romans. "Roman mythology" may also refer to the modern study of these representations, and to the subject matter as represented in the literature and art of other cultures in any period. The Romans usually treated their traditional narratives as historical, even when these have miraculous or supernatural elements. The stories are often concerned with politics and morality, and how an individual's personal integrity relates to his or her responsibility to the community or Roman state. The study of Roman religion and myth is complicated by the early influence of Greek religion on the Italian peninsula during Rome's protohistory, and by the later artistic imitation of Greek literary models by Roman authors. The nature of Roman myth[edit] Founding myths[edit] Other myths[edit] Religion and myth[edit] Foreign gods[edit]

Traditions and Hearthside Stories of West Cornwall, Vol. 1: Legends of the West-Country Giants: The Giants of Towednack Traditions and Hearthside Stories of West Cornwall, Vol. 1, by William Bottrell, [1870], at sacred-texts.com p. 9 The Giants of Towednack "Of Titan's monstrous race Only some few disturb’d that happy place. Raw hides they wore for clothes, their drink was blood, Rocks were their dining-rooms, their prey their food, Caverns their lodging, and their bed their grove, Their cups some hollow trunk." Ancient traditions tell us that, long before monks or saints set foot in Cornwall, a mighty race of Titans dwelt in our hills, woods, and carns, who were anciently the masters of the world and the ancestors of the true Celtic race, and who, as they exceeded all other people in health and strength of body, were looked upon as giants. When Tom was a young man he was always going about with his hands in his pockets, and never cared for doing much except rolling the big rocks from over the fields into the hedges for grounders. The brewer told Tom that he wanted to send a load of beer over to St. p. 10

Native American mythology Coyote and Opossum appear in the stories of a number of tribes. The mythologies of the indigenous peoples of North America comprise many bodies of traditional narratives associated with religion from a mythographical perspective. Indigenous North American belief systems include many sacred narratives. Such spiritual stories are deeply based in Nature and are rich with the symbolism of seasons, weather, plants, animals, earth, water, sky and fire. The principle of an all embracing, universal and omniscient Great Spirit, a connection to the Earth, diverse creation narratives and collective memories of ancient ancestors are common. Algonquian (northeastern US, Great Lakes)[edit] Plains Natives[edit] Blackfoot mythology – A North American tribe who currently live in Montana. Muskogean (southern US) and Iroquois (Eastern US)[edit] Alaska and Canada[edit] Pacific Northwest[edit] Uto-Aztecan (Great Basin to Mexico)[edit] Other southwestern US[edit] Central America[edit] South America[edit] Colin F.