The Greek Stage and Shakespeare. The following article was originally printed in Greek Genius and Other Essays. 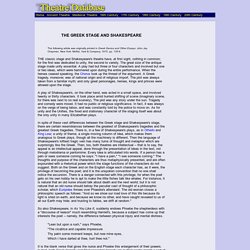 John Jay Chapman. New York: Moffat, Yard & Company, 1915. pp. 135-9. THE classic stage and Shakespeare's theatre have, at first sight, nothing in common; for the first was dedicated to unity, the second to variety. The great size of the antique stage made unity essential. A play had but three or four characters and involved but one or two ideas, which were hammered upon during the entire performance. A play of Shakespeare's, on the other hand, was acted in a small space, and involved twenty or thirty characters. In spite of these vast differences between the Greek stage and Shakespeare's stage, there are certain resemblances between the greatest of Shakespeare's tragedies and the greatest Greek tragedies.

"Lean but upon a rush," says Phoebe, "The cicatrice and capable impressure Thy palm some moment keeps, but now mine eyes, Which I have darted at thee, hurt thee not. " Back to William Shakespeare. Ancient Greece - History, mythology, art, war, culture, society, and architecture.

Epidaurus. Located on the fertile Argolid plain of the east Peloponnese in Greece and blessed with a mild climate and natural springs, the sanctuary of Asclepius at Epidaurus was an important sacred centre in both ancient Greek and Roman times. 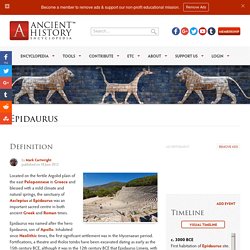 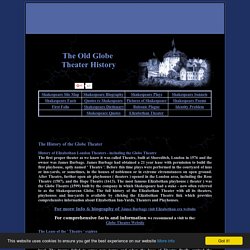 The profits of the Bear Garden slumped and in 1614 Henslowe and Edward Alleyn (the most famous actor in Elizabethan England ) had it demolished and replaced with a new playhouse which they called The Hope Theatre (aptly named!). Edward Alleyn returned to the stage in an attempt to lure the crowds from The Globe Theatre. 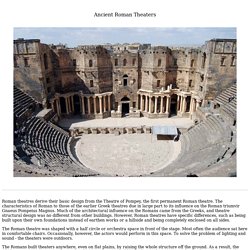 The characteristics of Roman to those of the earlier Greek theatres due in large part to its influence on the Roman triumvir Gnaeus Pompeius Magnus. Much of the architectural influence on the Romans came from the Greeks, and theatre structural design was no different from other buildings. However, Roman theatres have specific differences, such as being built upon their own foundations instead of earthen works or a hillside and being completely enclosed on all sides.

Ancient Greek Theater and the Monumental Amphitheaters in Honor of Dionysus. To the Ancient Greeks, theater was a form of entertainment taken very seriously. 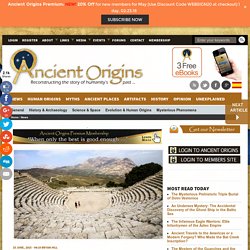 People would come from all across the Greek world to attend the popular theaters held in open air amphitheaters. In their glory days, some amphitheaters could hold crowds of up to 15,000 people, and some were so acoustically precise that a coin dropped at the center of the performance circle could be heard perfectly in the back row. Greek Theatre - Ancient Greece. The Greek theatre history began with festivals honoring their gods. 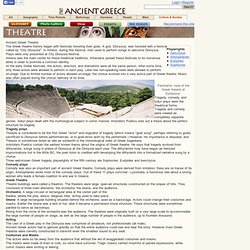 A god, Dionysus, was honored with a festival called by "City Dionysia". In Athens, during this festival, men used to perform songs to welcome Dionysus. Plays were only presented at City Dionysia festival. Athens was the main center for these theatrical traditions. Athenians spread these festivals to its numerous allies in order to promote a common identity. CLIO History Journal - The Roman Theatre. Ursula Cliff, Dickson College 2009 Ursula Cliff received Clio's 2009 ANU Prize for The Best Essay in Ancient History for 'The Roman Theatre.' The award was judged by Dr Paul Burton of the ANU. 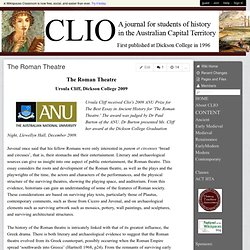 Dr Burton presented Ms. Cliff her award at the Dickson College Graduation Night, Llewellyn Hall, December 2009. Juvenal once said that his fellow Romans were only interested in panem et circenses ‘bread and circuses’, that is, their stomachs and their entertainment. Do you notice how there is nothing he does which falls short of perfection, or fails to enchant? Surviving archaeological evidence suggests that women actors were never a part of later Roman theatre —instead their parts are played by men. ‘The scaena [scenes or backdrop] itself displays the following scheme. Roman Theatre, Pantomime - Ancient Rome for Kids. The Romans loved all forms of entertainment. 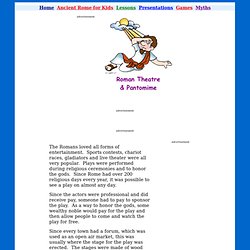 Sports contests, chariot races, gladiators and live theater were all very popular. Plays were performed during religious ceremonies and to honor the gods. Since Rome had over 200 religious days every year, it was possible to see a play on almost any day. Since the actors were professional and did receive pay, someone had to pay to sponsor the play. As a way to honor the gods, some wealthy noble would pay for the play and then allow people to come and watch the play for free. Since every town had a forum, which was used as an open air market, this was usually where the stage for the play was erected. The actors were always men; there were no female actresses. Much of this was done because the ancient Romans felt free to talk out loud during a play. The audience would also voice their displeasure if they did not like the play.