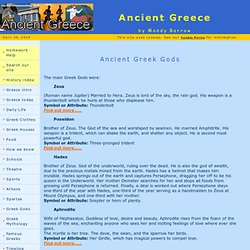 Zeus is lord of the sky, the rain god. His weapon is a thunderbolt which he hurls at those who displease him. Symbol or Attribute: Thunderbolt Find out more..... Ancient Greece - Gods and Goddesses - The British Museum.