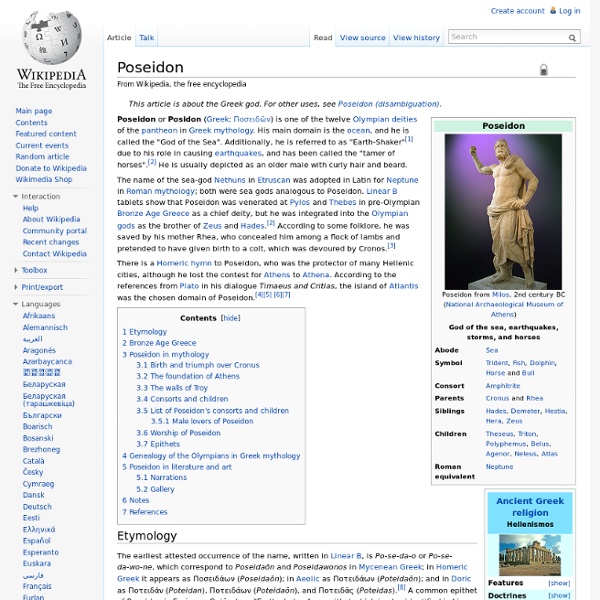 There is a Homeric hymn to Poseidon, who was the protector of many Hellenic cities, although he lost the contest for Athens to Athena. According to the references from Plato in his dialogue Timaeus and Critias, the island of Atlantis was the chosen domain of Poseidon.[4][5][6][7] Etymology The earliest attested occurrence of the name, written in Linear B, is 𐀡𐀮𐀆𐀃 Po-se-da-o or 𐀡𐀮𐀆𐀺𐀚 Po-se-da-wo-ne, which correspond to Poseidaōn and Poseidawonos in Mycenean Greek; in Homeric Greek it appears as Ποσειδάων (Poseidaōn); in Aeolic as Ποτειδάων (Poteidaōn); and in Doric as Ποτειδάν (Poteidan), Ποτειδάων (Poteidaōn), and Ποτειδᾶς (Poteidas).[8] A common epithet of Poseidon is Γαιήοχος Gaiēochos, "Earth-shaker," an epithet which is also identified in Linear B tablets. The origins of the name "Poseidon" are unclear. Bronze Age Greece Poseidon, Paella Museum Poseidon carries frequently the title wa-na-ka ( wanax) in Linear B inscriptions, as king of the underworld. Poseidon in mythology

OTHER GODS The most enduring of H.P. Lovecraft's literary characters, Cthulhu first appeared in Weird Tales in 1928. Great Old Ones[edit] An ongoing theme in Lovecraft's work is the complete irrelevance of mankind in the face of the cosmic horrors that apparently exist in the universe, with Lovecraft constantly referring to the "Great Old Ones": a loose pantheon of ancient, powerful deities from space who once ruled the Earth and who have since fallen into a deathlike sleep.[3] Lovecraft named several of these deities, including Azathoth, Cthulhu, Ghatanothoa, Shub-Niggurath, Yog-Sothoth, Nyarlathotep and Yig. Table of Great Old Ones[edit] This table is organized as follows: In Joseph S. Outer Gods[edit] The Outer Gods are ruled by Azathoth, the "Blind Idiot God", who holds court at the center of the universe. List of Outer Gods[edit] Abhoth[edit] See Clark Ashton Smith deities. Aiueb Gnshal[edit] Azathoth[edit] See Azathoth. Azhorra-Tha[edit] The Blackness from the Stars[edit] The Cloud-Thing[edit]

Pan (god) In Greek religion and mythology, Pan (/ˈpæn/;[1] Ancient Greek: Πᾶν, Pān) is the god of the wild, shepherds and flocks, nature of mountain wilds, hunting and rustic music, and companion of the nymphs.[2] His name originates within the Ancient Greek language, from the word paein (πάειν), meaning "to pasture."[3] He has the hindquarters, legs, and horns of a goat, in the same manner as a faun or satyr. The Roman Faunus, a god of Indo-European origin, was equated with Pan. The worship of Pan began in Arcadia which was always the principal seat of his worship. Representations of Pan on 4th century BC gold and silver Pantikapaion coins One of the famous myths of Pan involves the origin of his pan flute, fashioned from lengths of hollow reed. Disturbed in his secluded afternoon naps, Pan's angry shout inspired panic (panikon deima) in lonely places.[17][18] Following the Titans' assault on Olympus, Pan claimed credit for the victory of the gods because he had frightened the attackers.

Zeus Name The Chariot of Zeus, from an 1879 Stories from the Greek Tragedians by Alfred Church. The god's name in the nominative is Ζεύς Zeús /zdeús/. It is inflected as follows: vocative: Ζεῦ / Zeû; accusative: Δία / Día; genitive: Διός / Diós; dative: Διί / Dií. Diogenes Laertius quotes Pherecydes of Syros as spelling the name, Ζάς.[10] The earliest attested forms of the name are the Mycenaean Greek 𐀇𐀸, di-we and 𐀇𐀺, di-wo, written in the Linear B syllabic script.[14] Zeus in myth Zeus, at the Getty Villa, A.D. 1 - 100 by unknown. Birth When Zeus was about to be born, Rhea sought Gaia to devise a plan to save him, so that Cronus would get his retribution for his acts against Uranus and his own children. Infancy Rhea hid Zeus in a cave on Mount Ida in Crete. King of the gods Zeus and Hera Consorts and children 2The Charites/Graces were usually considered the daughters of Zeus and Eurynome but they were also said to be daughters of Dionysus and Aphrodite or of Helios and the naiad Aegle.

Irish Soma Many scholars believe that the Indo-Europeans used an entheogenic or psychedelic drug in their rituals -- called soma amongst the Vedic people of India, and haoma in Iran. The ancient Greeks also used an ergot-based preparation in wine as the entheogenic trigger of the Eleusinian Mysteries. Soma has been identified as amanita muscaria or the fly agaric mushroom; haoma may have been the same, or it might be "wild rue," a harmaline-containing shrub (see Bibliography under Flattery and Schwartz). I consider it strange that in all the writing I've read about psychedelics, and about Ireland, not one text has connected the two subjects. Irish myths and legends were not written down till the Christian era, and then only by monks who might well have misunderstood or even censored any references to a soma-type substance or cult. The Irish material abounds in references to magical substances which bestow knowledge and/or pleasure when ingested. In this version the tale ends happily. St.