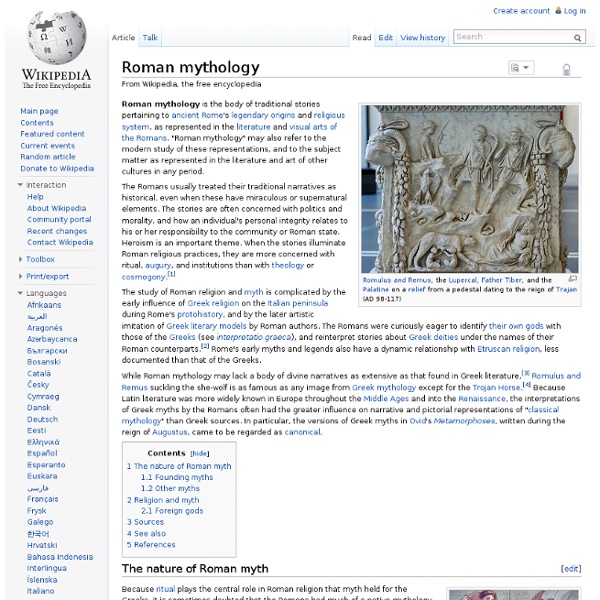 Roman mythology is the body of traditional stories pertaining to ancient Rome's legendary origins and religious system, as represented in the literature and visual arts of the Romans. "Roman mythology" may also refer to the modern study of these representations, and to the subject matter as represented in the literature and art of other cultures in any period. The Romans usually treated their traditional narratives as historical, even when these have miraculous or supernatural elements. The stories are often concerned with politics and morality, and how an individual's personal integrity relates to his or her responsibility to the community or Roman state. Heroism is an important theme. When the stories illuminate Roman religious practices, they are more concerned with ritual, augury, and institutions than with theology or cosmogony.[1] The nature of Roman myth[edit] Founding myths[edit] Other myths[edit] Mucius Scaevola in the Presence of Lars Porsenna (early 1640s) by Matthias Stom

Greek mythology Greek mythology is explicitly embodied in a large collection of narratives, and implicitly in Greek representational arts, such as vase-paintings and votive gifts. Greek myth attempts to explain the origins of the world, and details the lives and adventures of a wide variety of gods, goddesses, heroes, heroines, and mythological creatures. These accounts initially were disseminated in an oral-poetic tradition; today the Greek myths are known primarily from Greek literature. Archaeological findings provide a principal source of detail about Greek mythology, with gods and heroes featured prominently in the decoration of many artifacts. Sources Literary sources The poetry of the Hellenistic and Roman ages was primarily composed as a literary rather than cultic exercise. Finally, a number of Byzantine Greek writers provide important details of myth, much derived from earlier now lost Greek works. Archaeological sources Survey of mythic history Origins of the world and the gods

Facts and Figures: All Things Roman In the area of west central Italy was a region known as Latium (modern Lazio). The people of Latium were known as the Latins, an ancient tribe that lived in a region on the south side of the River Tiber, with the Etruscans living on the other side of the river, known as Etruria (modern Tuscany). Their southeastern neighbour was the region of Campania, with some cities such as Cumae, was founded and colonised by the Greeks. Within Latium was the city of Rome. The Latins spoke an Italic language, known as Latin, a language that the Romans had adopted. The Italic language is a subfamily to the Indo-European language, confined to the regions in Italy. Etruscan language is not an Italic language; in fact, the Etruscan language is a unique, but extinct language, which doesn't even belong to the Indo-European language family. The Etruscan alphabets had been derived from the Greek, who derived it from the Semitic (Phoenician) alphabets (see the Greek Alphabets).

Trojan War Sources The Burning of Troy (1759/62), oil painting by Johann Georg Trautmann The events of the Trojan War are found in many works of Greek literature and depicted in numerous works of Greek art. There is no single, authoritative text which tells the entire events of the war. Other parts of the Trojan War were told in the poems of the Epic Cycle, also known as the Cyclic Epics: the Cypria, Aethiopis, Little Iliad, Iliou Persis, Nostoi, and Telegony. In later ages playwrights, historians, and other intellectuals would create works inspired by the Trojan War. Legend The following summary of the Trojan War follows the order of events as given in Proclus' summary, along with the Iliad, Odyssey, and Aeneid, supplemented with details drawn from other authors. Origins of the war The plan of Zeus The Judgement of Paris Zeus came to learn from either Themis[12] or Prometheus, after Heracles had released him from Caucasus,[13] that, like his father Cronus, one of his sons would overthrow him.

Greek and Roman Gods As of July 1, 2013 ThinkQuest has been discontinued. We would like to thank everyone for being a part of the ThinkQuest global community: Students - For your limitless creativity and innovation, which inspires us all. Teachers - For your passion in guiding students on their quest. Partners - For your unwavering support and evangelism. Parents - For supporting the use of technology not only as an instrument of learning, but as a means of creating knowledge. We encourage everyone to continue to “Think, Create and Collaborate,” unleashing the power of technology to teach, share, and inspire. Best wishes, The Oracle Education Foundation

Iliad The Iliad (sometimes referred to as the Song of Ilion or Song of Ilium) is an ancient Greek epic poem in dactylic hexameter, traditionally attributed to Homer. Set during the Trojan War, the ten-year siege of the city of Troy (Ilium) by a coalition of Greek states, it tells of the battles and events during the weeks of a quarrel between King Agamemnon and the warrior Achilles. Although the story covers only a few weeks in the final year of the war, the Iliad mentions or alludes to many of the Greek legends about the siege; the earlier events, such as the gathering of warriors for the siege, the cause of the war, and related concerns tend to appear near the beginning. Then the epic narrative takes up events prophesied for the future, such as Achilles' looming death and the sack of Troy, prefigured and alluded to more and more vividly, so that when it reaches an end, the poem has told a more or less complete tale of the Trojan War. Synopsis[edit] The first verses of the Iliad Achaeans[edit]

Chinese mythology Chinese mythology refers to those myths found in the historical geographic area of China: these include myths in Chinese and other languages, as transmitted by Han Chinese as well as other ethnic groups (of which fifty-six are officially recognized by the current administration of China).[1] Chinese mythology includes creation myths and legends, such as myths concerning the founding of Chinese culture and the Chinese state. As in many cultures' mythologies, Chinese mythology has in the past been believed to be, at least in part, a factual recording of history. Thus, in the study of historical Chinese culture, many of the stories that have been told regarding characters and events which have been written or told of the distant past have a double tradition: one which presents a more historicized and one which presents a more mythological version.[2] Historians have written evidence of Chinese mythological symbolism from the 12th century BC in the Oracle bone script. Major concepts[edit]

King Midas and his golden touch - Greeka.com The story of King Midas is a myth about the tragedy of avarice and narrates what happens when true happiness is not recognized. Midas was a man who wished that everything he touched would turn into gold. However, he had not thought that this wish was not actually a blessing, but a curse. The wish Midas was a king of great fortune who ruled the country of Phrygia, in Asia Minor. One day, Dionyssus, the god of wine and revelry, passed through the kingdom of Midas. The curse The next day, Midas, woke up eager to see if his wish would become true. Without even thinking, he ate a grape but it also turned into gold! The atonement The god heard Midas and felt sorry for him. Midas hugged his daughter in full happiness and decided to share his great fortune with his people.

Aztec mythology Mictlantecuhtli (left), god of death, the lord of the Underworld and Quetzalcoatl (right), god of wisdom, life, knowledge, morning star, patron of the winds and light, the lord of the West. Together they symbolize life and death. Aztec mythology is the body or collection of myths of Aztec civilization of Central Mexico.[1] The Aztecs were Nahuatl speaking groups living in central Mexico and much of their mythology is similar to that of other Mesoamerican cultures. The Mexica/Aztec were said to be guided by their god Huitzilopochtli, meaning "Left-handed Hummingbird" or "Hummingbird from the South." Creation myth[edit] Huitzilopochtli is raising up the skies of the South, one of the four directions of the world, surrounded by their respective trees, temples, patterns and divination symbols. Because the Aztec adopted and combined several traditions with their own earlier traditions, they had several creation myths. Pantheon[edit] Bibliography[edit] Grisel Gómez Cano (2011). Sources[edit]