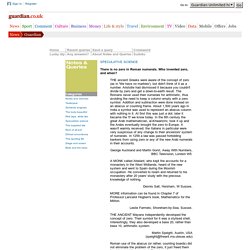 Who invented zero, and when? THE ancient Greeks were aware of the concept of zero (as in 'We have no marbles'), but didn't think of it as a number. Aristotle had dismissed it because you couldn't divide by zero and get a down-to-earth result. The Romans never used their numerals for arithmetic, thus avoiding the need to keep a column empty with a zero symbol. Ask Dr. Math. Roman Numerals: The Epic Guide. How to Read Roman Numerals.