The Roman Empire, explained in 40 maps. TwoTwo thousand years ago, on August 19, 14 AD, Caesar Augustus died. He was Rome’s first emperor, having won a civil war more than 40 years earlier that transformed the dysfunctional Roman Republic into an empire. Under Augustus and his successors, the empire experienced 200 years of relative peace and prosperity. Here are 40 maps that explain the Roman Empire — its rise and fall, its culture and economy, and how it laid the foundations of the modern world. 1) The rise and fall of Rome In 500 BC, Rome was a minor city-state on the Italian peninsula. 2) The Roman Empire was vast At its height around 100 AD, the Roman Empire stretched from Britain in the Northwest to Egypt in the Southeast. 3) Traveling around the empire was excruciatingly slow This map provides some perspective on just how big Roman territory was relative to the transportation technologies of the day.

Julius Caesar. Gaius Julius Caesar was born on 12 July 100 BC in Rome, son of Gaius Caesar and Aurelia. Governor of Gaul 58-49 BC. Appointed dictator for ten years in 47 B, for life on 14 February 44 BC. Married initially to Cornelia (one daughter, Julia), then to Pompeia, alas to Calpurnia. Assassinated on 15 March 44 BC. Deified in 42 BC. Caesar was tall, fair-haired, well built and of sound health. though he did suffer from the occasional epileptic fit. Caesar grew up in a period of unrest and civil war in Rome. Ariovistus. History[edit] Sources[edit] Ariovistus and the events he was part of are known from Caesar's Commentarii de Bello Gallico.[1] Caesar, as a participant in the events, is a primary source, although as his Commentaries were in part political propaganda they may be suspected of being self-serving. 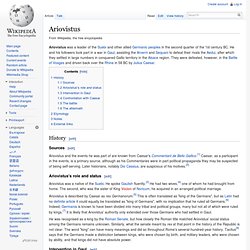 Later historians, notably Dio Cassius, are suspicious of his motives.[2] Ariovistus's role and status[edit] Ariovistus was a native of the Suebi. He was recognised as a king by the Roman Senate, but how closely the Roman title matched Ariovistus' social status among the Germans remains unknown. Intervention in Gaul[edit] Some time before Caesar's governorship of Gaul (which began in 58 BC), the Gaulish Arverni and Sequani enlisted Ariovistus's aid in their war against the Aedui.

List of Roman legions. This is a list of Roman legions, including key facts about each legion, primarily focusing on Principate (early Empire, 27 BC - 284 AD) legions, for which there exists substantial literary, epigraphic and archaeological evidence. 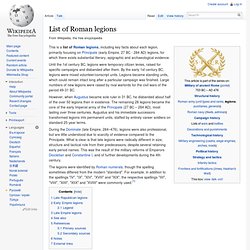 However, when Augustus became sole ruler in 31 BC, he disbanded about half of the over 50 legions then in existence. During the Dominate (late Empire, 284–476), legions were also professional, but are little understood due to scarcity of evidence compared to the Principate. Late Republican legions[edit] Early Empire legions[edit] Code for Roman provinces in the table: Aquila (Roman) A modern reconstruction of an aquila An aquila, or eagle, was a prominent symbol used in ancient Rome, especially as the standard of a Roman legion. 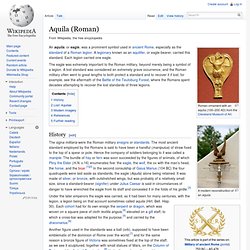 A legionary known as an aquilifer, or eagle-bearer, carried this standard. Each legion carried one eagle. Misogyny. Misogyny /mɪˈsɒdʒɪni/ is the hatred or dislike of women or girls. 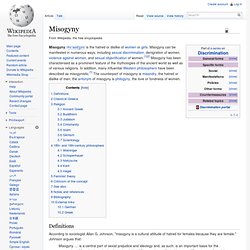 Misogyny can be manifested in numerous ways, including sexual discrimination, denigration of women, violence against women, and sexual objectification of women.[1][2] Misogyny has been characterised as a prominent feature of the mythologies of the ancient world as well as of various religions. In addition, many influential Western philosophers have been described as misogynistic.[1] The counterpart of misogyny is misandry, the hatred or dislike of men; the antonym of misogyny is philogyny, the love or fondness of women. Definitions According to sociologist Allan G. Johnson, "misogyny is a cultural attitude of hatred for females because they are female. " Misogyny .... is a central part of sexist prejudice and ideology and, as such, is an important basis for the oppression of females in male-dominated societies.

Achilles. In Greek mythology, Achilles (/əˈkɪliːz/; Ancient Greek: Ἀχιλλεύς, Akhilleus, pronounced [akʰillěws]) was a Greek hero of the Trojan War and the central character and greatest warrior of Homer's Iliad. 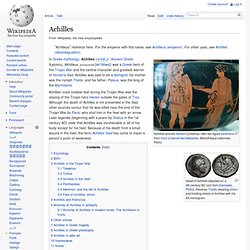 Achilles was said to be a demigod; his mother was the nymph Thetis, and his father, Peleus, was the king of the Myrmidons. Etymology[edit] Achilles' name can be analyzed as a combination of ἄχος (akhos) "grief" and λαός (Laos) "a people, tribe, nation, etc. "