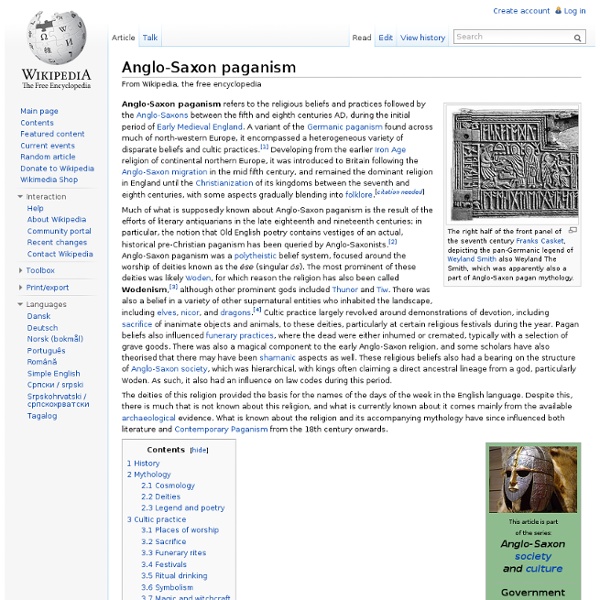 Anglo-Saxon paganism refers to the religious beliefs and practices followed by the Anglo-Saxons between the fifth and eighth centuries AD, during the initial period of Early Medieval England. A variant of the Germanic paganism found across much of north-western Europe, it encompassed a heterogeneous variety of disparate beliefs and cultic practices.[1] Developing from the earlier Iron Age religion of continental northern Europe, it was introduced to Britain following the Anglo-Saxon migration in the mid fifth century, and remained the dominant religion in England until the Christianization of its kingdoms between the seventh and eighth centuries, with some aspects gradually blending into folklore.[citation needed] The right half of the front panel of the seventh century Franks Casket, depicting the pan-Germanic legend of Weyland Smith also Weyland The Smith, which was apparently also a part of Anglo-Saxon pagan mythology. History[edit] Mythology[edit] Cosmology[edit] Deities[edit]

Rapa Nui mythology The Rapa Nui mythology, also known as Pascuense mythology or Easter Island mythology, is the name given to the myths, legends and beliefs (before being converted to Christianity) of the native Rapanui people of the island of Rapa Nui (Easter Island), located in the south eastern Pacific Ocean, almost 4,000 kilometres (2,500 mi) from continental Chile. The myth of origin[edit] According to Rapa Nui mythology Hotu Matu'a was the legendary first settler and ariki mau ("supreme chief" or "king") of Easter Island.[1] Hotu Matu'a and his two canoe (or one double hulled canoe) colonising party were Polynesians from the now unknown land of Hiva (probably the Marquesas). Ancestor Cult[edit] The most visible element in the culture was the production of massive statues called moai that represented deified ancestors. The Birdman Cult[edit] Myths of Rapa Nui[edit] References[edit] Further reading[edit] Kjellgren, Eric, et al. (2001).

Native American mythology Coyote and Opossum appear in the stories of a number of tribes. The mythologies of the indigenous peoples of North America comprise many bodies of traditional narratives associated with religion from a mythographical perspective. Indigenous North American belief systems include many sacred narratives. Such spiritual stories are deeply based in Nature and are rich with the symbolism of seasons, weather, plants, animals, earth, water, sky and fire. The principle of an all embracing, universal and omniscient Great Spirit, a connection to the Earth, diverse creation narratives and collective memories of ancient ancestors are common. Algonquian (northeastern US, Great Lakes)[edit] Plains Natives[edit] Blackfoot mythology – A North American tribe who currently live in Montana. Muskogean (southern US) and Iroquois (Eastern US)[edit] Alaska and Canada[edit] Pacific Northwest[edit] Uto-Aztecan (Great Basin to Mexico)[edit] Other southwestern US[edit] Central America[edit] South America[edit] Colin F.

Moai Moai facing inland at Ahu Tongariki, restored by Chilean archaeologist Claudio Cristino in the 1990s Moai i/ˈmoʊ.aɪ/, or mo‘ai, are monolithic human figures carved by the Rapa Nui people from rock on the Chilean Polynesian island of Easter Island between the years 1250 and 1500.[1] Nearly half are still at Rano Raraku, the main moai quarry, but hundreds were transported from there and set on stone platforms called ahu around the island's perimeter. Almost all moai have overly large heads three-eighths the size of the whole statue. The moai are chiefly the living faces (aringa ora) of deified ancestors (aringa ora ata tepuna).[2] The statues still gazed inland across their clan lands when Europeans first visited the island, but most were cast down during later conflicts between clans. Description[edit] The moai are monolithic statues, their minimalist style related to forms found throughout Polynesia. Six of the fifteen moai at Ahu Tongariki Characteristics[edit] Eyes[edit] Symbolism[edit] Dr.

Roman mythology Roman mythology is the body of traditional stories pertaining to ancient Rome's legendary origins and religious system, as represented in the literature and visual arts of the Romans. "Roman mythology" may also refer to the modern study of these representations, and to the subject matter as represented in the literature and art of other cultures in any period. The Romans usually treated their traditional narratives as historical, even when these have miraculous or supernatural elements. The stories are often concerned with politics and morality, and how an individual's personal integrity relates to his or her responsibility to the community or Roman state. The study of Roman religion and myth is complicated by the early influence of Greek religion on the Italian peninsula during Rome's protohistory, and by the later artistic imitation of Greek literary models by Roman authors. The nature of Roman myth[edit] Founding myths[edit] Other myths[edit] Religion and myth[edit] Foreign gods[edit]

Aztec mythology Mictlantecuhtli (left), god of death, the lord of the Underworld and Quetzalcoatl (right), god of wisdom, life, knowledge, morning star, patron of the winds and light, the lord of the West. Together they symbolize life and death. Aztec mythology is the body or collection of myths of Aztec civilization of Central Mexico.[1] The Aztecs were Nahuatl speaking groups living in central Mexico and much of their mythology is similar to that of other Mesoamerican cultures. According to legend, the various groups who were to become the Aztecs arrived from the north into the Anahuac valley around Lake Texcoco. The location of this valley and lake of destination is clear – it is the heart of modern Mexico City – but little can be known with certainty about the origin of the Aztec. The Mexica/Aztec were said to be guided by their god Huitzilopochtli, meaning "Left-handed Hummingbird" or "Hummingbird from the South." Creation myth[edit] Pantheon[edit] Bibliography[edit] Grisel Gómez Cano (2011).

Irish mythology Bunworth Banshee The mythology of pre-Christian Ireland did not entirely survive the conversion to Christianity. However, much of it was preserved in medieval Irish literature, though it was shorn of its religious meanings. This literature represents the most extensive and best preserved of all the branches of Celtic mythology. Although many of the manuscripts have not survived and much more material was probably never committed to writing, there is enough remaining to enable the identification of distinct, if overlapping, cycles: the Mythological Cycle, the Ulster Cycle, the Fenian Cycle and the Historical Cycle. The sources[edit] The three main manuscript sources for Irish mythology are the late 11th/early 12th century Lebor na hUidre which is in the library of the Royal Irish Academy, the early 12th century Book of Leinster in the Library of Trinity College, Dublin, and the Rawlinson manuscript B 502 (Rawl.), housed in the Bodleian Library at Oxford University. Ulster cycle[edit]

Otherworld The concept of an "otherworld" in historical Indo-European religion is reconstructed in comparative mythology. The term is a calque of orbis alius or "Celtic Otherworld", so named by Lucan in his description of the druidic doctrine of metempsychosis. Comparable religious, mythological or metaphysical concepts, such as a realm of supernatural beings and a realm of the dead, are of course found in cultures throughout the world.[1] Spirits were thought to travel between worlds, or layers of existence, usually along an axis such as a giant tree, a tent pole, a river, a rope or mountains.[1][2][3] Indo-European reconstruction[edit] Celtic[edit] Germanic[edit] Greek[edit] In Greco-Roman mythology the Gods were said to dwell on Mount Olympus whereas the dead usually went to the Underworld or Fortunate Isles after death. References[edit] ^ Jump up to: a b c d e Gods, goddesses, and mythology, Volume 11, C.

{every}nothing wonderful: Tutorial: Repurposed Envelopes (From Magazines to Mailing) Note: If you like this idea, be sure to check out how to make paper ruffles to add to your envelopes! Super quick and easy tutorial for you today. I have a drawer full of these and use them for everything - bills, letters, you name it...my mom does too, actually! I recently received an oversized catalog for baby strollers (why? I have more than one that I barely use). To start just pull pages out of your catalog or magazine with images you love. Other supplies you'll need: Pencil Glue - glue stick or craft glue - whichever you prefer Old envelope or envelope template. If this is a project you see yourself recreating in the future or with other papers you could invest in an envelope template kit, or you can print templates (you'll need to print at 100% on a larger format printer) from Designer's Toolbox on a heavy stock (mount to board for a longer lasting template). Trace the shape of your envelope onto the page, finding the position that you prefer on the image/page. Happy re-purposing!

empathy definition, techniques and training, levels of listening theory, listening even.. home » self/personal development » empathy, trust, listening, diffusing conflict and handling complaints empathy skills - for relationships, communications, complaints, customer retention, conflict and levels of listening types Empathy and trust are a platform for effective understanding, communication and relationships. A certain legacy of the days of the hard-sell is that many consumers and business people are more reluctant to expose themselves to situations where they may be asked to make a decision. Most modern gurus in the areas of communications, management and self-development refer in one way or another to the importance of empathy - really understanding the pther person's position and feelings. Whether for selling, customer retention, handling complaints, diffusing conflict, empathy helps. trust - and understanding the other person's standpoint Part of the 'empathy process' is establishing trust and rapport. The act of doing all this establishes trust. listening In summary first: