What are the 'Top Five' most useful Roman Inventions and why?

5 Things the Romans gave us. Ancient Impossible reveals how many of today’s technological achievements were actually developed centuries ago. 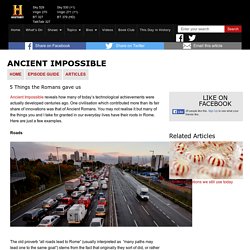 One civilisation which contributed more than its fair share of innovations was that of Ancient Romans. You may not realise it but many of the things you and I take for granted in our everyday lives have their roots in Rome. Here are just a few examples. Roads The old proverb “all roads lead to Rome” (usually interpreted as “many paths may lead one to the same goal”) stems from the fact that originally they sort of did, or rather they came from Rome. 5 Things the Romans gave us. Roman Inventions: The Epic Guide - Know the Romans. Top 10 ancient Roman inventions. Throughout history, the biggest of inventions have defined civilizations, changing the way of life with a single purpose – to make living more enduring and easy with far lesser hindrances. 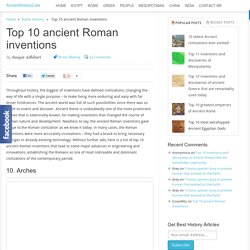 The ancient world was full of such possibilities since there was so much to invent and discover. Ancient Rome is undoubtedly one of the more prominent names that is extensively known, for making inventions that changed the course of human nature and development. Needless to say, the ancient Roman inventions gave shape to the Roman civilization as we know it today. In many cases, the Roman inventions were more accurately innovations – they had a knack to bring necessary changes in already existing technology.

Without further ado, here is a list of top 10 ancient Roman inventions that lead to some major advances in engineering and innovations, establishing the Romans as one of most noticeable and dominant civilizations of the contemporary period. BBC Bitesize - KS2 History - What did the Romans invent?