Women and Prostitution in the Roman Empire

Martial's poems are particularly direct. Ovid's poems "The Art of Love" (Ars Amatoria) could have raised an eye-brow or two given their focus on the woman's pleasure, passive pleasure, which to the Roman's was supposedly of a lesser value than active pleasure. Nonetheless the poems demonstrate that women were more than objects.

Ovid's verses about sitting next to your belle at the races gives us a good glimpse of this. Another interesting aspect can be gained from the numerous examples of paintings found on walls in villas showing images of Priapus - a chap with a bad case of Elephantitis of the penis, or of Mars and Venus doing it behind her husband's back or being discovered at it for all (the Gods) to see. Prostitution in ancient Rome. Prostitution in Ancient Rome was legal and licensed. 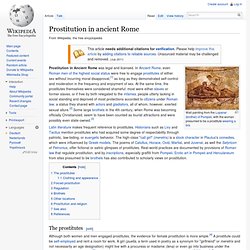 In Ancient Rome, even Roman men of the highest social status were free to engage prostitutes of either sex without incurring moral disapproval,[1] as long as they demonstrated self-control and moderation in the frequency and enjoyment of sex. At the same time, the prostitutes themselves were considered shameful: most were either slaves or former slaves, or if free by birth relegated to the infames, people utterly lacking in social standing and deprived of most protections accorded to citizens under Roman law, a status they shared with actors and gladiators, all of whom, however, exerted sexual allure.[2] Some large brothels in the 4th century, when Rome was becoming officially Christianized, seem to have been counted as tourist attractions and were possibly even state-owned.[3] The prostitutes[edit] Prostitutes could also work out of a brothel or tavern for a procurer or pimp (leno). 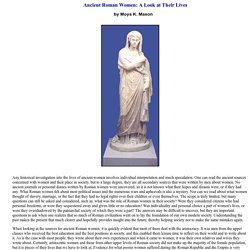 One can read the ancient sources concerned with women and their place in society, but to a large degree, they are all secondary sources that were written by men about women. No ancient journals or personal diaries written by Roman women were uncovered, so it is not known what their hopes and dreams were, or if they had any. What Roman women felt about most political issues and the numerous wars and upheavals is also a mystery. Nor can we read about what women thought of slavery, marriage, or the fact that they had no legal rights over their children or even themselves. The scope is truly limited, but many questions can still be asked and considered, such as: what was the role of Roman women in their society? When looking at the sources for ancient Roman women, it is quickly evident that most of them deal with the aristocracy. Related Papers Notes 1 Jo-Ann Shelton. 3 Ibid. Sexual Equality in the Roman Empire. The Roman Empire was very much a male dominated society; so much so that in the Roman Republic a man could legally kill his wife or daughter if they questioned his authority. 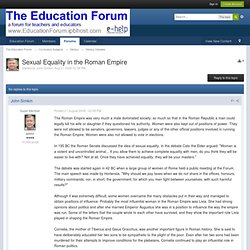 Women in the Roman Empire. Rome was very much a male dominated society; so much so that in the Roman Republic a man could legally kill his wife or daughter if they questioned his authority. 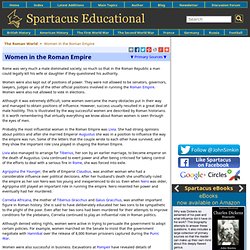 Women were also kept out of positions of power. They were not allowed to be senators, governors, lawyers, judges or any of the other official positions involved in running the Roman Empire. Women were also not allowed to vote in elections. Although it was extremely difficult, some women overcame the many obstacles put in their way and managed to obtain positions of influence. However, success usually resulted in a great deal of male hostility. Probably the most influential woman in the Roman Empire was Livia. Livia also managed to arrange for Tiberius, her son by an earlier marriage, to become emperor on the death of Augustus.

Agrippina the Younger, the wife of Emperor Claudius, was another woman who had a considerable influence over political decisions. Women were also successful in business. Hadrian acted quickly.