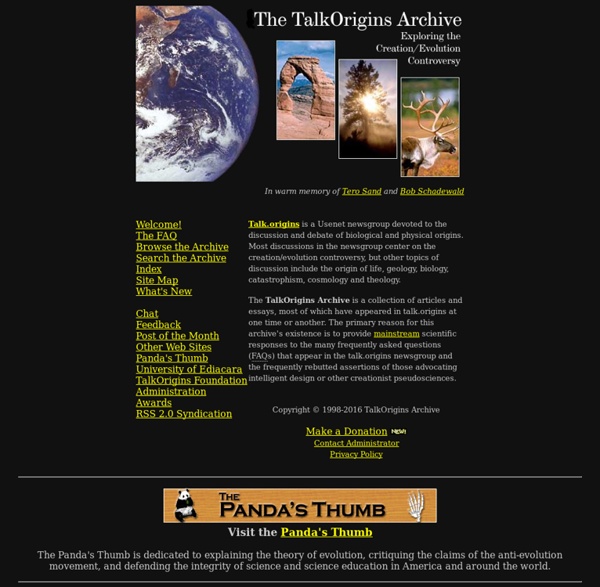 Talk.origins is a Usenet newsgroup devoted to the discussion and debate of biological and physical origins. Most discussions in the newsgroup center on the creation/evolution controversy, but other topics of discussion include the origin of life, geology, biology, catastrophism, cosmology and theology. The TalkOrigins Archive is a collection of articles and essays, most of which have appeared in talk.origins at one time or another. The primary reason for this archive's existence is to provide mainstream scientific responses to the many frequently asked questions (FAQs) that appear in the talk.origins newsgroup and the frequently rebutted assertions of those advocating intelligent design or other creationist pseudosciences.

A New Theory of the Universe: an article by Robert Lanza about biocentrism building on quantum physics by putting life into the equation Essays - Spring 2007 Print Biocentrism builds on quantum physics by putting life into the equation By Robert Lanza The Impossible Voyage of Noah's Ark Building the Ark Accommodating All Those Animals Leaving Some Things Behind Sizing Up the Load Gathering the Cargo Phylogeny/Island Biogeography PREFACE ISLAND BIOGEOGRAPHY and Evolution is an activity about the evolution of three species of lizards on the Canary Islands. It is designed for high school biology students. Its purpose is to demonstrate to students that evolutionary problems are complex, and solutions may involve data from various disciplines of science. First, students must arrive at different phylogenetic solutions using only geographical and geological data. Then, students compare the morphology of the species involved, arriving at a more traditional solution to phylogeny. Finally, students deduce a phylogeny based on genetic distance using DNA sequences from cutting edge biotechnology.

Post-Modern Science: The Illusion of Consciousness Sees Through Itself    We have always struggled with the limits to how human language can express our thoughts about reality. But post-modern science dismisses the struggle as futile: We did not evolve to perceive reality. That conviction is changing cosmology dramatically. We know almost nothing about the human consciousness but naturalism must treat it as evolved from unconscious elements. Much confusion is avoided by recognizing that that is a core assumption, not a discovery. Marine counterparts of land creatures The idea that there are specific marine counterparts to land creatures,[1] inherited from the writers on natural history in Antiquity, was firmly believed in Islam[2] and in Medieval Europe, and is exemplified by the creatures represented in the medieval animal encyclopedias called bestiaries and in the parallels drawn in the moralising attributes attached to each. "The creation was a mathematical diagram drawn in parallel lines," T.H. White said a propos the bestiary he translated. "Things did not only have a moral they often had physical counterparts in other strata.

Human Evolution: The fossil evidence in 3D Welcome to the UCSB online 3D gallery of modern primate relatives and fossil ancestors of humans. This gallery contains five modern primate crania, and five fossil crania. The crania can be rotated 360 degrees. resources The Institute for the Future (IFTF) is an independent nonprofit research group, working with organizations of all kinds to help them make better, more informed decisions about the future. IFTF provides the foresight to create insights that lead to action, and brings a combination of tools, methodologies, and a deep understanding of emerging trends and discontinuities to its work with companies, foundations, and government agencies. IFTF takes an explicitly global approach to strategic planning, linking macro trends to local issues in such areas as: - Work and daily life - Technology and society - Health and health care - Global business trends - Changing consumer society The Institute is based in California's Silicon Valley, in a community at the crossroads of technological innovation, social experimentation, and global interchange.