Why Captain Higgins is my favorite parasitic flatworm 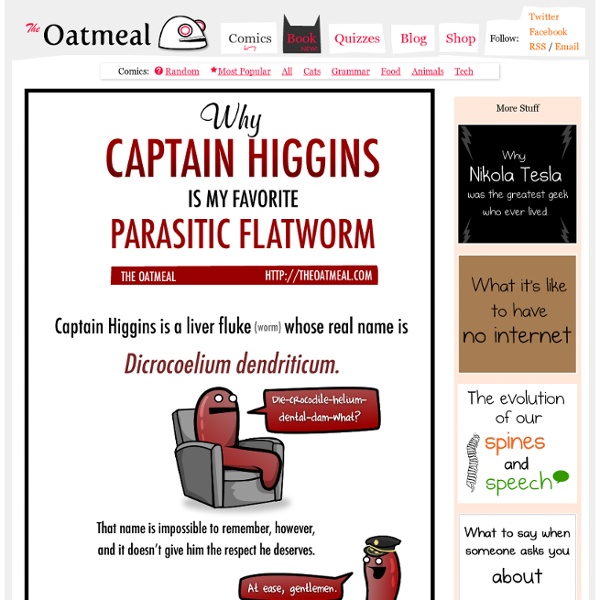 a good book | mummy comics I blame you for the funny looks I get from the people at my office when they hear me laugh thank you for reading. I blame you for the funny looks I get from people in the cafe/bookstore when they hear me CACKLE. thank you for cackling. haha xD i love this one =3 good job ^^ An analysis on why rape jokes are so funneh. that post you linked to makes a good point. however, this is not a rape joke; this is a joke about clichéd story ideas. many writers use sexual abuse as a story mechanism. i was making a comment on the absurdity of using something like rape as a way to move the story forward or develop characters. not that i have any qualms about making comics about anything i find interesting or meaningful or absurd, but i thought i should explain this one because it is getting a lot of traffic and seems to be provoking a knee-jerk reaction from more than a few people. thank you for commenting. Hey, that’s not funny. Not funny at all. I swear, your comments make the comics even better Good day. ).

Mind altering microbes Part I: Suicidal crickets I went to a fantastic departmental seminar yesterday by Associate Professor Mark Thomas about how parasites are able to manipulate the behaviour of their unfortunate host, usually as a means of enhancing transmission or to enable the parasite to reach the next phase of its life cycle. I wanted to share some of the fantastic examples Mark talked about, starting with suicidal crickets. A few years ago, FrÃ©dÃ©ric Thomas and colleagues described (1) how crickets infected with hairworms (Nematomorpha) commit suicide by jumping into water. This is necessary behaviour on the part of the hairworm as the parasites spend their adult lives free-living in aquatic environments where they mate and produce eggs. During a field study, the authors collected crickets either from the forest or around a swimming pool, and found very different rates of infection: 15% (5/33) for forest-caught crickets compared with 95% (36/38) for those collected around the swimming pool. So there you have it. 1. 2.

Triple Helix: Designing a New Molecule of Life: Scientific American For all the magnificent diversity of life on this planet, ranging from tiny bacteria to majestic blue whales, from sunshine-harv­­est­­ing plants to mineral-digesting endoliths miles underground, only one kind of “life as we know it” exists. All these organisms are based on nucleic acids—DNA and RNA—and proteins, working together more or less as described by the so-called central dogma of molecular biology: DNA stores information that is transcribed into RNA, which then serves as a template for producing a protein. The proteins, in turn, serve as important structural elements in tissues and, as enzymes, are the cell’s workhorses. Yet scientists dream of synthesizing life that is utterly alien to this world—both to better understand the minimum components required for life (as part of the quest to uncover the essence of life and how life originated on earth) and, frankly, to see if they can do it. Select an option below: Customer Sign In

Forever Alone Prank Flash Mob | Strange Beaver How to use a semicolon Social disorder | Ariadne There has been much debate all over the place about the causes of the recent riots in the UK. Similar discussion and analyses occurred following the ‘Arab spring’ uprisings earlier in the year. In this post I look at signals and trends that are being used to forecast social disorder in various parts of the world. Conflicts over resources (food, water, oil, minerals) are regarded as underlying causes for some local or regional unrest. Poverty, corruption, and social inequality (among other issues) have been cited as factors in the Arab spring uprisings, as well as in the UK. However, riots and other forms of social upheaval rarely show simple cause and effect relationships. A recent paper by Marco Lagi et al notes that high food prices are an underlying cause for many riots, but by themselves aren’t the trigger. [For the record, and by-the-by, I don’t consider that this prediction supports the so-called Mayan end-of-the-world catastrophe! Future prospects What are the risks in New Zealand?