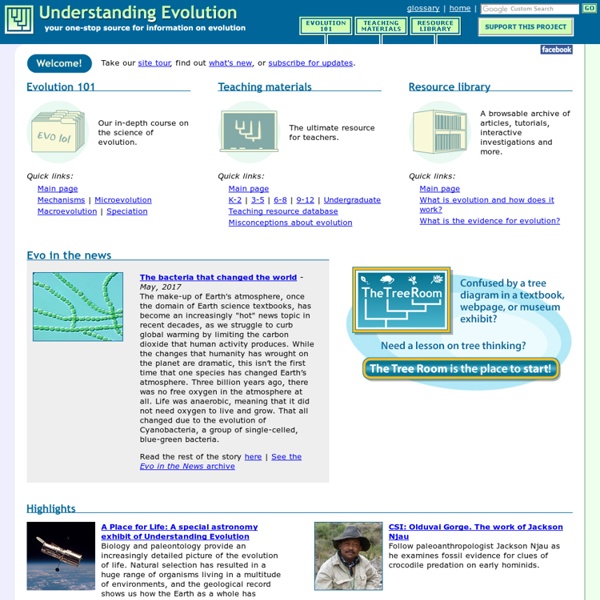 The bacteria that changed the world - May, 2017 The make-up of Earth's atmosphere, once the domain of Earth science textbooks, has become an increasingly "hot" news topic in recent decades, as we struggle to curb global warming by limiting the carbon dioxide that human activity produces. While the changes that humanity has wrought on the planet are dramatic, this isn’t the first time that one species has changed Earth’s atmosphere. Three billion years ago, there was no free oxygen in the atmosphere at all. Life was anaerobic, meaning that it did not need oxygen to live and grow. That all changed due to the evolution of Cyanobacteria, a group of single-celled, blue-green bacteria. Read the rest of the story here | See the Evo in the News archive

Google Earth phylogenies Now, for something completely different. I've been playing with Google Earth as a phylogeny viewer, inspired by Bill Piel's efforts, the cool avian flu visualisation Janies et al. published in Systematic Biology (doi:10.1080/10635150701266848), and David Kidd's work. As an example, I've taken a phylogeny for Banza katydids from Shapiro et al. (doi:10.1016/j.ympev.2006.04.006), and created a KML file. Lesson: evolution mini-lesson: A Step in Speciation Time: Two 50-minute periods Preparation: 1. Make color copies of the salamander sheets (one per team of 2-4); place these in non-glare transparent plastic notebook sleeves to protect from wear and tear as they are re-used every period and year. 2.

Everything Dies, Right? But Does Everything Have To Die? Here's A Surprise : Krulwich Wonders... A puzzlement. Why, I wonder, are both these things true? There is an animal, a wee little thing, the size of a poppy seed, that lives in lakes and rivers and eats whatever flows through it; it's called a gastrotrich. It has an extremely short life. BioInteractive Search Results Series Where and when did humans arise? What distinguishes us from other species? Did our distant ancestors look and behave like us? How has the amazing diversity of plants and animals evolved?

Speciation For example, these happy face spiders look different, but since they can interbreed, they are considered the same species: Theridion grallator. Also, many plants, and some animals, form hybrids in nature. Hooded crows and carrion crows look different, and largely mate within their own groups—but in some areas, they hybridize.

Type the email address of the account you want to sign in with. We're having trouble locating your account. Which type of account do you want to use? 100 Years of Breed “Improvement” For the sake of honest disclosure, I will admit to owning “purebreds” (the ‘pureness’ of purebreeds is a discussion for another time) but I also have mutts. All the dogs I’ve had since childhood had a few things in common, they were friendly, prey driven, ball-crazy, intense, motivated, athletic (crazy dogs are easier to train) and none had intentionally bred defects. I would never buy/adopt a dog whose breed characteristics exacted a health burden.(Asher 2009). That just incentivizes people to breed more of these intentionally unhealthy animals. Researcher Academy - Manuscript Fundamentals As you embark on your publishing career, it can feel like there’s an endless array of procedures, protocols and best practice to absorb. In this series of modules, we walk you through some of the key points you should pay attention to during that all-important manuscript preparation stage. We explain how the publishing cycle works from submission and peer review through to decision time!