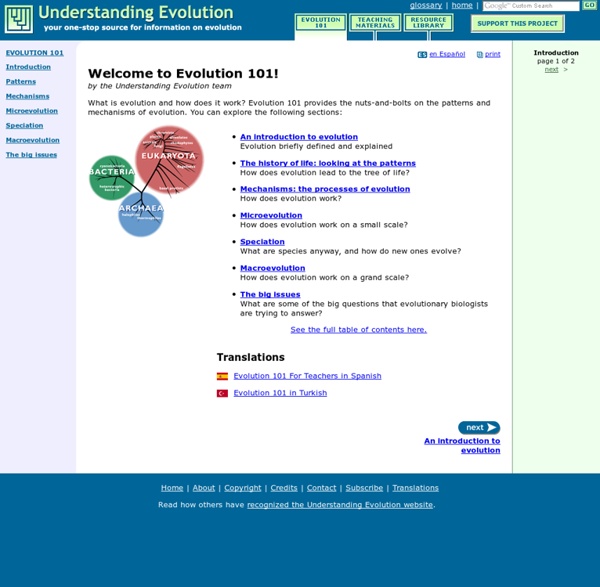 12 Elegant Examples of Evolution - Wired Science In preparation for Charles Darwin’s upcoming 200th birthday, the editors of Nature compiled a selection of especially elegant and enlightening examples of evolution. They describe it as a resource "for those wishing to spread awareness of evidence for evolution by natural selection." Given the continuing battles over evolution in America’s public schools — and, for that matter, the Islamic world — such a resource is most welcome. However, I’d like to suggest another way of looking at the findings below, which range from the moray eel’s remarkable second jaw to the unexpected plumage of dinosaurs.

The Immortal Life « Rebecca Skloot Her name was Henrietta Lacks, but scientists know her as HeLa. She was a poor black tobacco farmer whose cells—taken without her knowledge in 1951—became one of the most important tools in medicine, vital for developing the polio vaccine, cloning, gene mapping, in vitro fertilization, and more. Henrietta’s cells have been bought and sold by the billions, yet she remains virtually unknown, and her family can’t afford health insurance. Soon to be made into an HBO movie by Oprah Winfrey and Alan Ball, this New York Times bestseller takes readers on an extraordinary journey, from the “colored” ward of Johns Hopkins Hospital in the 1950s to stark white laboratories with freezers filled with HeLa cells, from Henrietta’s small, dying hometown of Clover, Virginia, to East Baltimore today, where her children and grandchildren live and struggle with the legacy of her cells.

Evolution - Home Mark Ridley's Evolution has become the premier undergraduate text in the study of evolution. Readable and stimulating, yet well balanced and in-depth, this text tells the story of evolution, from the history of the study to the most recent developments in evolutionary theory. The third edition of this successful textbook features updates and extensive new coverage. The sections on adaptation and diversity have been reorganized for improved clarity and flow, and a completely updated section on the evolution of sex and the inclusion of more plant examples have all helped to shape this new edition.

Darwin Online: Darwin's Publications British Entomology [←click finches for illustrations] 1829-1832. [Records of captured insects]. In Stephens, Illustrations of British entomology. Text PDF F1968 Interactive Documentary Becoming Human is an interactive documentary experience that tells the story of our origins. Journey through four million years of human evolution with your guide, Donald Johanson. Transcripts are available in the following languages: English, Spanish, Italian, Chinese, and Sinhala. Understanding Evolution The bacteria that changed the world - May, 2017 The make-up of Earth's atmosphere, once the domain of Earth science textbooks, has become an increasingly "hot" news topic in recent decades, as we struggle to curb global warming by limiting the carbon dioxide that human activity produces. While the changes that humanity has wrought on the planet are dramatic, this isn’t the first time that one species has changed Earth’s atmosphere. Three billion years ago, there was no free oxygen in the atmosphere at all. Life was anaerobic, meaning that it did not need oxygen to live and grow. That all changed due to the evolution of Cyanobacteria, a group of single-celled, blue-green bacteria.

Hybrid SHEEP AND GOATS In "The Variation Of Animals And Plants Under Domestication" Charles Darwin wrote: "Captain Hutton, in India, crossed a tame goat with a wild one from the Himalaya, and he remarked to me how surprisingly wild the offspring were." Although sheep and goats seem similar and can be mated together, any offspring are generally stillborn due to chromosome mismatch (sheep have 54, goats have 60). At Botswana Ministry of Agriculture, a ram housed with a nanny goat impregnated the goat and a live offspring was produced with 57 chromosomes. It was called "The Toast of Batswana" and is intermediate in type: coarse outer, woolly inner coat, long goat-like legs and heavy sheep-like body.

How do paleontologists excavate fossils The number of fossils found compared to the actual number of plants and animals that are known to have lived on Earth is very small. That's because for something to fossilize, it must die in perfect conditions, and that doesn't happen too often. So excavating the fossils that do exist is a meticulous process. Typically, paleontologists will use delicate tools like paintbrushes and dental picks to slowly remove any rock material that surrounds the fossil. They may also use mist to soften the rock sediment.