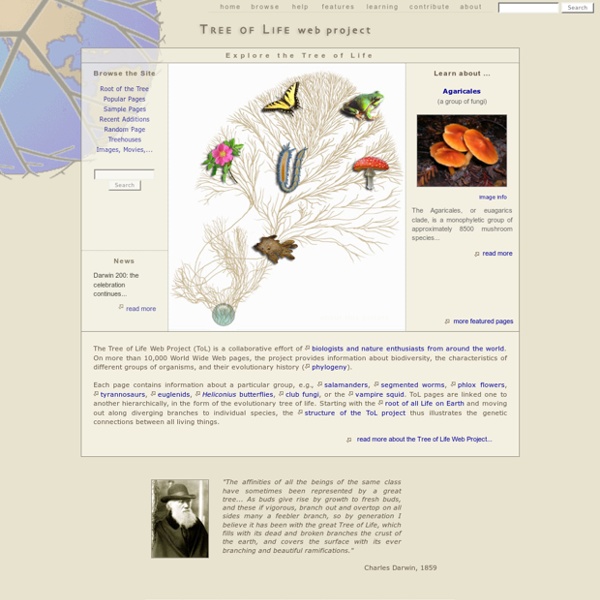 The Tree of Life Web Project (ToL) is a collaborative effort of biologists and nature enthusiasts from around the world. On more than 10,000 World Wide Web pages, the project provides information about biodiversity, the characteristics of different groups of organisms, and their evolutionary history (phylogeny). Each page contains information about a particular group, e.g., salamanders, segmented worms, phlox flowers, tyrannosaurs, euglenids, Heliconius butterflies, club fungi, or the vampire squid. ToL pages are linked one to another hierarchically, in the form of the evolutionary tree of life. Related:  Tool

Home | Catalogue of Life Home masaru emoto In all of these experiments, distilled water for hospital usage produced by the same company was used. Since it is distilled twice, it can be said that it is pure water. The result was that we always observed beautiful crystals after giving good words, playing good music, and showing, playing, or offering pure prayer to water. On the other hand, we observed disfigured crystals in the opposite situation. Moreover, we never observed identical crystals. I published these results as photograph collections: “Messages from Water 1” (1999), “Messages from Water 2” (2002), “Messages from Water 3” (2004), and “Messages from Water 4” (2008). This world is filled with wonders and mysteries that get more incomprehensible if we try to think of a reason. Thus, except for some of truly basic things, no one disagrees that there are still so many unknowns. Combination of non-resonating vibration can result in destructive energy, and nothing can be created out of it.

The Immortal Life of Henrietta Lacks With Henrietta unconscious on the operating table…though no one asked if she wanted to be a donor—[Dr.] Wharton picked up a sharp knife and shaved two dime-sized pieces of tissue from Henrietta’s cervix. – The Immortal Life of Henrietta Lacks, pg. 33 Informed consent is a legal procedure to ensure that a patient or client knows all of the risks and costs involved in a treatment. The elements of informed consents include informing the client of the nature of the treatment, possible alternative treatments, and the potential risks and benefits of the treatment. A Guide to Understanding Informed Consent (National Cancer Institute) Making a decision about participating in a research study involves understanding the potential risks and benefits as well as your rights and responsibilities. Related News Stories U.S. scientists knew 1940s Guatemalan STD studies were unethical, panel finds (Washington Post) August 29, 2011.

Natural Fibers: - Uttarakhand Bamboo & Fiber Development Board Fibers of both plant and animal origins have been utilized since the beginning of human civilization. They have been used to provide shelter and clothing to shield us against the extremities of nature and paper to record history. A host of household utility items like baskets, sacks, ropes, and rugs have also been made through them as is still done in rural areas of the developing world. In contemporary times, natural fibers form an important component of the clothing and home textiles and are increasingly being used in industrial applications which range from paper and packaging to composite materials used in automobile parts. In several developing countries, the proceeds from the sale and export of natural fibers contributes significantly to the income and food security of marginal farmers and others in the field of processing and marketing natural fiber. Status of Natural Fibers in Uttarakhand Hemp: (Cannabis sativa L.) Policy on Legalisation of Hemp in Uttarakhand

Learn2Grow AMKK（東 信、花樹研究所） » HOUSE VISION 2013 TOKYO EXHIBITION：TOTO・YKK AP AMKK（東 信、花樹研究所） HOUSE VISION 2013 TOKYO EXHIBITION TOTO・YKK AP × 成瀬友梨・猪熊純「極上の間」 DATE：2013年3月２日(土)～24日(日) TIME : 11:00～20:00 (最終入場受付19:30） PLACE：臨海副都心J区（東京都江東区青海2丁目1） Lipids Lipids The lipids are a large and diverse group of naturally occurring organic compounds that are related by their solubility in nonpolar organic solvents (e.g. ether, chloroform, acetone & benzene) and general insolubility in water. There is great structural variety among the lipids, as will be demonstrated in the following sections. Fats, Oils, Waxes & Phospholipids 1. The common feature of these lipids is that they are all esters of moderate to long chain fatty acids. The higher melting points of the saturated fatty acids reflect the uniform rod-like shape of their molecules. Two polyunsaturated fatty acids, linoleic and linolenic, are designated "essential" because their absence in the human diet has been associated with health problems, such as scaley skin, stunted growth and increased dehydration. Because of their enhanced acidity, carboxylic acids react with bases to form ionic salts, as shown in the following equations. 2. 3. 4. Waxes are widely distributed in nature. 5. Terpenes

Free Online Picture Resizer - Crop and Resize photos, images, or pictures online for FREE! Vegetable Gardening Plans & Designs for an Indoor or Outdoor Garden WTF Is This Weird Web-Tower Thing? We Asked Around. No One Knows | Science So far, no one knows what’s crafting these enigmatic structures. Update, 1 p.m.: We’ve added comments from several more experts, below. Something in the Peruvian Amazon is making weird, intricate structures that resemble white picket fences surrounding an Isengard-like spire. No one has any idea who the mysterious craftsbug (fungus? spider?) The first of the fence-and-spire structures, spotted June 7. Troy Alexander, a graduate student at Georgia Tech, spotted the first of these structures on June 7. “All of them were on the small island used to view the parrot clay lick at Tambopata Research Center,” Alexander said. We noticed the weirdness last Thursday, when Phil Torres, a biologist who also works at Tambopata, posted a link on Twitter. But it turns out that even scientists who study such things haven’t a clue. “I have no idea what made it, or even what it is,” said William Eberhard, an entomologist with the Smithsonian Tropical Research Institute. *Here are a few more: