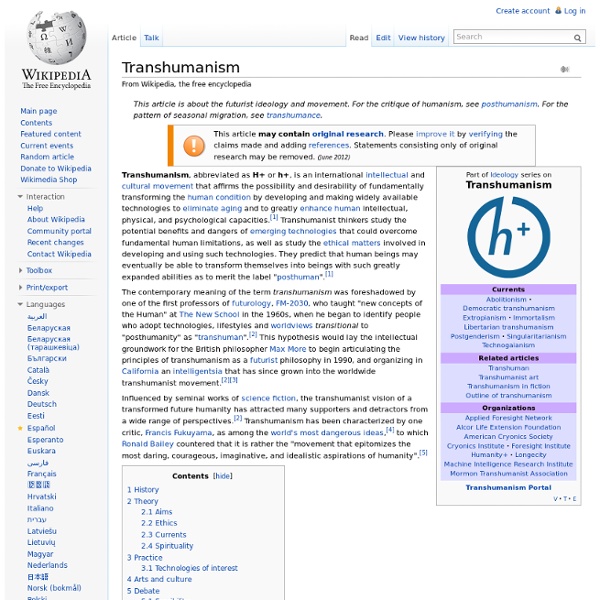 Transhumanism (abbreviated as H+ or h+) is an international cultural and intellectual movement with an eventual goal of fundamentally transforming the human condition by developing and making widely available technologies to greatly enhance human intellectual, physical, and psychological capacities.[1] Transhumanist thinkers study the potential benefits and dangers of emerging technologies that could overcome fundamental human limitations, as well as the ethics of developing and using such technologies. They speculate that human beings may eventually be able to transform themselves into beings with such greatly expanded abilities as to merit the label "posthuman".[1] History[edit] According to Nick Bostrom,[1] transcendentalist impulses have been expressed at least as far back as in the quest for immortality in the Epic of Gilgamesh, as well as historical quests for the Fountain of Youth, Elixir of Life, and other efforts to stave off aging and death. First transhumanist proposals[edit]

Why Finnish babies sleep in cardboard boxes Image copyright Milla Kontkanen For 75 years, Finland's expectant mothers have been given a box by the state. It's like a starter kit of clothes, sheets and toys that can even be used as a bed. And some say it helped Finland achieve one of the world's lowest infant mortality rates. It's a tradition that dates back to the 1930s and it's designed to give all children in Finland, no matter what background they're from, an equal start in life. The maternity package - a gift from the government - is available to all expectant mothers. Transcranial direct-current stimulation Transcranial direct current stimulation (tDCS) is a form of neuromodulation that uses constant, low direct current delivered via electrodes on the head. It can be contrasted with cranial electrotherapy stimulation, which generally uses alternating current the same way.[1] It was originally developed to help patients with brain injuries or psychiatric conditions like major depressive disorder.

Futures studies Moore's law is an example of futures studies; it is a statistical collection of past and present trends with the goal of accurately extrapolating future trends. Futures studies (also called futurology and futurism) is the study of postulating possible, probable, and preferable futures and the worldviews and myths that underlie them. There is a debate as to whether this discipline is an art or science. In general, it can be considered as a branch of the social sciences and parallel to the field of history.

Naked Came the Stranger Cover of reissue of Naked Came the Stranger Naked Came the Stranger is a 1969 novel written as a literary hoax poking fun at contemporary American culture. Though credited to "Penelope Ashe", it was in fact written by a group of twenty-four journalists led by Newsday columnist Mike McGrady. Wormwood: Gentleman Corpse Wormwood: Gentleman Corpse is the second solo comic book series by creator Ben Templesmith . Unlike the bleak post-apocalyptic world of Templesmith's previous work, Singularity , Wormwood is a lighter series which combines humor and horror. It was first published as short episodic serials within LOFI magazine from 2004 until it ceased publication. IDW Publishing then collected those serials in a single #0 issue called The Taster in 2006 before releasing new stories in the form of several miniseries, the most recent being Calamari Rising . The hardcover edition of the initial series has gone on to be a New York Times bestseller. [ 1 ]

Artificial intelligence Intelligence demonstrated by machines Artificial intelligence (AI) is intelligence demonstrated by machines, unlike the natural intelligence displayed by humans and animals, which involves consciousness and emotionality. The distinction between the former and the latter categories is often revealed by the acronym chosen. 'Strong' AI is usually labelled as AGI (Artificial General Intelligence) while attempts to emulate 'natural' intelligence have been called ABI (Artificial Biological Intelligence). Is 'Adventure Time' One Big Allegory For Discovering Sex? Cuber presents five more short graybles in latest "Adventure Time." Cartoon Network Watching last night's anthology episode of "Adventure Time," entitled "Five More Short Graybles," I was reminded of the crazed photographer in Leos Carax's "Holy Motors" when he first spots the scraggly-haired Merde character, played by Denis Lavant, in the middle of a crowd and can't stop snapping pictures: "So... weird! So weird!"

John Gottman John Gottman with his wife Julie John Mordecai Gottman (born April 26, 1942) is a Professor emeritus in psychology known for his work on marital stability and relationship analysis through scientific direct observations many of which were published in peer-reviewed literature. The lessons derived from this work represent a partial basis for the relationship counseling movement which aim to improve relationship functioning and the avoidance of those behaviors shown by Gottman and other researchers to harm human relationships. [ 1 ] Gottman is a Professor Emeritus of psychology at the University of Washington . With his wife Julie Schwartz, Gottman heads a non-profit research institute (The Relationship Research Institute) and a for-profit therapist training entity (The Gottman Institute). [ 2 ] Gottman was recognized in 2007 as one of the ten most influential therapists of the past quarter century.

In Montreal The Swings Are Alive With The Sound Of Music These are sweetnote dreamswings an innovation in play and sound. The 21 swings installation is located in Montreal’s Quartier des spectacles on the Promenade des Artistes. This is part of the city’s celebrated arts district where the Jazz Festival and Just for Laughs strut their stuff. Now strangers can make music together by leaning back and kicking for the sky. Guts Printed in Playboy magazine March 2004 Inhale. Take in as much air as you can. This story should last about as long as you can hold your breath, and then just a little bit longer. So listen as fast as you can. Life extension The sale of putative anti-aging products such as nutrition, physical fitness, skin care, hormone replacements, vitamins, supplements and herbs is a lucrative global industry, with the US market generating about $50 billion of revenue each year.[2] Some medical experts state that the use of such products has not been proven to affect the aging process, and many claims of anti-aging medicine advocates have been roundly criticized by medical experts, including the American Medical Association.[2][3][4][5][6] Public opinion[edit] Life extension is a controversial topic due to fear of overpopulation and possible effects on society.[10] Religious people are no more likely to oppose life extension than the unaffiliated,[11] though some variation exists between religious denominations.