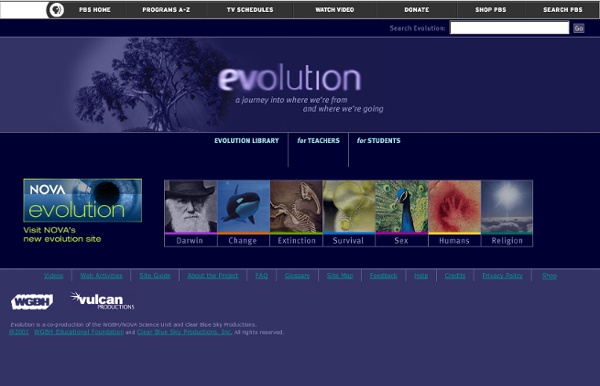 Understanding Evolution The bacteria that changed the world - May, 2017 The make-up of Earth's atmosphere, once the domain of Earth science textbooks, has become an increasingly "hot" news topic in recent decades, as we struggle to curb global warming by limiting the carbon dioxide that human activity produces. While the changes that humanity has wrought on the planet are dramatic, this isn’t the first time that one species has changed Earth’s atmosphere. Three billion years ago, there was no free oxygen in the atmosphere at all. Life was anaerobic, meaning that it did not need oxygen to live and grow. That all changed due to the evolution of Cyanobacteria, a group of single-celled, blue-green bacteria.

Speciation For example, these happy face spiders look different, but since they can interbreed, they are considered the same species: Theridion grallator. Also, many plants, and some animals, form hybrids in nature. Hooded crows and carrion crows look different, and largely mate within their own groups—but in some areas, they hybridize.

Best Websites If you're looking for the best websites on the web, you've come to the right place. MakeUseOf has been reviewing the best websites and the coolest websites for years now, so we've decided to offer a comprehensive list of which websites we consider to be the best of the best. All of the websites on this page are organized into categories, and we've selected only those we believe to be the best ones - those which will most likely be useful to you. We update this page frequently, so check back often and spread the word! Most popular online source for everything related to movies. Movie ratings & reviews, various top rated lists, HD movie trailers, news and lots more. Whale Fossil Found in Kitchen Counter May 5, 2009—After a factory had found a 40-million-year-old whale fossil in a limestone kitchen counter, researchers investigated the stone's fossil-packed Egyptian quarry, which could shed light on the origins of African wildlife. Video by Public Television's Wild Chronicles, from National Geographic Mission Programs Unedited Transcription

The Endosymbiosis Theory: Evolution of Cells - Free Intro to Biology Video Evolutionary Chimera Several mythological creatures are combinations of animals. For example, the griffin is a combination of a lion and an eagle, while the jackalope is combination of a jackrabbit and an antelope. The most notorious combination of animals is that of a lion, serpent and goat. Tree of Life Web Project The Tree of Life Web Project (ToL) is a collaborative effort of biologists and nature enthusiasts from around the world. On more than 10,000 World Wide Web pages, the project provides information about biodiversity, the characteristics of different groups of organisms, and their evolutionary history (phylogeny). Each page contains information about a particular group, e.g., salamanders, segmented worms, phlox flowers, tyrannosaurs, euglenids, Heliconius butterflies, club fungi, or the vampire squid. ToL pages are linked one to another hierarchically, in the form of the evolutionary tree of life. Starting with the root of all Life on Earth and moving out along diverging branches to individual species, the structure of the ToL project thus illustrates the genetic connections between all living things.

Lesson: evolution mini-lesson: A Step in Speciation Time: Two 50-minute periods Preparation: 1. Make color copies of the salamander sheets (one per team of 2-4); place these in non-glare transparent plastic notebook sleeves to protect from wear and tear as they are re-used every period and year. 2. 100 Incredibly Useful and Interesting Web Sites - PCWorld Even as the Web has become more entertaining--and certainly better looking--over the past 15 years, it has also become much more useful and practical, as the 100 sites in this feature will demonstrate. I've organized the sites in the list by the type of task they help you with. It is not a ranking; in each category I recommend sites that specialize in a different area than the others. I've also mixed in a smattering of sites that you might not use every day, but that provide ready answers to specific questions like "How can I learn to rumba?"

Endangered Relationships: Lesson Overview (Click here for a printer-friendly version of this lesson) TOPIC/SUBJECT MATTER: Life Science/Environmental Science TIME ALLOTMENT: 1-2 45-minute class periods This lesson uses video segments from the NATURE film “Crash: A Tale of Two Species” to explore the interrelationship between the horseshoe crab and a small migratory bird called the red knot. Both species are in decline, and the red knot’s future, in particular, depends on the horseshoe crab making a comeback in the waters of the Delaware Bay. Tree of Life Web Project The Tree of Life Web Project (ToL) is a collaborative effort of biologists and nature enthusiasts from around the world. On more than 10,000 World Wide Web pages, the project provides information about biodiversity, the characteristics of different groups of organisms, and their evolutionary history (phylogeny). Each page contains information about a particular group, e.g., salamanders, segmented worms, phlox flowers, tyrannosaurs, euglenids, Heliconius butterflies, club fungi, or the vampire squid.

SEQUENCING TIME TELLING THE history of the earth requires placing events in sequence so that reference can be given to the relative and/or numerical time at which each event occurred. This helps to make sense out of the enormous expanse of time that has elapsed since the origin of the earth. This activity will help students to understand the methods used by geologists in creating the Geologic Time Scale. Objectives: 1) Students will place events in sequence and assign relative times to each event. 2) Students will gain an understanding of relative and numerical time. 3) Students will become familiar with the methods used by scientists to develop the Geologic Time Scale. Explore this link for additional information on the topics covered in this lesson: Geologic Time

Ten Recent Advances in Evolution By Carl Zimmer Posted 10.26.09 NOVA To celebrate the 150th anniversary of the Origin of Species, here's a list—by no means exhaustive—of some of the biggest advances in evolutionary biology over the past decade. These advances include not just a better understanding of how this or that group of species first evolved, but insights into the evolutionary process itself. In some cases those insights would have given Darwin himself a pleasant jolt of surprise. Ten significant leaps forward in evolution research in the past decade, as chosen and described by noted science writer Carl Zimmer Enlarge Photo credit: (Earth) © NASA; (text) © WGBH Educational Foundation Darwin envisioned natural selection acting so slowly that its effects would be imperceptible in a human lifetime.