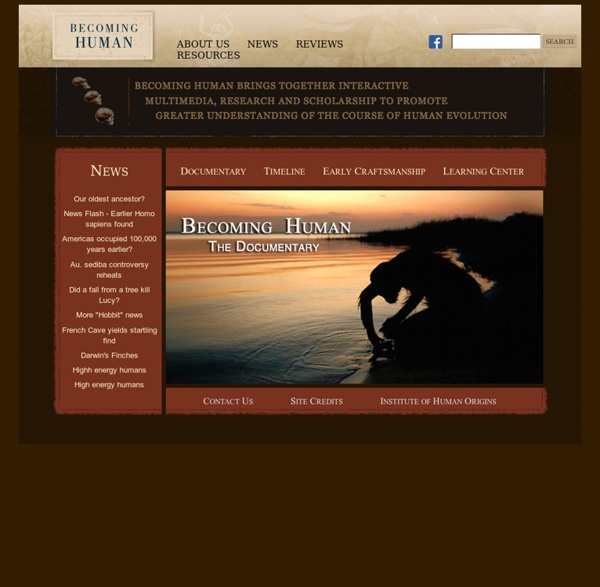 An introduction to the history and crafting of early stone tools - Launch the PresentationExplore human lineage through time: discover your roots over a span of 7 million years - Launch the Interactive TimelineJourney through the story of human evolution in an interactive documentary experience - Launch the Documentary Becoming Human is an interactive documentary experience that tells the story of our origins. Journey through four million years of human evolution with your guide, Donald Johanson. Download for PC or Download for Mac Building Bodies Upright posture and the ability to walk on two legs are crucial, major adaptations associated with the divergence of the human lineage from a common ancestor with the African apes. Learn how we stood up!

Ishango bone The Ishango bone is a bone tool, dated to the Upper Paleolithic era. It is a dark brown length of bone, the fibula of a baboon,[1] with a sharp piece of quartz affixed to one end, perhaps for engraving. It was first thought to be a tally stick, as it has a series of what has been interpreted as tally marks carved in three columns running the length of the tool, but some scientists have suggested that the groupings of notches indicate a mathematical understanding that goes beyond counting. BioInteractive Search Results Series Where and when did humans arise? What distinguishes us from other species? Classical Period, 900 - 290 BC Detailed Timeline of European History Classical Period (900 - 290 BC) Beginning of Western Culture and Philosophy Go to European History Interactive Map Classical Period Europe Interactive Map

Stephen Hawking: "Humans Have Entered a New Stage of Evolution" Although It has taken homo sapiens several million years to evolve from the apes, the useful information in our DNA, has probably changed by only a few million bits. So the rate of biological evolution in humans, Stephen Hawking points out in his Life in the Universe lecture, is about a bit a year. "By contrast," Hawking says, "there are about 50,000 new books published in the English language each year, containing of the order of a hundred billion bits of information. Of course, the great majority of this information is garbage, and no use to any form of life. A brief history of the brain Read full article Continue reading page |1|2|3|4 New Scientist tracks the evolution of our brain from its origin in ancient seas to its dramatic expansion in one ape – and asks why it is now shrinking See gallery: Your brain's family album, from hydra to human IT IS 30,000 years ago.

The 5 Strangest Things Evolution Left in Your Body If you don't believe in evolution, you have to spend a lot of time wondering about the useless shit the creator threw into our bodies. Why don't our wisdom teeth fit in our heads? Why do we need an appendix? The answer is that evolution is a sloppy and haphazard process. Take a close look at your body and you'll see some of the leftover junk.

BioInteractive Search Results Lectures How reasoning and evidence are used to understand human evolution. Genetic evidence shows that humans evolved in Africa and continue to evolve. Tradition and Memory: World Civilizations to 1500 Welcome to the World Wide Web resources, student work, and student discussion attached to General Education 110, World Cultures to 1500, taught by Richard Hooker at Washington State University. This web course has a long and productive history involving students in collaborative and constructivist work with each other and with others outside the course. This course is now being offered as a distance-learning course integrating distant learners with the on-site classroom. If you are not taking the course, feel free to look at our schedule and our readings and join in on our discussions and our "discussion quizzes" with your ideas and knowledge. Please limit your discussion to material around the current week's work; if you have comments or ideas about other parts of the course or readings, send them to me.